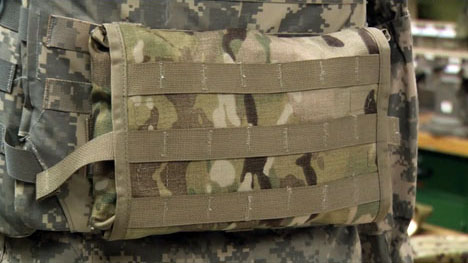 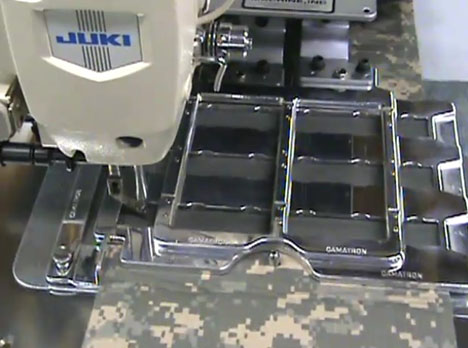 Once you design a bag and want to go into mass production, chances are you start looking at China. But that's not an option for the U.S. military, and since seeing military gear designer Rich Landry's IFAK project, we've been wondering where they mass produce their stuff once Landry perfects the prototypes.

We can't say for sure which company the Army contracts, but we believe we've found the American company that at least makes the machines to manufacture the stuff. A New-Jersey-based company called Camatron combines CNC and pneumatic technology to modify industrial sewing machines for highly specific purposes. The results are like a wickedly cool descendant of Steampunk, where compressed air and electricity drive precisely-machined parts to perform pre-designed operations. As one example, check out this machine that's been modified to double-fold and stitch shut the ends of webbing straps at industrial speeds:

Once the straps' ends have been "sealed" thusly, to prevent fraying, they can then be incorporated into a larger design. Again we're not 100% sure the item being constructed in the video below is the actual IFAK bag, but it certainly has the MOLLE strap system and looks similar:

While a good deal of Camatron's videos show their machines designed to produce military gear, they also have clients in the civilian sector. Here we see a machine they've got jigged and rigged to bang out a specific seatbelt pattern:

Not sure what this odd stitch pattern is used for—perhaps parachuting gear?—but it looks cool as heck:

The company, based just outside of New York City, has been in business for over 40 years and maintains a Research and Design staff to stay on the cutting edge. And they build those fancy jigs you see on-site, in their own Hass-CNC-stocked machine shop.

When we talk about supporting U.S. manufacturing, I think it's companies like Camatron that point the way towards the future. The days of huge U.S. factories filled with thousands of production-line workers may be gone, but Camatron's intelligently-hacked machines can enable smaller, independent producers to achieve high output with low manpower. China will always have the bodies to out-manpower us, so I think the way that Camatron cleverly combines existing technologies to create new, better manufacturing machines, can help keep us competitive.