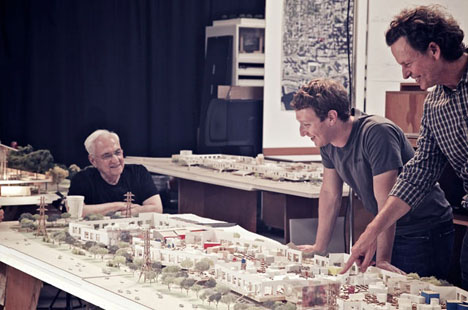 Facebook's stock might not be doing so hot, but that hasn't stopped founder Mark Zuckerberg from picking a big-name architect to design their headquarters expansion. Facebook West, as it's to be called, will be designed by Frank Gehry.

The space promises to be unusual: The plan calls for a ten-acre building—housing just one, massive, room. That's 420,000 square feet, spread over a single story. According the Bloomberg Businesweek, who got the scoop:

Gehry said skylights and clerestories in the 26-foot-high ceilings would shower the vast space with daylight.

...You would pass no private office or cubicle, but you could circle a glass-partitioned space at the very center of the floor where you might find Zuckerberg. Outdoor-terraced cafes will serve sushi and barbecue. A twisting wooden stair within a tall cube of glass will lead to a lush rooftop garden—a place to escape.

"Mark said he wanted to be in the same room with all his engineers," Gehry said. "I told him we could put the building up on stilts, park cars underneath and create a room as large as he wanted."

Sounds like a sideways skyscraper, doesn't it? But it makes sense that a horizontally-structured company would want a horizontal office.

Gehry's last quote in the article, by the way, isn't good news for blogs and magazines: "My goal is a kind of ephemeral connectivity that you can't take a picture of."

Ribbon-cutting is slated for Spring 2015.