Creative Talent and Sexual Attraction, Plus an Underwater Mystery 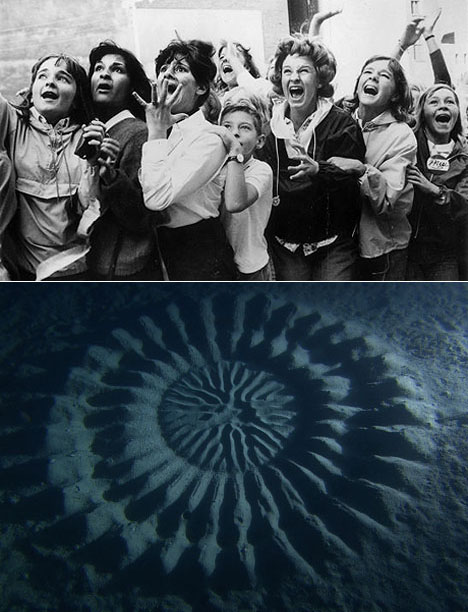 "Chicks dig rock stars" was the conclusion we high school boys drew early on. We'd all seen old TV footage of girls going nuts at Elvis and The Beatles concerts, and we couldn't help but notice that otherwise unremarkable guys we knew that were in local rock bands had no problem attracting mates.

The phenomenon of putting on creative displays that result in sexual attraction exists in the animal kingdom, of course; we all know about preening peacocks and strutting turkeys. But with animals it seems to run one way, with males being demonstrative to woo females.

With humans I think it runs in both directions. The reason we never said "Guys dig female rocks stars" was because none of my buddies and I followed female-fronted bands. But years later I was at Maxwell's—something like Hoboken's version of CBGB's—at an Asobi Seksu gig. When the diminutive, otherwise unremarkable female frontwoman hit the stage and started belting it out, I had a Wayne's World camera-zoom moment and understood the phenomenon at once. The singer can look like a mess, hair all wild, thrashing around and sweating through her T-shirt, but when she opens her mouth and that sound comes out, the rest of the room falls away.

I bring all this up because I've just seen the most astonishing example of a creative mating display ever—if it's real. The needle on my hoax meter is moving but I hope it's a false positive. Take a look at this: 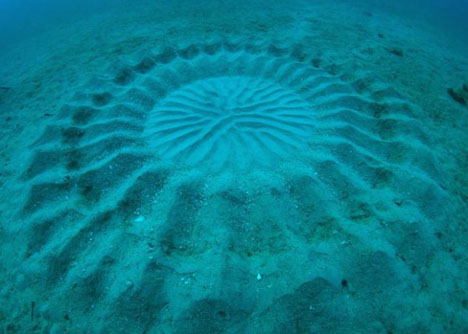 This underwater, sand-based version of a crop circle was spotted by underwater photographer Yoji Ookata in Kagoshima Prefecture, Japan, 80 feet below sea level. It's about 6.5 feet in diamater. Ookata had twenty years of diving experience and had never seen anything like it. And no one he showed the photos to knew what the hell it was.Japanese television company NHK became interested, and last week they aired their documentary-style investigation, "The Discovery of a Century: Deep Sea Mystery Circle." They set up underwater cameras. 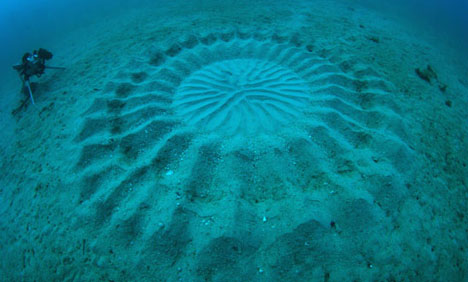 This is allegedly what they discovered:Underwater cameras showed that the artist was a small puffer fish who, using only his flapping fin, tirelessly worked day and night to carve the circular ridges. The unlikely artist - best known in Japan as a delicacy, albeit a potentially poisonous one - even takes small shells, cracks them, and lines the inner grooves of his sculpture as if decorating his piece. Further observation revealed that this "mysterious circle" was not just there to make the ocean floor look pretty. Attracted by the grooves and ridges, female puffer fish would find their way along the dark seabed to the male puffer fish where they would mate and lay eggs in the center of the circle. In fact, the scientists observed that the more ridges the circle contained, the more likely it was that the female would mate with the male. The little sea shells weren't just in vain either. The observers believe that they serve as vital nutrients to the eggs as they hatch, and to the newborns.

...What was fascinating was that the fish's sculpture played another role. Through experiments back at their lab, the scientists showed that the grooves and ridges of the sculpture helped neutralize currents, protecting the eggs from being tossed around and potentially exposing them to predators.

It was a true story of love, craftsmanship and the desire to pass on descendants.

Here's a shot of the fish doing the "carving:" 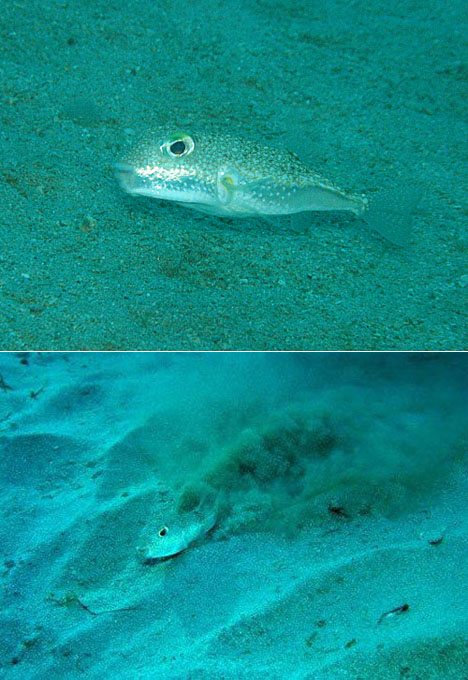 The skeptical part of me wonders how they knew exactly where to set the cameras up to capture this particular circle before it was carved. But perhaps they explain their process in the program, which I have not seen as it's unavailable in my neck of the woods.

Assuming it's all true, what's most fascinating to me is that the carving actually has a physical design function. That part I can comprehend. But I can't understand why guitar chords and vocal cords have the effects they do.

Here's a sticky question: For those of you dating or married to fellow creatives, what role does the level of their talent play in your attraction, if you can even quantify it?

Creative Talent and Sexual Attraction, Plus an Underwater Mystery