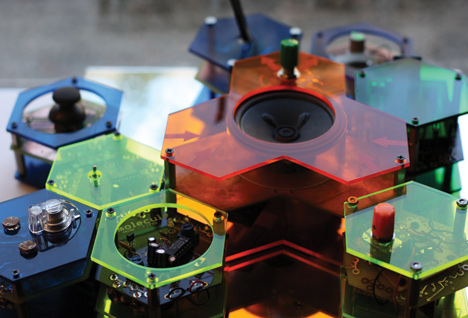 Travis Feldman's Molecule Synth was one of those Kickstarter projects that I discovered just a little too late in the game: the Portland, OR-based tinkerer reached his funding goal within two weeks and I bookmarked the 'buzzy' project for future coverage. Still, the charmingly lo-fi video made me feel guilty that I'd neglected my trusty Microkorg for years, piqued by the modular synthesizer kit that offers a hands-on experience for electronic musicians of all skill levels.

Lo and behold, Feldman's taking the show on the road to upcoming Maker Faire New York and I'm eager to see the it in person at the New York Hall of Science this weekend. Feldman will be in Zone B, and he's given us some exclusive insight into his design process and the future of the Molecule Synth in anticipation of the Faire.

Core77: I understand you are a scholar of Comparative Literature and Classics; how did the Molecule Synth come about? Conversely, does your background in humanities inform your approach to design?

Travis Feldman: My approach to design comes less from my background in humanities and more from being a geeky kid, making 'zines and comics, playing Dungeons & Dragons, skateboarding, hacker culture and Arduino tinkering. I've kept various art, programming and electronics going on almost nonstop since I can remember. My interest in music always seemed especially impractical, even when compared to something like translating ancient Greek texts, but they initially inspired me to pick up the soldering iron and begin making my own modified microphones, altered effects pedals, and, finally, my own homemade modular synth gear.

The Internet is teaching us all how to research and learn in new ways, and my understanding of electronics and my abilities to find out about everything that has gone into the Molecule Synth has depended a lot more upon the Internet than upon any traditional resources or formalized ways of learning. I might add that my attention to detail, patience to figure out unfamiliar things, interest in seeing the big picture in relation to "minute particulars," and intuition about what looks, feels and sounds "right" have been important for bringing the Molecule into existence, and those traits served me well in academic research projects. It's fair to say that the last few months have been busier than any other time of my life and challenged me to work harder than ever, but rather than think about how this could connect to academia, I keep coming back to the thrill of realizing that I am doing exactly what I want to do right now. 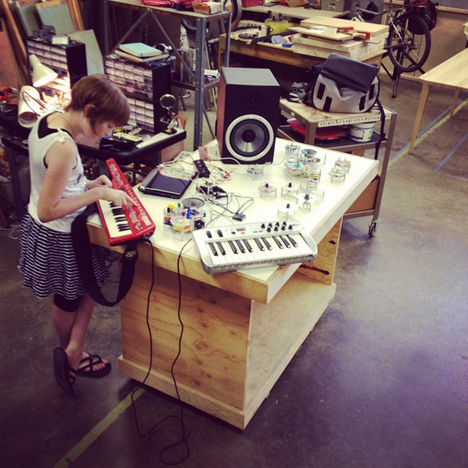 You note the "Lego-like interchangeability" of the Molecule Synth, but I also see some affinity to Sifteo cubes, with each element representing part of an analog synth patch bay. In other words, it appeals to novices and experts alike. What was the development process like?

Those Sifteo cubes are super cool! I can't afford them though and I've never actually played with them... I like the gaming component to them, too—I want the Molecule Synth to feel like a game of sorts. One important distinction between the concept behind the Molecule Synth and those cubes is my interest in hardware. Sifteos are software-based. I am reminded too of the design sensibility of the Reactable Synthesizer, have you seen that? It's also a software-based synth, with a brilliantly conceived set of cubes used to trigger and control it. I got to meet some of the designers and play with one recently while in Barcelona. But Legos are worth bringing back into comparison here, since the Molecule Synth is entirely hardware-based, snap-together circuitry, except for the Arduino-powered MIDI input.

My idea for the Molecule Synth came from experiences prototyping and experimenting. I spend a lot of time breadboarding synth circuits and then just listening to the results of swapping out one capacitor for another, or one type of controller for another. I thought I might be able to capture that in some device, and that idea led me to the Molecule Synth. I also like circuit bending, when you bring home a toy instrument from the thrift store, open up the back, and begin prodding and poking around the circuit board, seeking out that 555 timer circuit by rubbing a little slobber onto the resistors—that's tons of fun!—and I wanted to have some of that experimental chaos and closeness to the actual, physical circuits built into the Molecule Synth's design. 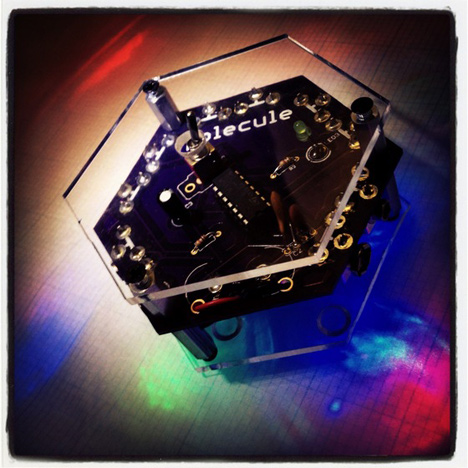 Well, those policies seem sensible for many reasons. I guess they must be coming from projects where slick graphics and hypothetical renderings were crucial aspects of convincing people to make donations for things the creators couldn't deliver, and, in particular, those policies are probably in response to a few bad cases, like the really horrible and ongoing lawsuit with the Hanfree iPad Accessory? I don't really know. But in making clear that "Kickstarter is not a store" it seems like they are signaling that the whole experience on both the creators and donors sides has to be understood differently. I hope that it is, for all of our sakes. It seems clear that Kickstarter will remain an important new instrument for crowdsource funding if they can figure out how to INCORPORATE the risks embraced in creative, genuinely innovative projects while protecting donors from the fakers and swindlers.

What does the future hold for the Molecule Synth? I imagine you have some ideas for expanding the MS ecosystem—any surprises in store for us at Maker Faire?

I am hoping to build up all of the Table of Elements into a system of modular synth components that can be ordered one at a time. This is what I plan to be doing during the early part of 2013. At the Maker Faire, I hope to have a couple of new hexes, possibly a Raspberry Pi-based Pure Data synth hex. We'll see what I can fit into my luggage! 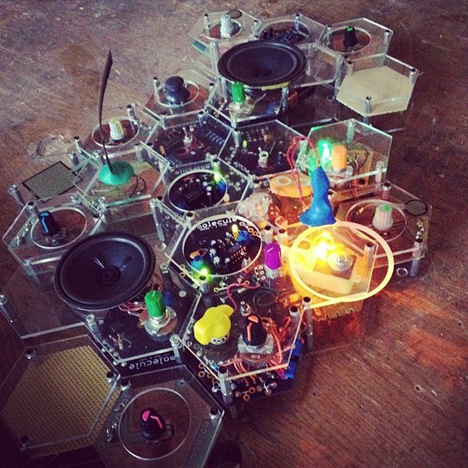 Maker Faire New York 2012 is happening this coming weekend, on Saturday, September 29 – Sunday, September 30, at the New York Hall of Science in Queens. Continue the conversation with Travis at his booth, take in some of the 500+ projects on view, and don't miss Saturday afternoon's panel discussion, "DIY and Design: How Makers Are Influencing Product Design," including Core77 Editor-in-Chief Allan Chochinov.

PLUS - We've got several free passes to giveaway: the first readers to let us know which maker(s) they're most excited about seeing this weekend will receive a pair of tickets to the event (be sure to include your full name and e-mail address when commenting!).