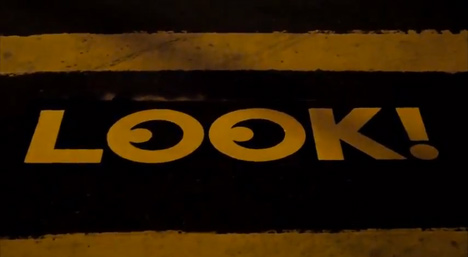 For cyclists in New York City, getting doored might be compared to missing one's stop when traveling via public transit: sooner or later, it happens. (As a year-round bike commuter, I have somehow eluded the dreaded obstruction, though I can't shake the feeling that my luck might run out someday.) One of my most memorable near-misses was a lucky break: I was riding behind a messenger-type who shoved an cab door back on a debarking passenger when the presumed one-percenter attempted to alight in our path between the idling taxi and the parked cars to our right. Dismayed, I think I mumbled apologies for the other rider's egregious behavior (on behalf of the rest of us cyclists) as I threaded the needle... but seeing as the entire episode happened in literally a split second, I can't say for certain. Still, I didn't dwell on the incident—we have close calls from time to time, and I'm pretty sure nobody lost any limbs in the encounter—no harm, no foul, just a little scare for an inattentive fare. 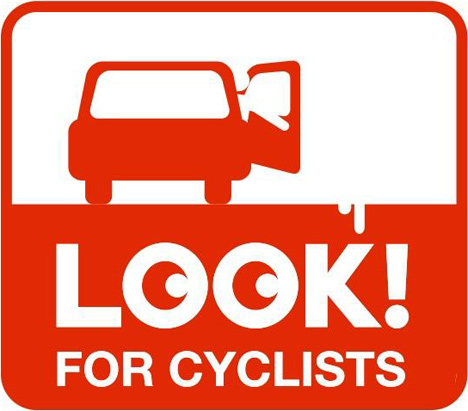 Which is why I was interested to learn that our friendly neighborhood Department of Transportation is doing something about it: a couple days ago, we retweeted this image of a sticker, coming soon to a taxi near you. While at least one commenter wondered why the cyclist was invisible, I interpreted the phantom rider as a visual metaphor for the fact that we are indeed an 'invisible' class of road-users. It turns out that we're both wrong: an errant image compressor all but erased the iconographic cyclist into the white background—an unintentional slow reveal to the Pentagram-designed graphic. 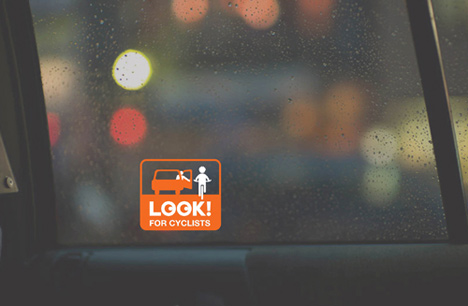 In any case, the NYC DOT (not to be outdone by California) announced the campaign—featuring "new eye-catching decals affixed to taxi passenger windows and a new Taxi TV video"—earlier this week:Starting today, 26,000 eye-catching, orange-and-white window stickers reading "LOOK! For Cyclists" will be available to the city's 13,000 yellow-taxi fleet, which provide some 200 million rides citywide a year. The video calls on New Yorkers to "Take out their boss/Take out a date/But don't take out a cyclist' and will air on video units in every yellow taxi cab on Taxi TV, the dedicated network in cabs, through NYC Media and will also air on the City's NYC life channel. This campaign extends the campaign kicked off last week with U.S. Transportation Secretary Ray LaHood that is bringing "LOOK!" street markings to 200 high-crash crosswalks citywide and a concurrent ad campaign, and they are the latest in the City's ongoing efforts to make New York City's streets safer for everyone. 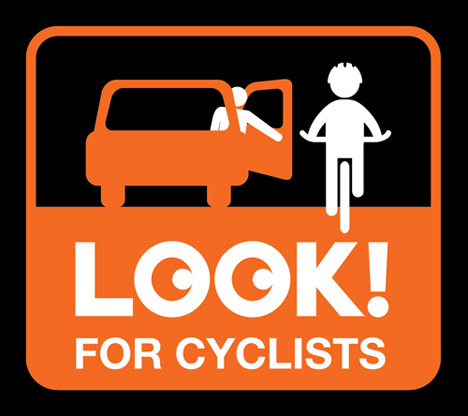 Frankly, I'd like to see the graphic plastered in large scale on the exterior of taxi doors as well: I've inadvertently sideswiped a singleminded jaywalker—surely late for a meeting with President Obama—on a couple occasions, when the intrepid perambulator saw the bumper-to-bumper autombiles as a green light instead of heeding other vehicles traveling at speed, bounding into my path to the effect that we both looked like assholes (again, no one was injured in the making of this blogpost). Instead we're stuck with this.

Taxi TV (which loops on screens in NYC cabs) may have a captive audience, but it's got nothing on YouTube's recommendation engine, which referred me to this so-called 'Related Video' in which a DOT worker is laying down the actual decal on the street. I suppose I could have guessed, but I'd never considered that the markings on asphalt are heat applications.
Gotta love that title screen!

Here's a longer, arguably less interesting video of the torching process—hey, we didn't promise a street cleaner waltz (might want to check the volume before you hit play):

While the good old-fashioned blowtorch has the mesmerizing appeal of a controlled flame, a company called Graco makes heavy-duty stripers and the like. The first half of the video is a silent CG animation of the machines and their specs, as well as a demo of potential applications (starting at 2:18 or so), but I've embedded it when the going gets good:

Lastly, the material wizards at 3M have developed an asphalt adhesive called "Stamark," their own temporary road markings:

What does this have to do with a citywide cycling awareness campaign? Not much, really... but let's just say that if Sebastian Errazuriz had been serious about "Wall Street Nation," he could have gone with Stamark (guerilla bike lane crusaders take note).

Helmet-tip to Prolly and Quirky; more on Streetsblog