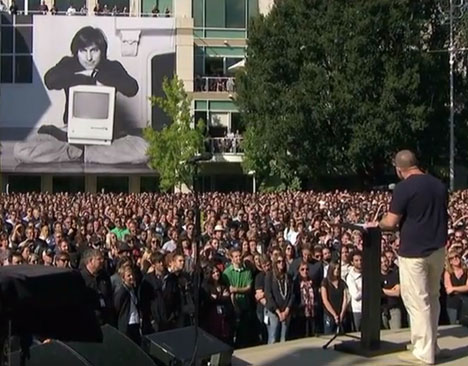 As we approach the anniversary of Steve Jobs' passing (this Friday), we're seeing Mac blogs light up with a variety of anecdotes about Jobs and his accomplishments. Hands down, the best we've seen is Jonathan Ive's moving speech, below, delivered to Apple employees on the Cupertino campus in a private ceremony from last October.

While Ive touches on some well-known predilections of Jobs' (toiling over parts of an object that no one would ever see, or his father's "back of the cabinet" philosophy, for those that read Walter Isaacson's book), he also sprinkles his talk with humorous gems like the funny hotel story he tells at 2:30. And there are enough design-specific pull-quotes in Ive's talk—on the power of ideas, on the importance of trying, failing, and persevering, on the human cost of design—that it would be impossible to select which was my favorite. You definitely ought hear it with your own ears.