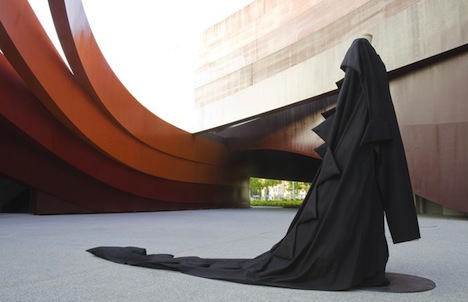 Yohji Yamamoto in the Courtyard of the Design Museum Holon

Following our trip to Tel Aviv to cover Holon Design Week earlier this year, Design Museum Holon (DMH) mounted Yohji Yamamoto's first solo exhibition in Israel, a site-specific installation that was something of a ground breaker for the museum, which had never before turned itself over entirely to a single artist or designer. The stunning exhibition, which reflects all the ambition and energy of the museum's inimitable chief curator Galit Gaon, will be sent off in style this week during the Holon Fashion Week.

As all cultural events in Holon and Tel Aviv tend to revolve around the architecturally significant museum designed by Ron Arad in 2010, the theme of this year's Holon Fashion Week is, fittingly, "On Clothes and Cities," and will focus on Yamamoto's influence on contemporary Israeli culture as well as the relationship between "fashion, architecture and the modern urban challenge." 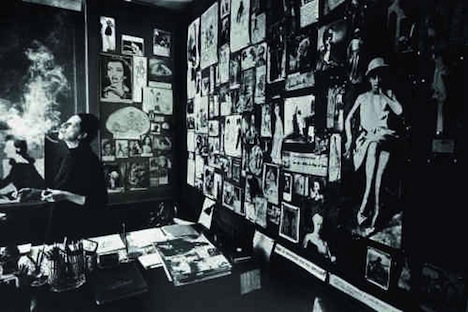 From October 15 - 20, DMH will host a pop-up shop, collaborative projects between architects and fashion designers, presentations by Rafael de Cardenas, architect and former fashion designer at Calvin Klein, Ippoliti Pestellini Laparelli, an associate at Rem Koolhaas' OMA in charge of their projects for Prada, Shala Monroque, fashion consultant for Miu Miu and Prada, and Corso Como's Carla Sozzani. Film screenings are scheduled for the well reviewed documentary Diana Vreeland: The Eye Has To Travel, about the legendary fashion editor of Vogue and Harpers Bazaar and Versaille '73: An American Revolution, a documentary about the legendary 1973 event that pitted "the five lions of French couture Givenchy, Dior, Ungaro, Yves Saint Laurent and Pierre Cardin with five American designers Halston, Oscar de la Renta, Anne Klein, Stephen Burrows and Bill Blass." See the full schedule and list of speakers and follow the happenings on Facebook.