Tonight at the Curiosity Club: "Whole Hog Butchery" with Rob Roy the Butcher and Charcutier for Nostrana 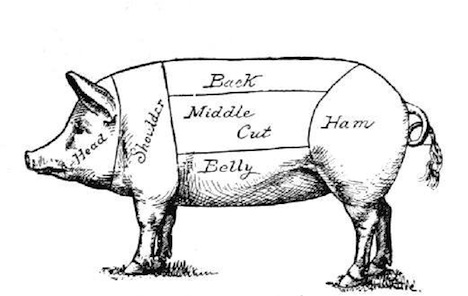 Join us Tonight at the Hand-Eye Supply Curiosity Club in lovely downtown Portland, Oregon as Rob Roy, the Butcher and Charcutier at Nostrana breaks down a hog from nose to tail to trotters.

As a Butcher in Portland Rob Roy revels in the ability to visit the farms where the animals are raised, to witness the growing of nourishing foods, and to advocate for local farmers. He works to create an important connection between the farmers and the patrons of the restaurant by responsibly butchering the animals we consume. 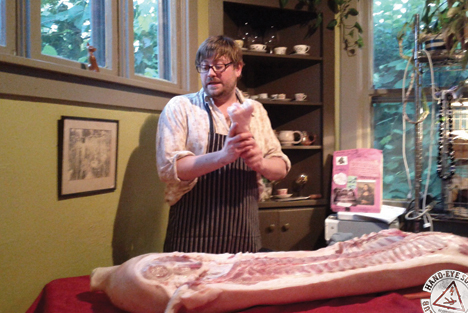 Rob will be butchering a hog and discussing why it is beneficial for the farmer and the consumer to buy and use the whole animal from nose to tail. You will learn where different cuts of pork come from, how to break them down, and how to prepare them for the table. What part of the hog needs to be eaten first, what should be brined, cured, frozen, made into sausage? He will talk about curing ham, pancetta, guanciale, lardo, making of delicious charcuterie, and more on food preservation. Rob will inform you on the benefits of lard and bone stock and the many ways to cook up a pig head. He will hand out recipes so you can have a breakdown party yourself, then feed your family for months. Come learn how all the parts fit together and how to be responsible with the whole thing.Rob Roy is the Butcher and Charcutier at Nostrana Restaurant in Southeast Portland Oregon. From the trotters to the cheeks he respects every part of the animal while transforming them into delicious edibles. Rob has been working at Nostrana for over four years developing relationships with local farmers and dedicating his work to utilizing their whole animals. Rob studied art and language in Florence Italy and was instantly immersed in Italian cuisine. He treasured the quality of ingredients, the importance of local agriculture, and the 'food-glorifying' style of Italian cooking. After returning he sought out artistic culinary adventures that resonated with these ideals of food sourcing and cooking. He graciously contributed to some of Portland's best traditional Italian restaurants, Assaggio, Genoa, and Nostrana, where his dream position has come to fruition.

Note: After the Curiosity Club Rob Roy will be making parts of the "Whole Hog" available for sale. Bring large ziplock bags and coolers if you'd like to take some home with you.

Additional Note: Due to the nature of this talk the total running time will be approximately 2.5 hours.

Not in the greater Portland area? No problem! Join us live on our broadcast channel --the show begins at 6pm Pacific.

Tonight at the Curiosity Club: "Whole Hog Butchery" with Rob Roy the Butcher and Charcutier for Nostrana