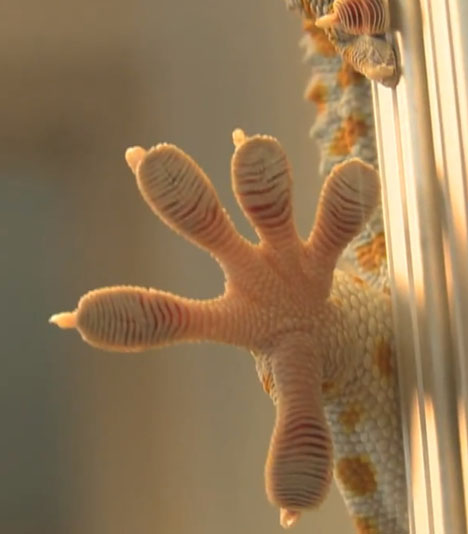 More than five years ago we first wrote about Geckel, a biomimetic adhesive based on geckos' and mussels' ability to stick to things. But as of this year the material was still "under development."

Perhaps Duncan Irschick and Alfred Crosby, from UMass Amherst, will have better luck. The pair of scientists--one from Biology, the other from Polymer Science & Engineering--have devised "Geckskin," a reusable tape that can reportedly stick something weighing 700 pounds to a flat wall. Manufacturers of wall mounts for flatscreen TVs ought to be worried.

Like Geckel, Geckskin is based on the millions of fine hairs on a Gecko's skin. 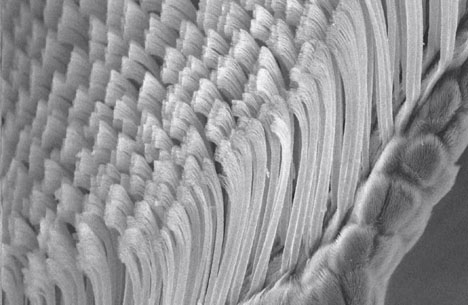 Those tiny hairs form attractions to surfaces on a molecular level, creating strong bonds. But that doesn't mean it's sticky, like conventional tape is:Geckos easily disengage their grip without leaving any residue on a surface, a highly sought-after quality that the polymer scientists on the team were able to retain in Geckskin. Guided by new understanding of interacting elements including tendons, bones and skin in the gecko foot, they made an integrated adhesive with a soft pad woven into a stiff fabric, Crosby explains, which allows the pad to "drape" over a surface, maximizing contact. Geckskin uses inexpensive materials such as polydimethylsiloxane woven into a synthetic tendon that maintains stiffness and rotational freedom.

Geckskin's combination of bearing heavy loads and being reusable/reversible in dry (not sticky) adhesion offers rich possibilities for new applications such in everyday life as well as in medicine and industry.

The key innovation was to create an integrated adhesive with a soft pad woven into a stiff fabric, which allows the pad to "drape" over a surface to maximize contact. Further, as in natural gecko feet, the skin is woven into a synthetic "tendon," yielding a design that plays a key role in maintaining stiffness and rotational freedom, the researchers explain.

The stuff looks pretty awesome, and we sure like the "inexpensive materials" part. But as we've learned from Geckel's failure to launch, the question now is: Can Irschick and Crosby get Geckskin to market?