The Hubless Pizza Wheel Is a Real Thing

Every now and again, we see a concept bike that incorporates a hubless wheel, typically a bicycle, which is invariably met with backlash such as: "the hubless wheel is a hallmark of naïvety." Yet idealistic designers continue to pursue the void—hell, we've even seen a prototype of a bicycle with a hubless wheel—and there's no denying that it's a striking form factor. It seems that the judges of the Red Dot Award concur, noting that the hubless wheel "captivates due to its exceptional ergonomics." 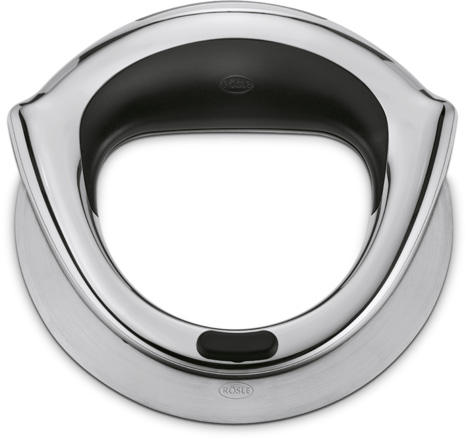 Of course, they're not referring to a vehicle but a rather more mundane (or, conversely, practical) object: the Rösle Pizza Wheel.Thanks to the innovative, patent construction with a rounded, free-running blade, the pizza wheel glides quickly through the fresh pizza, without causing the topping[s] to displace. The stable, stainless steel blade is sharpened on both sides and assures exact and effortless work. The pizza wheel can be easily dismantled for cleaning. 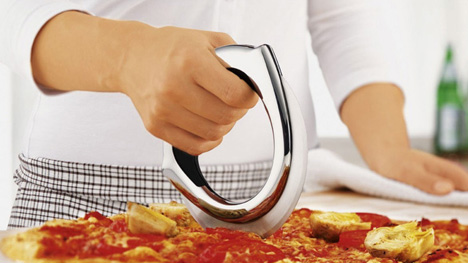 The Pizza Wheel turned up in our forums (in a thread about "Good design you love to have," no less) where member mo-i notes that a pair of Americans—Jessica Moreland & Chris Hawker of Trident Design—came up with the design for the German kitchenware company. Although the hubless blade goes by a different moniker on the Columbus, OH-based consultancy's website, it didn't require much digging to learn more about the Pitzo: Moreland and Hawker are duly proud of the recognition they've received, and the backstory is available on the microsite:The Pitzo Pizza Cutter was conceived in 2009 by Jessica Moreland, an industrial designer working at Trident Design, LLC, a product design and invention development lab... While on a scouting trip to Bed, Bath and Beyond with Chris Hawker, president of Trident, it was noted that the pizza cutter was a product that could use some fresh eyes. 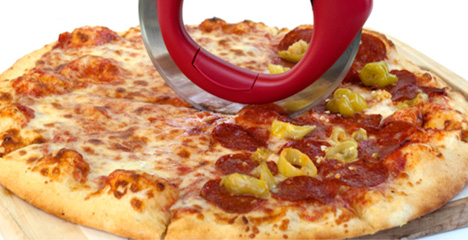 The plastic version is available at Walmart, among other retailers 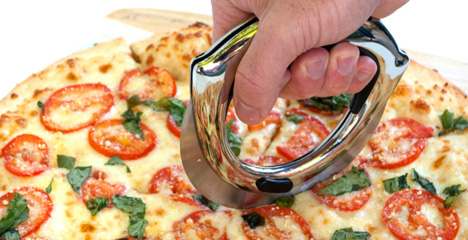 A few days later, Jessica showed up at work excited, anxious to show off something she'd thought of. Out of her bag came a drawing that was the genesis of the Pitzo design: a hubless blade pizza cutter. She explained the benefits it would provide: improved downward force due to the lack of a stick handle, a better grip, and a way cool look. Countless concept cars and bikes feature hubless (spokeless, really) wheel designs, but in these applications they are really just eye-catching gimmicks, and totally impractical for production. Therefore, they never make it to market. Here was an opportunity to bring this cool aesthetic into reality, and with plenty of functional justification. Hawker was immediately sold and agreed to put the resources of the company behind her concept and help her license it. 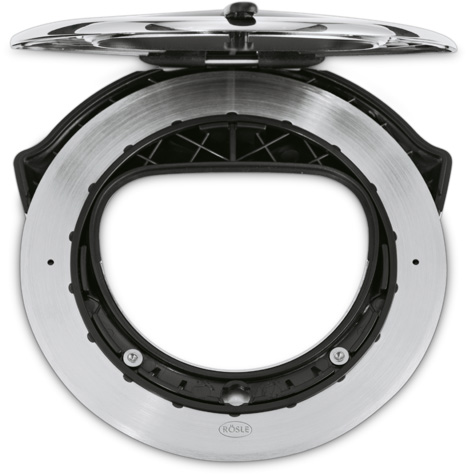 An outline of the design process follows; while forum moderator (and sometime Core contributor) Ray Jepson wonders "how the blade moves smoothly without seeming to have bearings," Trident notes that "the greatest challenge was achieving a balance among the height of the blade, the diameter of the blade, the size of the handle opening, and the overall dimension."

Once they perfected the design itself, they proceeded to create the branding and identity, including the video above, as well as filing a utility patent for the innovative design. I was interested to learn that Trident opted to license it to two manufacturers:At the beginning of the licensing process, [we] asked: what would be the best possible outcome, even if it was unlikely? The answer [was to pursue] two licenses: one that was high-end, and likely European, and one that focused on a lower-cost model for the broader (and much bigger) market. This was an unusual arrangement and it is difficult to get companies to agree to share, but the decision was made to take the risk of alienating a potential partner by pushing for it and focusing on enlightened companies.

It took some clever negotiating, but amazingly, the ideal partner that was approached for each role agreed! The key was explaining to each that the other was not their competitor (due to pricing differences) and that innovation loves company: i.e. the attention one gets would help the other. The high-end partner, Rösle is a 100+ year old company based in Bavaria, Germany that is known for making the highest-end stainless steel kitchen gadgets in the world. The mass-appeal partner, Lifetime Brands, is the largest manufacturer of kitchen gadgets in the world, selling under 32 brands including Farberware, Pedrini, Kitchenaid and many more. The Pitzo was going to be made real by the biggest AND the best in the world. 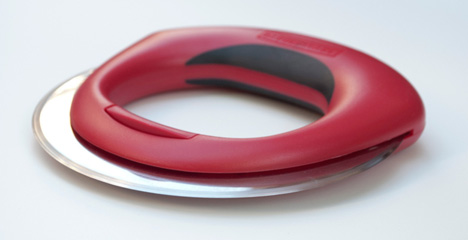 All else equal, the fact that the Pizza Wheel resembles a futuristic weapon might be considered as the hallmark of its cool factor, giving it a huge competitive advantage over, say, the infamous Pizza Scissors.

The Hubless Pizza Wheel Is a Real Thing