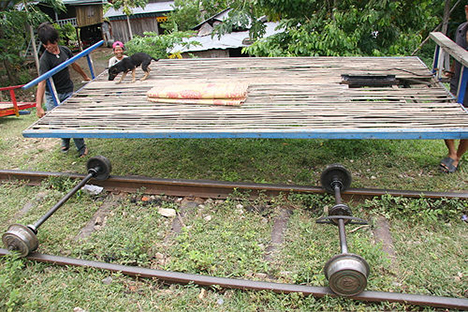 Cambodia has one railway line, laid down by the French during their colonial occupation. The antiquated tracks are no longer safe for trains to run on, and as a result, there aren't any.

The locals, however, aren't about to let a potentially useful piece of infrastructure go to waste. In the area near the western Cambodian towns of Battambang and Poipet, the locals produce what are known as norry: Lightweight, powered railcars built from a wooden frame, bamboo slats, and steel wheels from decommissioned tanks. Two men can get the thing on or off the tracks in less than a minute. 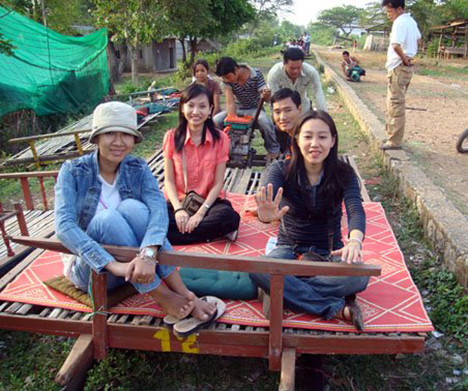 Norry were initially powered by poles, like earthbound gondolas, but eventually some locals got their hands on a two-stroke engine and figured out how to drive the axle via belt. 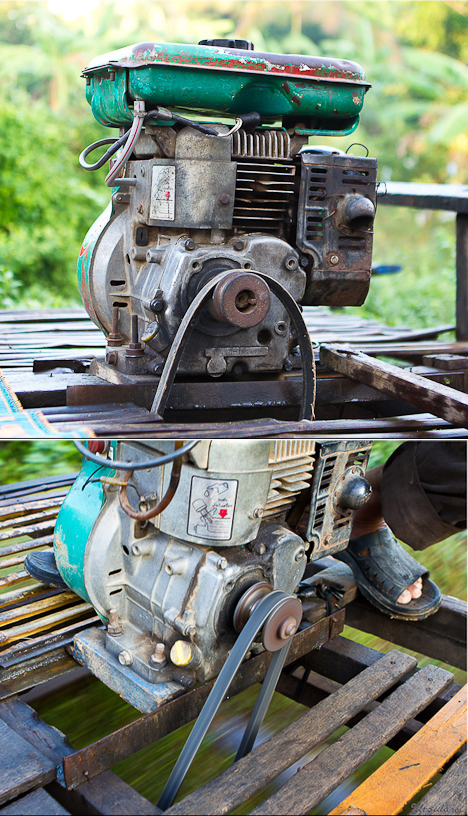 By using a stick to increase or decrease tension on the belt, the "engineer" can induce belt slippage as a rudimentary form of throttle control. Braking is provided via a foot pedal that contacts one of the wheels through the platform, using raw friction. The motors caught on and the pole-drive has gone by the wayside.

Here's a look at a norry being assembled and going into action:

What's most impressive, at least to an American like me used to witnessing self-entitled U.S. motorists and passive-aggressive elbow-armrest-wrestling on airplanes, is the etiquette system worked out for when one norry meets another, head-to-head. The railway is a single line, and when two norry encounter each other going in opposite directions, right-of-way is dictated by weight/convenience. Whichever car has less people simply break the contraption down and pull it off the tracks to let the other pass. Cars with more people, or those carrying a motorbike, which is relatively heavy, get to kick back. Check it out, and peep how easy the thing is to break down (action starts around 1:50):