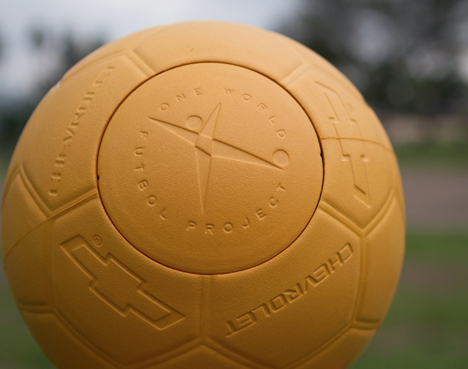 Tim Jahnigen is a multicreative, Dean-Kamen-like inventor who has created "systems and technologies with patents pending in a diverse range of industries, from construction and banking to science and medicine." In recent years he turned his attention towards what initially appeared to be a smaller problem: Redesigning the soccer ball.

During the last World Cup we looked at the soccer ball's design history, and complained about the pure evil that is the Jabulani. But Jahnigen was interested specifically in soccer balls as they're used in developing nations. Your average Adidas will last just fine in the back of a minivan or on the well-manicured pitch at Springfield Middle School, but dirt tracks in Darfur and rocky fields in Afghanistan chew the balls up in no time. 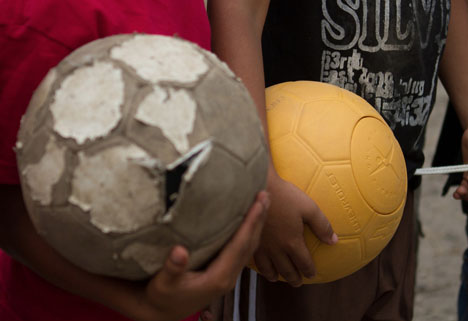 So it was that Jahnigen observed a documentary about kids in Darfur kicking around, rather than a ball, a rough sphere of garbage tied up with twine. It was their only option, as balls donated to children in situations like these simply cannot withstand the rough terrain. "The millions of balls that are donated go flat within 24 hours," Jahnigen told The New York Times.

After doing research he discovered a materials company called PopFoam, whose tagline is "Soft Toughness" and whose titular product is made from EVA (ethyl vinyl acetate). As the company describes it, "PopFoam will improve durability, tear strength, tensile strength, flexibility, color availability, chemical resistance, cold weather resistance, sound protection and abrasion resistance while offering the cushioning comforts and the complement of design ascetics [sic] to your products."

However, Jahnigen calculated that tooling costs to produce PopFoam in a spherical, soccer-ball-sized shape would cost a small fortune--about $300,000, money that he didn't have. Here's where it gets a little crazy: The multi-talented Jahnigen is also a music producer, and counts Sting among his list of buddies. When Sting, no stranger to charitable giving, heard about the project, he insisted on funding it.

The resultant One World Futbol has some impressive characteristics:

Virtually-Indestructible. Unlike any inflatable ball on the market, the One World Futbol never needs a pump and never goes flat, even if punctured. The ball is made using state-of-the-art technology that requires no stitching and is designed to have the same rebound characteristics as a traditional soccer ball. It's the same size and weight as a standard soccer ball, but it can also be used for netball, volleyball, and many other games.

All-terrain. The One World Futbol is ideal for any playing surface, not just grass or regulation soccer fields: indoors, on concrete, on blacktop, on grass, on a beach, on dirt, or even on a rocky field. The ball can withstand the harshest conditions without deflating.

Sustainability. The ultra-durability of the One World Futbol also helps meet a significant environmental challenge by eliminating the waste of discarded, punctured soccer balls. In Africa alone, 20 million deflated balls make their way into trash heaps every year.

Buy One, Give One. For every One World Futbol you buy through our "Buy One, Give One" program, we give a second ball to children and youth in need through organizations working in disadvantaged communities such as refugee camps, war zones, disaster area and inner cities.

No Child Labor. Many traditional soccer balls are still stitched together by hand by children and adults working under deplorable conditions in Pakistan, China, and India. The One World Futbol is manufactured using state-of-the-art technology that does not require stitching. 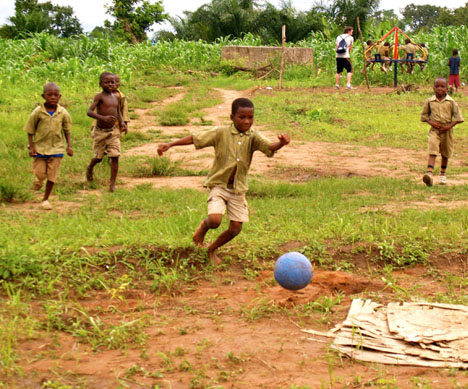 The tooling costs ended up being far less than estimated, and the ball is currently in production. But Jahnigen is still hoping to lower the production costs further: Even at the reduced charity rate of $17 a pop, the ball is still expensive for charitable organizations to procure en masse.

Thankfully, another company stepped up to join Sting and Jahnigen. Chevrolet has agreed to pay for 1.5 million balls to be donated around the world.

Western consumers can purchase a ball here for $39.50, which really counts for two balls—one goes to you, one to a community in need. You can also forego the ball for yourself and spend $25 to have one donated.