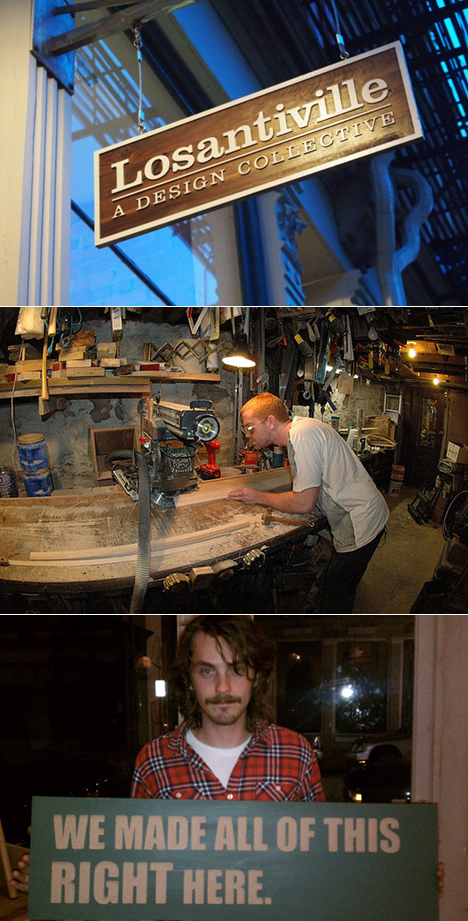 Traditionally, one of the challenges faced by creative communities in a Toronto or a Cincinnati has been brain drain: Talented designers are lured away by bigger cities like New York and San Francisco, leaving their hometowns in the dust. While that's been good for the big cities, it's lousy for the small cities in that the local citizens are deprived of a potentially helpful exposure to design.

Nowadays that's starting to change. Cincinnati native John Dixon received his degree in Industrial Design at the University of Cincinnati's College of Design, Architecture, Art and Planning, then picked up stakes and headed to Brooklyn for a furniture design internship. While he was there he learned a ton, and rather than stick around like most starry-eyed NYC newcomers, he decided to bring what he'd learned back to Ohio with him.

He wasn't alone. While schools like DAAP do a good job of deploying students around the globe for internships, a bunch of them found themselves back in Cincinnati. As fellow ID grad Mike Nauman told a local paper, "We all saw what was going on in the world," Nauman said. "We all fell out of love with industrial design."

So three years ago a core of them formed a Cincinnati-based industrial design collective, Losantiville LTD., to fall back in love with design. And this time it would be on their own terms.

At Losantiville, they would pool their resources and rent a storefront. They would share a space and tools. They would build what they wanted and how they wanted. They would succeed or fail on their own merits. They hung a sign in the front that says proudly: "We made all of this right here."

...It works because industrial designers do not need a lot of individual space, but they do occasionally need expensive tools. "This works for a person only if you are actually making things," Nauman said. "Only if you are making dust."

Each member pays $175 per month, which covers rent and utilities and dumpster pick ups -- this is a group that makes a lot of garbage. Each month, the left over money is saved for large group purchases. The biggest one so far: a laser cutter called a CNC machine, which stands for "computer numerical control" and cost $10,000. The machine is quite useful, but it also had symbolic significance. The ability to buy a machine like this, meant they had made it. They were serious.

Sounds awesome, no? I don't know what the rent looks like in Cincinnati, but it's gotta be a damn sight better than what you pay in NYC or SF.

As it stands, Losantiville consists of nine designers spread over six brands, all DAAP ID grads, and currently all dudes. They've got a shop, they've got a storefront, and you can peruse their wares here.

Here's a vid showing what they do: