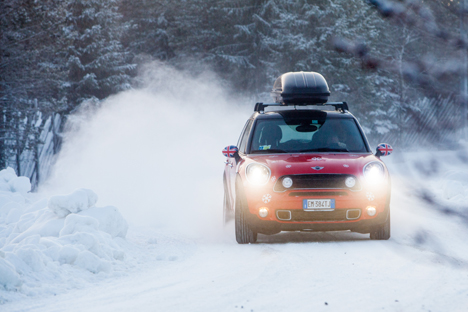 The weather in the Arctic was, as you can imagine, freezing cold. I'd been to the Arctic once before, in Sweden, and they had a saying there: "There is no bad weather—only bad clothes."

Perhaps MINI should adopt the phrase "There are no bad roads—only bad cars." Which is to say, the driving conditions in Rovaniemi were not pleasant—roads were covered in snow, ice, or a mixture of both—and to prove their cars could handle it, they set us journalists loose on twisty, slippery test tracks with their cars. (These were not actual tracks, but car-width areas of directionality through the wilderness, demarcated by cones and featuring plenty of curves.) 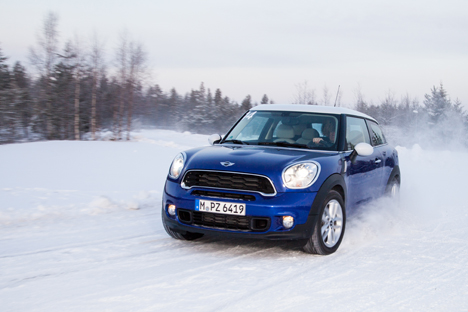 Rauno Aaltonen was on hand to check that our physical driving positions matched rally standards; as one example, I found that the particular seatback angle I've been using for years is off by a couple of inches. Here's the check Aaltonen taught us: Put your hands at nine and three on the wheel. Now move your left hand across the wheel and grasp three o'clock, with your thumb down, as if you've just turned the wheel in that direction. At this point the back of your left shoulder should still be firmly pressed against the seat. "The seat must give you support when you take a hard corner," Aaltonen explained.

After that it was off to the races. A little personal background: I'm no rally driver, but learned to drive on a five-speed stickshift with rear-wheel drive and no anti-lock brakes. For a couple years I also had to drive through extremely heavy snow, sometimes for up to 10 hours, to get to my first college. So I'm no stranger to stickshifts and adverse weather, and I'd accidentally put my car (and a front-wheel drive car I later owned) sideways on icy highways more than once.

I've never been eager to repeat those experiences, and my first instinct while driving in inclement weather is caution. But after one stultifyingly calm lap on the snow track in the All-4 Mini, which handled as if the car was on regular pavement, caution got boring. So I started pushing the car faster and harder. Then it got fun: When you put your foot down and whip it into a corner, the car feels well-balanced and only lets the tail out with predictability; it practically tells you, in a British accent, when to countersteer.

I'm not talented enough to sustain a drift all the way through a hairpin, but I damn sure tried. On the snow and ice track it was easy to force wheel slippage, but very difficult to upset the car, and it was of course impossible to lock the wheels up. I have no experience with British cars, but the stickshift felt positively German. 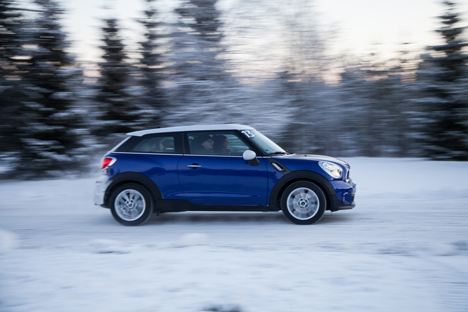 On my final laps, where the tracks featured patches of field with no trees to wrap the car around, I actively tried to put the car off the road by emulating poor driving (without outright driving like a jackass, i.e. steering directly off the road). I couldn't. If you have a modicum of self-preservation, I'd say you'd have no problem piloting an All-4 through the worst winter conditions.

It was also freaking freezing out, about -20° Celsius, so I enjoyed both 1) the heated seats, and 2) the fact that the driver's side dashboard blowers can be perfectly positioned to blow hot air on your hands at nine and three on the steering wheel.

The hardcore automotive journalists I was switching off with were considerably more jaded; I met one guy who goes on 120 car-based press trips a year and owns a Land Rover Defender, so to him, this was an ordinary experience. But for a regular Joe like me, getting to drive that car in those conditions was an eye-opening treat.

Surprisingly, after I'd driven the 4-door Countryman and the sportier 2-door Paceman, this civilian was on the same page with Rauno Aaltonen as to which I preferred: The former, for an ergonomic reason. "With the Coupe, after entering the car you must reach back for the seatbelt," said Rauno, miming the turnaround action required to grab the belt, placed further back on the two-door car. "With the Countryman, it is right there." He reached over his left shoulder without moving his head.

Unsurprisingly, Rauno beat the pants off of my track time.