As we look to 2013, it's a common practice amongst designers to think about the future of design. The future, indeed, is quite exciting, with 3D printing, open data, green innovation, automated cars and a slew of other new technologies and systems opening the doors for designers to play and create. But as we think about the future of design, I've also noticed that 2012 has seen the past creep in to designer's works in creative ways.

This year, I've written about a few projects involving design nostalgia. There were Evan Roth's popular Solitaire.exe playing cards, an analog throwback to the popular digital game and pre-social media time waster itself inspired by analog playing cards. Kyle Bean put together a set of nesting dolls of mobile phones, shrinking ever forward from the infamous DynaTAC, once a status symbol amongst the wealthy elite and now a laughable relic of the past. Each layer we uncover brings us closer to a future of mobile phone ubiquity while reminding us of the past technologies of their birth.

And looking even further into the past is the iTypewriter, Alan Yang's wacky mash-up of a physical typewriter with an iPad, which inspired a look at other nostalgic devices developed for iOS devices, which still feel futuristic, from an Atari joystick to the 1984 Mac OS GUI on a Macbook. That particular post prompted a variety of comments: reader C3 bashed it all as "hipster design... cute / fun / fluff pr / etc," while Renato Castilho offered a longer critique:

While the concept seems to have been carefully crafted, the very way it takes a forward-looking mobile device (which fits in an envelop [sic]) and makes it bulky, loud and cumbersome should be enough of a reason to shelf it [sic]—let alone the fact that it is by design less useable than the iPad screen or a regular Bluetooth keyboard...

It is certainly amusing, interesting, nostalgic but I can't really take it seriously. The amount of energy, thinking and effort put into making the new feel (or worse work) like the old could be better applied but hey, at least it assumes, unlike Microsoft's Surface, that a physical keyboard belongs on a table.

Most revealing is the reflexive nature of many of these projects. Take Walden Wegrzyn's Electrkobiblioteka, a physical version of an e-book with real paper pages that you can flip and touch. It's a book of an e-book of a book? And then there's Jeff Skierka's Mixtape Table, a throwback to eras when cassette tapes and plywood tables were trés chic. And if music isn't your thing, you can always turn to Neulant van Exel's Floppy Table, complete with a sliding compartment a la the classic metal shutter. And what does van Exel suggest we place inside? A remote control for a television, of course.

And perhaps because of their mix of futuristic design with populist appeal, Apple products continue to be a prime target for design nostalgia. After all, with more processing power in our phones than the computers used for the first Moon landing, what do we do? We take pictures, of course. And share them. So consider the Impossible Project's Instant Lab, a Kickstarter project to bring the Polaroid back to life through the iPhone. Moreover, if iPhone cases inspired by previous Apple designs isn't nostalgic enough for you, consider the origin of Apple's curious command key, designed by Susan Kare: a castle seen from above, an pictograph used by Swedish campgrounds to mark a popular tourism destination. 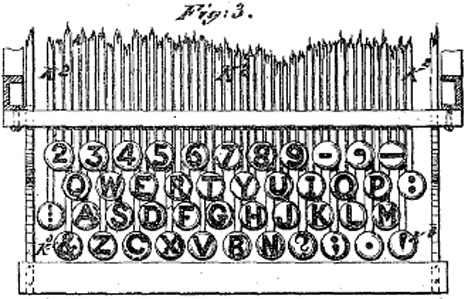 Back and back we go in design, even as our technologies march forward. It makes sense: design inspiration is everywhere, and often it comes from the past. The iTypewriter, while initially appearing silly, only makes sense because the basic keyboard format—down to the fact that we can still type out "TYPEWRITER" in the top row of the iPad keyboard—is derived directly from the typewriter. It's a layout that is used globally, even when it no longer makes sense to do so, such as in countries that don't use the Roman alphabet to begin with.

It's not always a useful practice, I think. A lively discussion on Core77's comment boards as far back as two years ago offered a spectrum of perspectives. On the one hand, throwbacks to previous designs, a practice known as skeuomorphism, can indeed be a bridge to a new and unfamiliar technology; imagine trying to learn how to use an iPad and having to learn the DVORAK keyboard layout. But on the other hand, these vestigial design strategies probably need to be discarded at some point. Writing in The Verge, Paul Miller kind of nailed it:

But it's not just functionality, there's something deeper that bugs me, about the decorations themselves. Like the ubiquitous drop shadow. "Did you know that this window is on top of this window?" it whispers to me, endlessly. Apple's love of reflections and faux 3D subtly imply to me that I might be lost, needing landmarks and a sense of place to find my way. Microsoft's oddly-sized minimize / maximize / close buttons in Windows 7 are only there to help, but they also hint at some lack of eye-hand coordination on my part. Soft edges, endless gradients, and rounded corners seem designed to keep me from hurting myself on an acute angle, as if the desktop is a choke-proof toy for babies, instead of a sharpened pencil. A huge graphical icon representing an app might look incredible and enticing, but after a while it's sort of oversharing. It's constantly reintroducing itself, in case I didn't catch its name the first time.

Core77's own hipstomp had his own thoughts, as he waxed optimistically about Jonathan Ive's takeover of Apple's human interface group:

Yes, I'm biased; I think skeuomorphism sucks. It doesn't add anything to my experience to have the Notes app look like a legal pad, or to have the top of my Calendar app look like it's made out of desk-ledger leather. And the Address Book software is terrible; it's made to look like a book, yet doesn't work like one—there's no easy way to flip pages from the All Contacts view.

These are all valid points, and I can't help but agree. I've been using computers for decades now; I don't need them to resemble my physical desktop anymore. While skeuomorphism sometimes has its place, it's often mired in an unnecessary past, rather than open to a expansive future.

But that's not what I'm looking at here.

If skeuomorphic design reflects the practical failures of design mired in the past, what I'm interested in is the emotional delights of deliberately designing for a rememberd past. I choose to call this phenomenon design nostalgia, rather than retro design. Nostalgia doesn't have a functional purpose, but it does have an emotional one. There's a certain joy at looking back while looking forward, the same way a momentous moment like graduation from design school might prompt us to look back at the challenging but mind-expanding assignments and projects that got us there.

And comfort, too. As we march toward the Great Unknown of our technological future, it's nice to look back at the familiar, take a deep breath, smile, and keep on marching.