Via Motors: The Environmentally-Friendly Answer to America's Truck Woes? 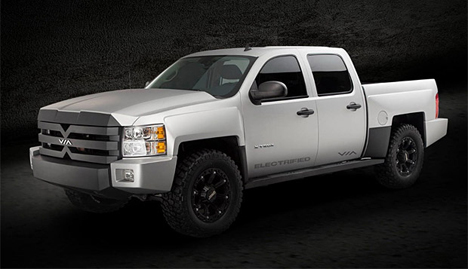 There are people who want to own a truck, and people who need to own a truck. I'm of the opinion that you can get rid of the former, but not the latter; while American truck sales are slowing down for the first time in years, either due to the high cost of gas or the stigma of owning an environmentally-unfriendly vehicle, my theory is that the wannabes are simply being weeded out while the need-to-bes are standing firm. If you work in one of the trades, or feed your family by doing something that requires you have a strong back, chances are you need a truck. The green movement is not going to sway you and you just curse more at the gas pump.

Since the trades aren't going away (God willing), how can we resolve environmental responsibility with the need to drive big-ass vehicles? One promising answer comes from Via Motors, a sort of automotive co-developer that takes Detroit's existing machines and renders them, through technical wizardry, electrified.

As for power, Via's Vtrux (the hacked Silverado) produces 402 horsepower, so you can throw both Little Sal and Big Sal in the crew cab while still hauling a half-ton in the bed. But here's the real killer app: For those working in remote locations without electricity--you've undoubtedly seen utility trucks hauling those wheeled generators behind them--the vehicle doubles as a generator. That means you can leave the gennie in the garage and plug your power tools directly into the truck. You can also, in a blackout, use the vehicle to power your house.

The only thing that will prevent individuals from jumping on the Via bandwagon right away is the asking price, which is estimated to start at 79 large. You can make that up in fuel savings over time, depending on how much you drive, but that's a big nut for a lone tradesperson to cover. I'm hoping Via sets up a financing branch with attractive rates, at least until their manufacturing costs come down enough for the regular Joe to buy in.

In the meantime they're targeting the people who can cover the nut and will realize the long-term savings: Fleet owners.

Via is currently taking pre-orders for $1,000 a pop. Deliveries are estimated for mid-2013.

Here's a look at their vehicles (and a test drive) taken by Jay Leno and featuring Via CEO Bob Lutz, of GM and Chrysler fame:

Via Motors: The Environmentally-Friendly Answer to America's Truck Woes?