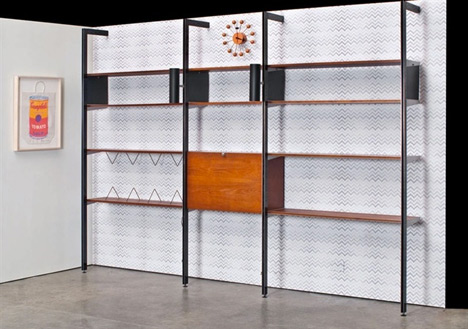 Timelessness, it seems, is a matter of taste: while Dieter Rams' recently-revisited Vitsœ 606 is at the top of my list for furnishings when I eventually settle down, a couple commenters begged to differ. Those of you who prefer the warmer aesthetics of Mid-Century Modern heirlooms are perhaps duly predisposed to the Comprehensive Storage System by George Nelson for Herman Miller. 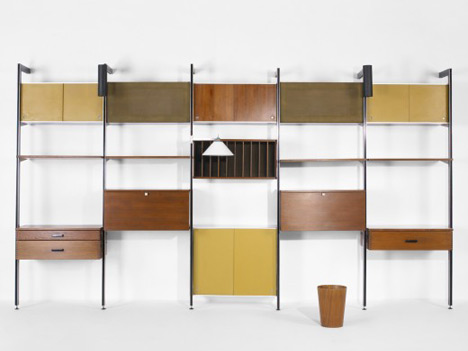 While the CSS certainly rivals the 606 as a paragon of functional beauty, the Michigan-based MCM manufacturers have long since discontinued the product—it's only mentioned in passing as a 1959 milestone in Herman Miller's company timeline. As such, well-preserved examples command healthy resale prices—from around $4,500 to upwards of twice that—on the secondary market. 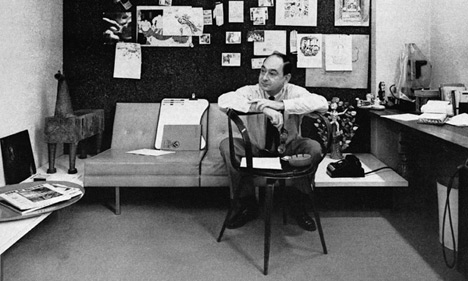 More on the Pretzel Chair below...

However, as of the new Millenium (or Century, as it were), the mystique of George Nelson Associates was beginning to dissolve. It turned out that many of the iconic products and graphics to Nelson's name, produced during his 25-year tenure as Design Director of Herman Miller, from 1947–1972, were actually the work of lesser-known and often uncredited designers. Which is not to say that Nelson was a designer himself: he was an architect and writer by training and trade, and he made few, if any, decisions regarding the designs for which he is widely credited (and acclaimed).

Case in point, Chief Designer Irving Harper has only recently been recognized as the creative force behind the long-canonized Ball Clock and Marshmallow Chair, as well as Herman Miller's logo. The chronicle started with Paul Makovsky's seminal profile of Harper for Metropolis back in 2001 and culminates this month with the forthcoming release of Skira/Rizzoli's Irving Harper: Works on Paper, a 12-year effort by Michael Maharam of textile fame to shine light on the unsung genius in his lifetime (the designer is just a few years shy of triple digits). 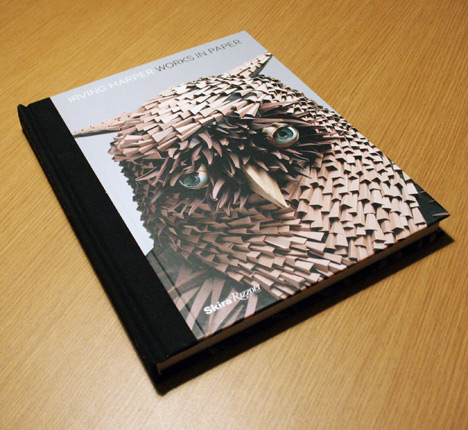 While the new book largely documents Harper's wonderfully imaginative paper sculptures, Julie Lasky's expository text addresses the truth behind George Nelson's renowned studio. Besides his chagrin with the apocryphal tale of the Ball Clock's origins, Harper related to Lasky that his boss was a "very intelligent man, an articulate speaker and a top-notch writer, but not a designer. He didn't sit down at a drafting board." 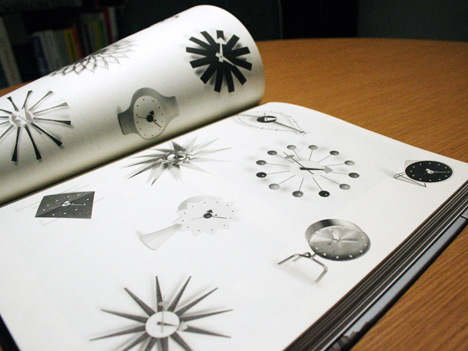 In fairness to Nelson, he held his stable of designers in high esteem—i.e. the healthy working relationship between Herman Miller and the Eames Office—and I'll be the first to concede that I'm hardly an expert on the design doyen. I've added Tomorrow's House and Stanley Abercrombie's definitive biography to my reading list, but for now I have to settle for the AIGA's highly recommended online biography of Nelson.[Nelson] fought the prejudice of a population he termed "visual illiterates," people who confused design with style, who hadn't developed any critical visual faculty, who didn't understand that the immediately apparent "look" of something was not design at all; that design was, to the contrary, an internal, necessary, and ineradicable logic inherent in the fabricated, synthetic world. Design, for Nelson, made the mind's eye visible, tangible, comprehensible in the language of materials of the physical world. 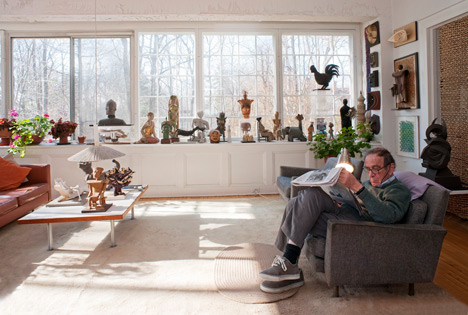 Nevertheless, the release of the book is the occasion for an excellent chronicle of Harper's legacy in Collectors Weekly, in which writer Lisa Hix cites a handful of awestruck visits to the designer's current residence in Rye, New York, over the past decade, in addition to Makovsky and Maharam's firsthand accounts. It's well worth the read if you're remotely interested in this secret saga of American design, but if you're pressed for time, this Herman Miller video from a few months back explores his post-Nelson work (but glosses over his work for Nelson):

And despite the fact that "George didn't give me much credit," Harper fondly recalls his time at the studio, which provided an opportunity for the introverted designer to express himself through his work. Indeed, George Nelson's work for Herman Miller is an enduring (albeit partially untold) success story that remains aspirational to this day, and it is only a matter of time before more obscure designers such as Harper are recognized alongside the figurehead to whom their work has long been attributed. 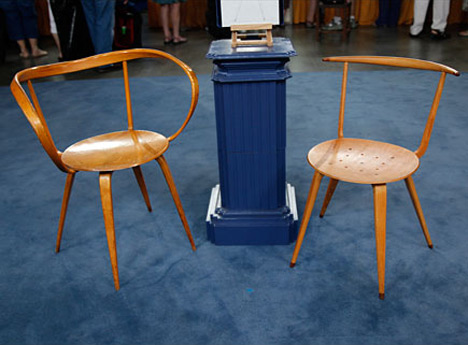 Which is precisely why I was curious to come across the coveted "Pretzel" chair in a recent Antiques Roadshow segment (via none other than a contemporary incarnation of Herman Miller):

Curious to learn more about the distinctive design object, especially the appraiser's offhand comment that "Nelson himself probably did not design this chair," I came across a brief history via Vitra, who reissued the chair (in a limited edition of 1,000 pieces) on the occasion of Nelson's 100th birthday (in 2008). However, another Antiques Roadshow clip (which happens to predate the above one by a couple years) discloses the identity of the original designer of the "Laminated Chair," as it was originally known. Besides the fact that the chair took its nickname in the 80's, appraiser Leigh Keno identifies the chairs as prized prototypes: it turns out the inquirer none other than the daughter of designer John Pile, who worked for Nelson in the 50's.

Per Makovsky's 2001 article:Pile, who worked in the office during the 1950s when it was officially known as George Nelson and Co., offers an explanation on the murky issue of authorship: "George's attitude was that it was okay for individual designers to be given credit in trade publications, but for the consumer world, the credit should always be to the firm, not the individual. He didn't always follow through on that policy though." 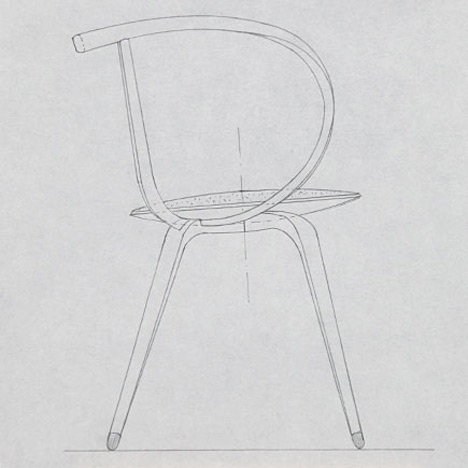 An early sketch of the Pretzel Chair by John Pile, via PBS

Lastly, in the interest of due diligence, I was curious to stumble upon the story of the Cherner Chair in our archives (to paraphrase Kramer, "these pretzel chairs are making me thirsty"... for more MCM). Since I don't have the wherewithal to fix the broken formatting of the 2002 article, I've reproduced it here in full. Enjoy: 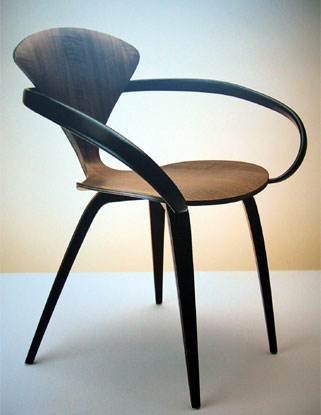 Ask Ben Cherner when his interest in his father’s work began, and you begin to understand the term ‘legacy’. "My father’s studio was next to the house," Ben recalls, "so even as children we were consulted on his latest designs. He loved his work and it was a very positive influence on me and my brother." Ben’s father, Norman Cherner, was a noted furniture designer in the late 50’s; one of a remarkable group who’s ranks included George Nelson, Charles and Ray Eames, and Isamu Noguchi. He was most distinguished for the chair that his sons are now reintroducing in a reissue.

The chair itself is a shining example of the complex bentwood furniture that came out of the 1950’s modernist design boom. The seat and back are molded out of a single piece of tapering laminations, narrowing at the bend like the waist of a Vargas girl. The legs are slender and poised, giving the chair a delicate nature that belies its actual strength and stability. By far, the most striking feature is the curving, ribbon-like arms that wrap around the back and disappear under the leading edge of the seat. The effect is that of constant movement, of a flow to the static elements that give the chair it’s unique appeal.

In 1958, the Lawrence, Massachusetts manufacturer Plycraft (known for their ability to bend and mold thin strips of laminated wood) sought a designer to improve upon the ‘Pretzel Chair’, a design that George Nelson created for Herman Miller. Nelson suggested Cherner, who agreed not only to redesign the chair, but also work closely with Plycraft to overcome the significant manufacturing hurdles. An historic chair design was born, but with it came struggles and legal battles over ownership rights with Plycraft. Cherner eventually won the suit, though Plycraft continued to manufacture the chair until the factory’s destruction in 1972.

Since that time, several imitation versions were introduced; whose poor quality and inferior build tarnished the Cherner Chair image. Not wanting to see their father’s design lost to history, Ben and his brother, Thomas, sought out a manufacturer who could re-create the design to its original specifications at an affordable price. However, the ‘new’ Cherner Chair isn’t merely a replica; it’s an exact reproduction created with the same blueprints, tools and processes that Norman and Plycraft utilized. Only small changes have been made to the molds, to improve manufacturability. The signature graceful curving arms are now made of bent wood (as opposed to the laminated wood of the original), a detail lost to prohibitive costs in 1958. In reality, the reintroduced version is closer to the designer’s intent than the original.

NB: I wasn't able to identify who designed the CSS—extra credit to any reader happens to know who came up with it...