Production Methods vs. Piracy: New York Aims to Shoot Down Forgeries with Lasers 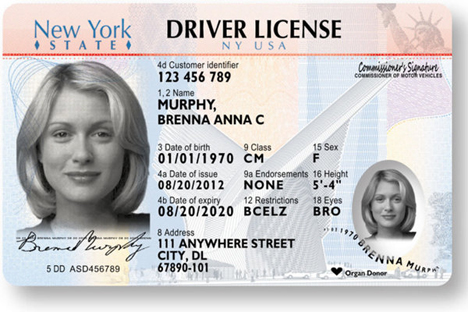 A driver's license is meant to be induplicable, so you might ask why on Earth New York State has decided to switch the headshots from color to black and white. Surely a greyscale image is easier to knock off than a color one? That's true with printed images, but the headshots on the new licenses will use a more esoteric production method: Lasers.

In a bid to eliminate forgery, the NYS Department of Motor Vehicles will still capture your image with a conventional camera—but a high-end laser engraver will then burn your mug onto a polycarbonate sheet. While the official language is understandably vague, it appears polycarbonate was chosen because it can essentially be fused shut—unlike earlier, laminated versions of driver's licenses. As anyone who's ever owned a skateboard or abused a piece of plywood knows, laminated layers can be separated. In the case of licenses, that separation allowed tampering that a polycarbonate material would preclude. A host of other identifying measures not subject to public scrutiny are to also be embedded within the material.

One thing we're curious about is how thick the cards are, and how much the new, stiffer material will flex inside a wallet you're sitting on. "The new cards are so stiff," the Times reports, "that they sound like a compact disc when dropped."

Production Methods vs. Piracy: New York Aims to Shoot Down Forgeries with Lasers