What's the Most Transformative Object of Our Era? 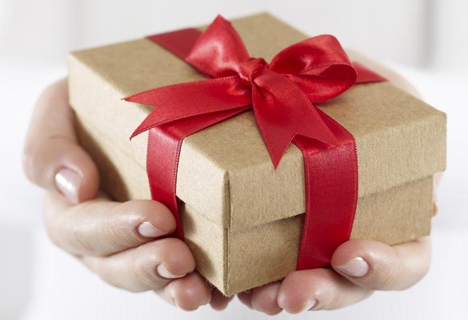 People invented elevators, which eventually led to skyscrapers. People invented cars, which led to highways and then suburbs. The full extent of the transformative power these objects contained was probably difficult to imagine when they were just trying to work out how to get a piano to the third floor, or how to get to the next town without saddling a horse. And it took decades for these objects to change our lives: The first successful instance of what we'd recognize as an elevator was installed in the 1850s, and we didn't get the Chrysler building unitl 1930; the first gas-powered automobile came around in the 1890s, and we didn't get highways and suburbs until after World War II.

I'm going to say the most transformative object of our era is the internet-connected smartphone. It's staggering to think the iPhone came out less than six years ago and it's already changed everything. And speaking of smartphones, here's a screencap from one. A few months ago there was an amusing question asked on Reddit, and one of the better answers has now gone viral: 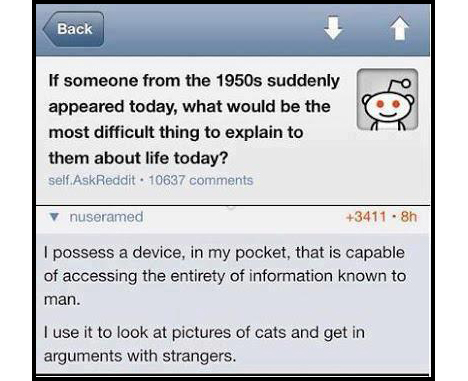 Ironically, the smartphone has given me the opposite problem of arguing with strangers: It's taken some of the fun out of idle bar-room chatter, as my buddies and I can no longer sustain an argument about how old Ralph Macchio is, whether the term "Eskimo" is offensive, or if the Punic Wars lasted more than a hundred years. Someone just looks it up and announces the answer, temporarily killing the conversation while we all simultaneously take glum sips of beer. I wonder if pub discussions are more lively in basement bars where you can't get a signal.

Neither do I look at pictures of cats, as that's a total waste of time. Videos of cats are way better.

What's the Most Transformative Object of Our Era?