Case Study: Greater Good Studio on Designing Everything but the Food, Part 2

This is the second half of a case study by Chicago's Greater Good Studio, who recently set out to redesign school lunch. See the first part, including Lessons 1–4, here. 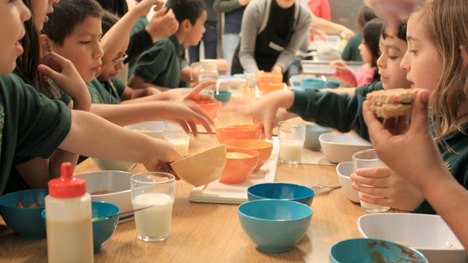 Lesson 5: Ask what you can make and measure.

One concept we'd like to highlight is called "Courses," and it eliminates the lunch line completely. Kids go straight to their tables, where the food is served to them by LRAs, one course at a time. Rather than getting one quick moment to choose a whole tray, the Courses system gives kids four moments to choose their dishes: carrots or broccoli, salad with dressing or without, chicken or tofu, apple or orange. And each moment of choice lasts as long as they need—there's no one waiting in line behind them. They can see what their friends are eating and feel supported when trying something new. Plus, each new dish brings a small rush of anticipation, greatly increasing the focus on food. The process allows adults to decide the order of the courses, so if they want kids to eat more salad, they can just put the salad first. (I've never seen kids get so excited about salad as they did with our prototypes!)

What's great about the Courses system is that it bears striking resemblance to something we're all familiar with: a restaurant. We simply had to apply that service to a new context. However, all services require people, and the people who needed to change their behavior the most were the LRAs. So we listened closely to make sure we were supporting their desired behaviors too. We heard that the LRAs' favorite part of their job was interacting with kids. They'd rather be chatting with a child than dishing food onto a tray. While the current system gives them one interaction point at the big serving station, the Courses system gives them four. They can be closer to the kids, and therefore more helpful, when they are out among the tables.

When we prototyped the concept with real kids and real food at AGC, we heard lots of positive feedback from students. They liked that the bowls were lighter and smaller than trays, giving them confidence when carrying them to the trash. They liked that the bowls gave them more elbow room at the tables. And they even liked that when they inevitably spilled their milk, it didn't spill into the tray and make their meal soggy.

But the most encouraging result of our behavioral prototyping came from something the kids couldn't tell us—something we observed in their eating behavior. It was an increase in eating balanced meals. Kids with trays often ate one, maybe two of the four food items. Kids with Courses sampled all four. Not only did they eat more and waste less, they ate more balanced meals—a metric that the public school system would actually care about, because it sounds suspiciously like health.

So the lesson for designers is to ask not only what you can make, but what you can measure. The only way this concept will be replicated at other schools is if we can prove quantitatively that kids eat more balanced meals, and that balance affects health. Measuring this is tricky, but we've just completed our study of balance pre-Courses. We intend to study balance with a trial of Courses very soon, and we're optimistic about the results.

Lesson 6: Design for every last barrier.

The physical elements of Courses are a collection of plates and bowls, long trays to hold them and a cart to bring them around the room. Sounds fine when you're talking about one table, but when you realize that you need 600 bowls, you start to discover the unintended consequences of this change. One thing that came up right away: how are we going to do all these dishes? 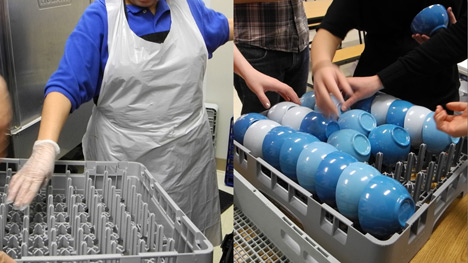 The current trays are washed in 15 dishwasher cycles, which takes about an hour and a half. When we loaded our prototype bowls into the dishwasher trays and did the math, they would take 20 cycles, adding an extra half hour of dishwashing onto someone's job. We knew that this small issue might actually be the difference between the whole system working or coming crashing down. The final bowls and trays are designed to be shorter and flatter, making them more compatible with the current dishwashing system.

The lesson here is to go willingly toward every last barrier, and not stop until they've all been uncovered. After all, the reason that most social problems aren't solved is because there are barriers in place. Often really little, really stupid barriers. Decision-makers go for the big picture but forget the nuanced details. It's our responsibility to challenge those barriers head-on with our designs. Find them, understand what's really going on, and see if compromises can be made. Because we can't afford to sacrifice time and money and food and health because our bowls don't fit in the dishwasher.Lesson 7: Design for actual users.

One reflection from the project is that when you go through the design process with a community, you engage that community well beyond initial research. When we brainstormed, we brainstormed with staff and parents and teachers and even kids at AGC. Our final concept presentation was to them, making them both our users and our clients. 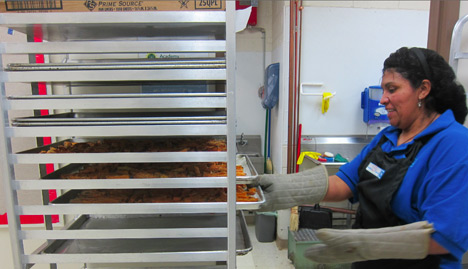 The point here is that in the business world, design research takes a representative sample. Whether they are extreme users or just the middle of the bell curve, our "users" are often not the ones actually using our product or service; they're just likely to. In this case, these were literally the actual people we were designing for. When you know that your users are actual users, and not representative ones, you listen harder, you take them much more seriously, and you genuinely solicit their ideas and feedback, way more than once. Because their buy-in is make-or-break.

Our project actually produced a whole collection of concepts, including tables that fold into the wall, ambient clouds that help the room transition and change moods, a visual menu depicting today's meal, a world map depicting the sources of raw ingredients, and a food passport that connects what kids eat in the lunchroom with what they learn about in the classroom, and what they talk about at home. 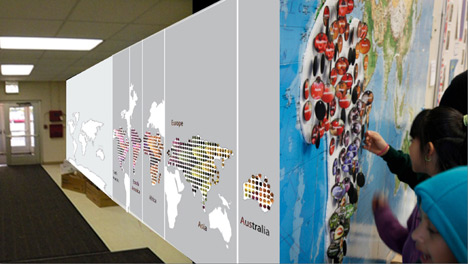 We designed some of these things just for AGC. We know that some elements probably won't be replicable in other schools, and that's a risk we were willing to take. But we think some will, and the next phase of our project will hopefully explore how to create a toolkit of parts so that other schools can take what we've done and apply it in their context.

The lesson here is impact first, scale second. Scale is great, and in the social sector, it's all the rage—every foundation wants to take great ideas to scale, and that's important—if we are helping people, let's help more of them. But often this becomes the cart before the horse.

We'd prefer to make impact first, and then worry about what to scale and how to scale it. Because if we haven't had impact somewhere, then there's no point in talking about scale.

Designing a user-centered cafeteria means designing the behaviors within that cafeteria, and our goal is nothing short of behavior change. At Greater Good Studio, we have three core beliefs: we believe that research changes design, not only how you design something, but what you design in the first place. We believe that design changes behavior, and this project is one example of how to support positive behaviors between kids and food. Finally, we believe that behavior changes the world—that the world is changed not through grand sweeping motions, but by little tiny human actions, that add up over time to make big change.

See Part 1 of the case study here, and check out the video of Sara's presentation at Interaction '13:

Case Study: Greater Good Studio on Designing Everything but the Food, Part 2