U.S. Government's Never-Ending Quest to Design the Most Difficult-to-Manufacture Object 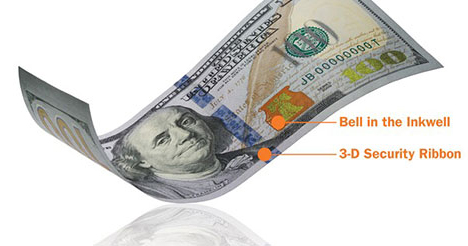 How can you ensure your product design never gets knocked off? By manufacturing it with proprietary production methods and materials no one else has access to. That's always been the government approach to making currency, which is arguably the number one thing you don't want people knocking off. But as manufacturing techiques trickle down, and now that digital imaging has become child's play, the design of physical currency has to continually evolve. That creates a situation essentially the opposite of what industrial design is: Currency makers have to design something that's as complicated as possible to manufacture.

This week the Federal Reserve announced that a new, redesigned $100 bill is coming out, and as you'd expect, the thing is a cornucopia of proprietary manufacturing techniques. It's got embedded thread imprinted with "USA" and "100," and when you hit it with a UV light the thread glows pink; it's got the X-ray thing where a blank space on the bill reveals a hidden face (Benny Franklin) when it's backlit; the copper-colored "100" turns green when you tilt the bill.

It's also got a "3D Security Ribbon" (that blue stripe you see) containing images of a funky bell that visually transforms into a "100." So where's the 3D part? The bell/100 appear to move and shift in a 3D, holographic way while you wave the money around, as we in the Core77 offices do during our weekly dice games in the hallway with the building superintendent and the FedEx guy.Then there's the texture. Ben Franklin's shoulder has been made to feel rough to the touch, like he's wearing a Carhartt jacket, through an intaglio printing process. ("Intaglio" is basically the printmaker's version of embossing.)

Additionally, the graphics have been changed--now the image on the back is of the rear of Independence Hall, as God knows we're all sick of seeing the front--and new symbols have been added, like the quill pen used to sign the Declaration of Independence.

The new C-note is scheduled to "launch" on October 8th. I'm not quite sure how they disseminate the new bills; I believe they dump them over the third-floor railings of crowded shopping malls. What I do know is that I'll have a better chance to observe the bill's design details in short order, as October 8th is a Tuesday, and our dice games are on Wednesday. After I win a bunch of these from my fellow degenerate staffers I'll report back.

U.S. Government's Never-Ending Quest to Design the Most Difficult-to-Manufacture Object