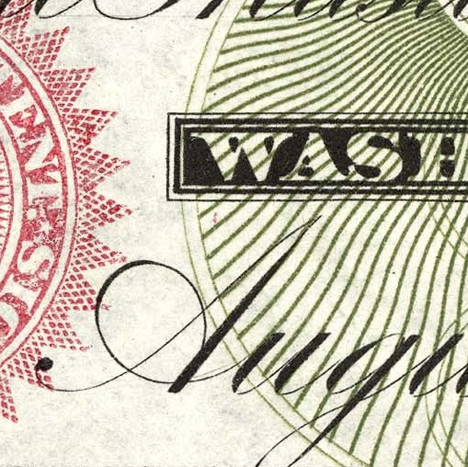 The new $100 bill we looked at is loaded up with anti-counterfeiting measures. As a result, the thing is butt-ugly, no? Way too crowded with design elements, and some of you will insist that older money is a lot classier-looking. Well, not so fast--let's go back to the 1860s, when the U.S. Treasury first began issuing paper currency. Have a look at this $1 bill from 1862:

The $2 bill from the same year doesn't look much better:

And 1862's $5 bill gets even crazier, wedging in a statue of Freedom personified under a Romanesque arch, with Alexander Hamilton hanging out on the lower right:

As you can see, from its earliest days U.S. currency was designed to be as difficult as possible to knock off. Hence it was jam-packed with different colors of ink, doodle-like patterns that were intricate for the sake of being intricate, a mess of varying typographies, and the occasional celebrity bust.

By 1865 we start to get more artsy, with little engraved scenes depicting the American spirit and/or historic moments. In this 1865 buck we've got "Two Maidens in Front of Altar" on the front, and "Landing of the Pilgrims" on the back.

Bigger bills like 1865's $50, however, doubled-down on the typography:

By 1869 we start to get something approaching today's dollar bill. You've got your George Washington portrait in the center, flanked by a portrait of Chris Columbus, whom many of you know as the director of the first two Harry Potter films.

The $5 bill got a little prettier that year, with something approaching symmetry. They also put a dog into the central portrait of a "Pioneer Family," which is cool because dogs are cool:

Paper bill designs would continue on like this for a couple of decades, bouncing disparate design elements around on different parts of each bill. It wasn't until the 1890s that, in your correspondent's opinion, we started to see some seriously cool money. We'll show you that next.