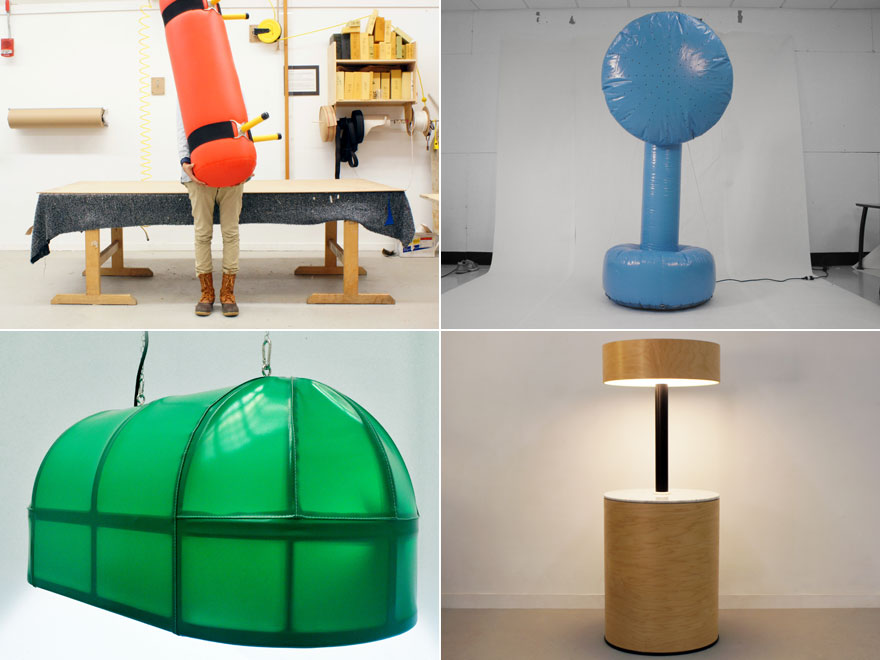 We've been fans of Jamie Wolfond's work since he turned up on our radar at RISD Furniture Design's "Transformations" exhibition in Milan last year. The Toronto native and recent grad has dabbled in a number of delightfully weird experiments in furniture design since then, from the previously-seen stools and chairs to the lighting and timepieces pictured below.

With his BFA under his belt, the young designer has secured an internship at Bertjan Pot's Rotterdam studio for the summer; he's not yet sure where he'll end up afterward, but his future is looking bright. Wise beyond his years, Wolfond recently took the time to share his thoughts on the convoluted world of designing for manufacture.

I started my degree project intending to work with trades, machines and producers from outside the furniture industry to design and construct prototypes for accessible, producible furniture.

The idea for the project came out of my newfound interest in designing for production. As a young and inexperienced design student, I was immediately attracted to the increasingly popular 'licensing' model. Licensing allows a freelance designer to come up with a project, create a prototype, pitch it to a manufacturer, and hopefully sell the rights to its design, receiving a small royalty for every piece sold. This way of working is particularly attractive to students since it promises the possibility of having one's work produced on a large scale without the financial risk, distribution channels or industry experience that it would take to start a business from scratch.

Further investigation of the licensing model as a way for young designers to see their work produced revealed several problems with the idea of designing products on speculation alone. 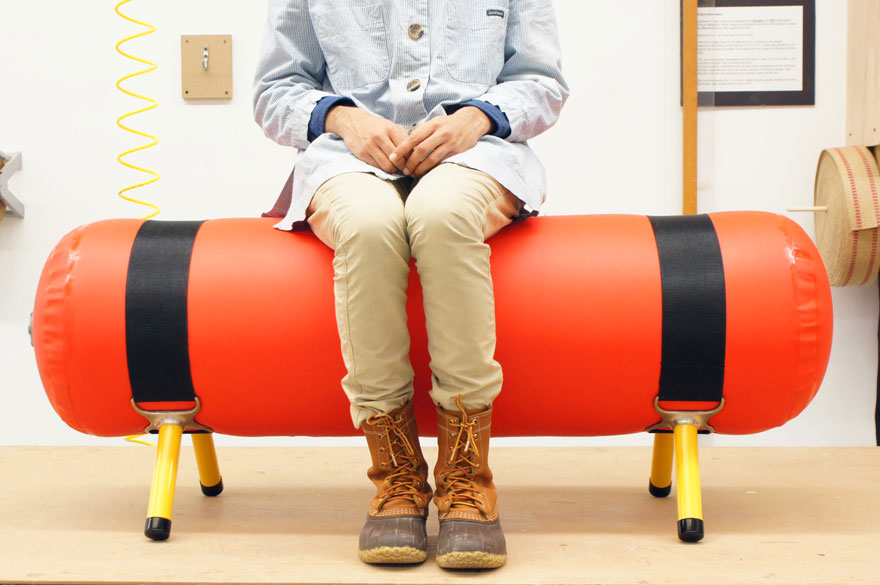 The Emergency Bench is a personal favorite—I love the way it looks like an animal as it inflatesInexperienced designers simply do not have enough practical manufacturing knowledge to understand what might make their design appealing to a manufacturer, and ultimately, easy to produce. Young designers often start their research by looking to industrially-produced objects that more experienced designers have worked on to provide an example of what is possible. Rather than creating a new solution, the resulting work is often merely a reinterpretation of the canon of materials and processes that are already common to furniture design. This combination of clues from existing objects and a basic understanding of the way things are made only provide a designer with a fraction of the information that he or she needs in order to plan for manufacture. A designer will often come up with a prototype in his or her own shop with his or her own tools, claiming the result to be 'theoretically for production.' If a manufacturer is interested in producing the object, the designer and the manufacturer will often re-engineer it to meet the manufacturer's practical constraints. The result is a compromised and often confused distillation of the designer's original prototype. As long as the design and production thinking required to realize a project are separated into two distinct phases, it is impossible to design an object that does not lose something in translation to a producible product. 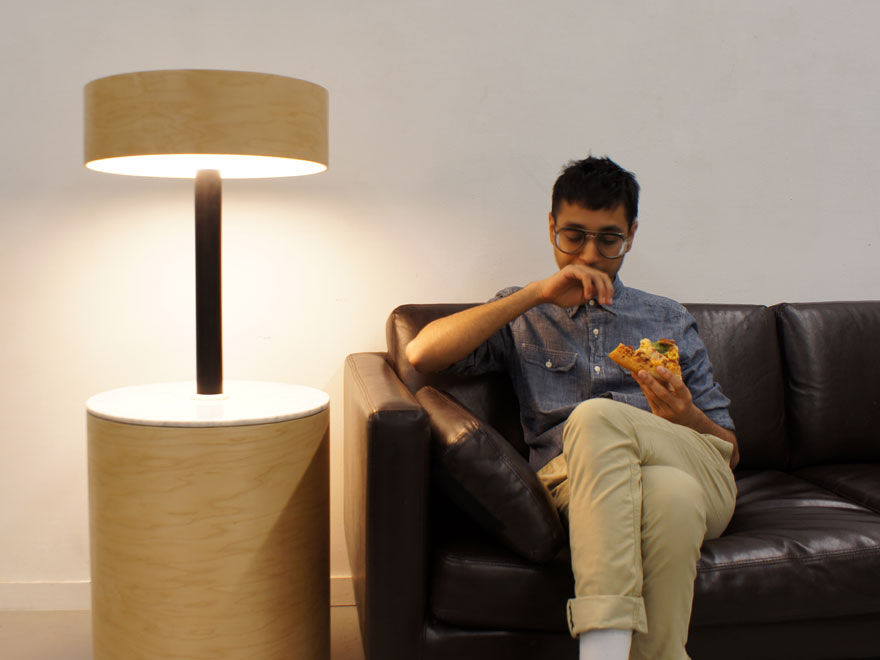 Another problem that a student often faces when designing work for manufacture on speculation alone comes from the common confusion as to what a manufacturer truly is. From my experience, I can see two distinct types:

· A BRAND The companies that we commonly understand to be manufacturers such as Knoll, Herman Miller and Vitra, in fact, rarely produce their own furniture. Rather, they outsource to vendors that have the skill or experience to take on a given project. This means that the path from a designer's initial 'complete' prototype to production is yet another step that may take longer than anticipated. These companies put a tremendous amount of energy and resource toward marketing their products to a particular kind of consumer, exhibiting their work at trade shows, advertising, etc.

By creating a picture that their market identifies with, these brands heavily influence their consumers' aesthetic and practical choices, making them 'insiders' to the furniture industry. This kind of manufacturer plays a role similar to that of a record label, standing between the artist and the consumer, positioning the work in such a way that a certain consumer will see it, and like it.

· A PRODUCER A producer is a vendor who the brand often hires to manufacture the work: a steel fabricator, a woodshop, a plastic molding company, a machinist, etc. They are the manufacturer, literally. In the music industry analogy, the producer is the recording studio, where the product is actually made. A record label will often outsource to a recording studio rather than recording their own music in-house.

There is a commonly overlooked distinction between the tasks of 'designing for manufacture' and 'designing for manufacturers.' A furniture brand buys licenses to the work that fits best with their collection and their company's identity, in which case manufacturing considerations may not be a primary criteria. Designers are led to believe that an object that fits the vocabulary of a certain furniture brand's collection is necessarily easy to produce. This means that the designer often unwittingly excludes certain perfectly efficient methods of production that are merely unfitting to the public image that many of the mainstream manufacturer's have set up for themselves. 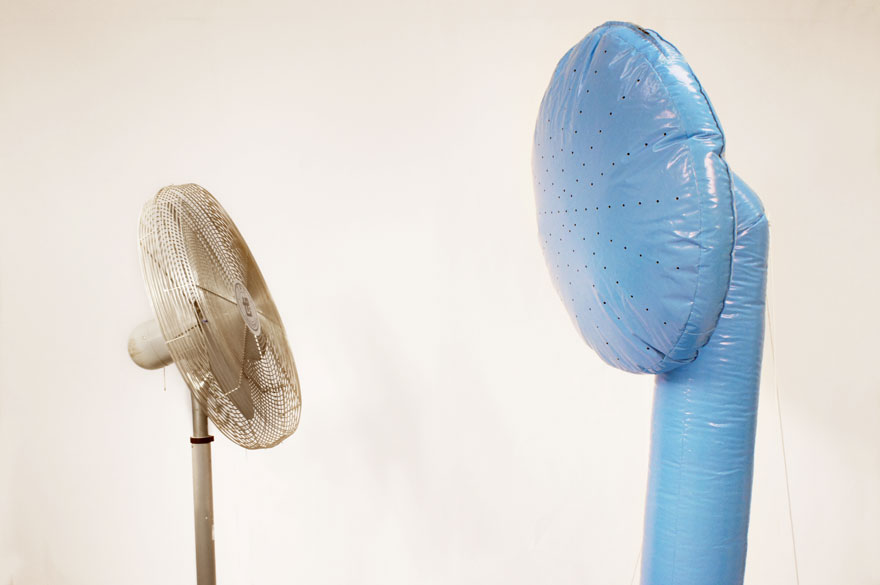 A few weeks ago, I interviewed for a job at a mid-sized company that designs and manufactures household objects and knick-knacks. Since they planned to become more involved with furniture design and production, they brought me into one of their preliminary brainstorming meetings to see how I could contribute.

Prior to the meeting, several designers from the company travelled abroad to meet the producers who would be making their work, which I was thoroughly impressed to hear about. Surprisingly enough, the 'brainstorm' meeting involved methodically ruling out manufacturing processes that were "not relevant." For example, one designer suggested weaving as a potential method of producing a table. The idea was not fully formed; the suggestion was merely an abstract thought about a method by which the company might make a table. Another designer quickly retorted that weaving is out of style, citing their competitor's catalog from several years past as evidence.

There are a great number of materials, processes and producers that have picked up a stigma over time, and have therefore become unappealing to companies that want to establish themselves as contemporary. The result is a constant quest to use the newest, most up-to-date technologies rather than examine the potential of the processes and materials that manufacturers are already equipped to work with. For example, a chair that can be produced from four wooden parts cut on a CNC machine seems fairly easy to make. It certainly does not require much human labor—as long as you have a CNC machine. The part that seems to go unconsidered is the effort, energy and resources that it takes a producer to adapt to the new technologies prescribed by the rest of the industry.

This industry's constant thirst for new technology creates a self-perpetuating disinterest in otherwise viable solutions. The value of any given material or process (whether it be woven rattan, cast gold or carved wood) is completely ephemeral, and in fact determined largely by the way in which manufacturer and brand treat and market it. As long as 'insider' furniture brands—like the one I had the pleasure of visiting—exclude existing resources, namely manufacturing systems that are already in place, those systems will remain irrelevant to consumers. 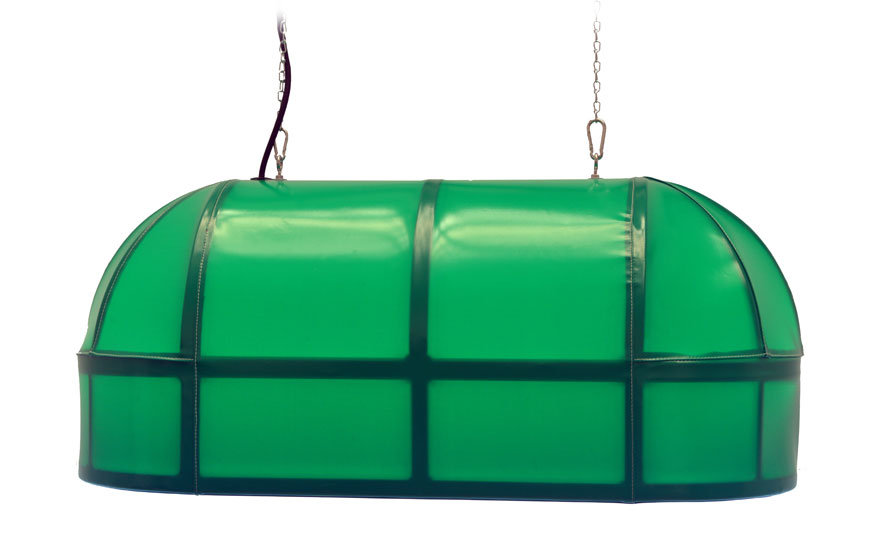 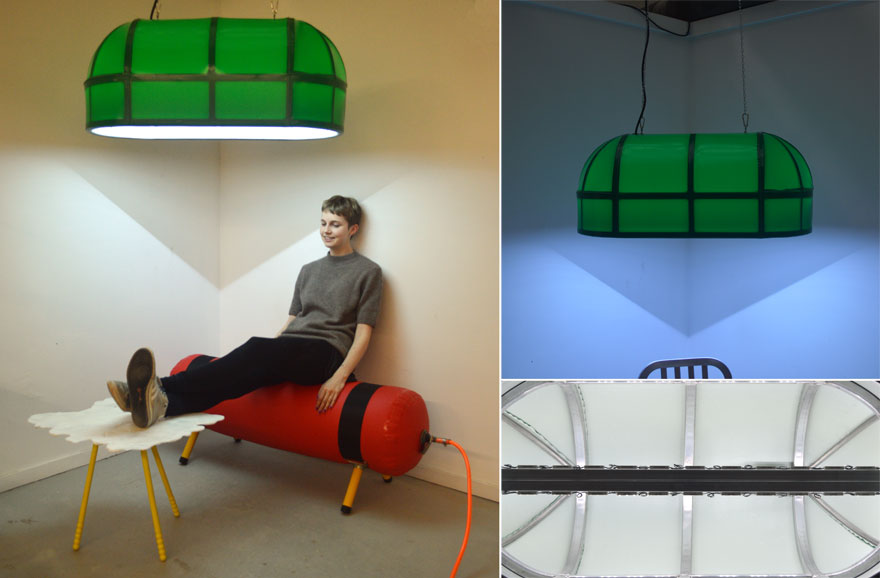 I had an elementary school teacher who insisted on teaching us about the mechanics of the earth and moon through an approach that he called 'Radical Skepticism.' Rather than basing our understanding of planetary motion on predetermined knowledge from a textbook, we conducted experiments that helped us determine some truths about the universe for ourselves, leaving us with a rich and thorough understanding of the subject, rather than a cursory knowledge of certain pieces of planetary trivia.

I guess I was particularly excited to learn this way because it coincided rather seamlessly with the way I already preferred to teach myself—by doing the things that felt right until I could figure out some reason why not. Most of the time, I arrived at conclusions similar to the conventionally accepted ones, but once in a while I would get away with something nobody thought I could. Here is an example:

I didn't pay my electric bill this year—I didn't even set up an account with National Grid. After eight months of accumulating debt, National Grid shut off my power. When I called to reinstate it, it turned out my name had been mistakenly attached to someone else's apartment's bill; that the bills I hadn't been paying were not my own. Since there had been no name on the bill for my own apartment, National Grid cleared all charges and restored my power. Why not avoid paying my bill all year? There was no reason. 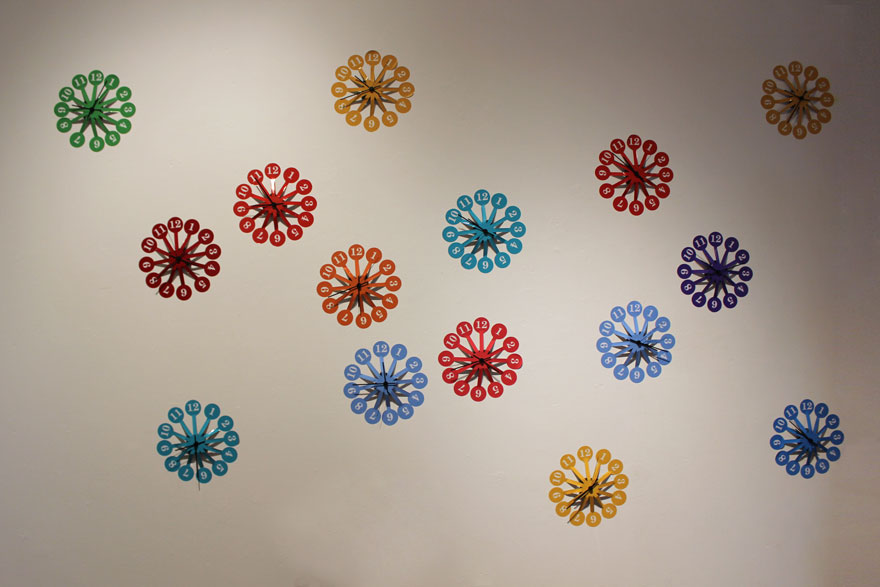 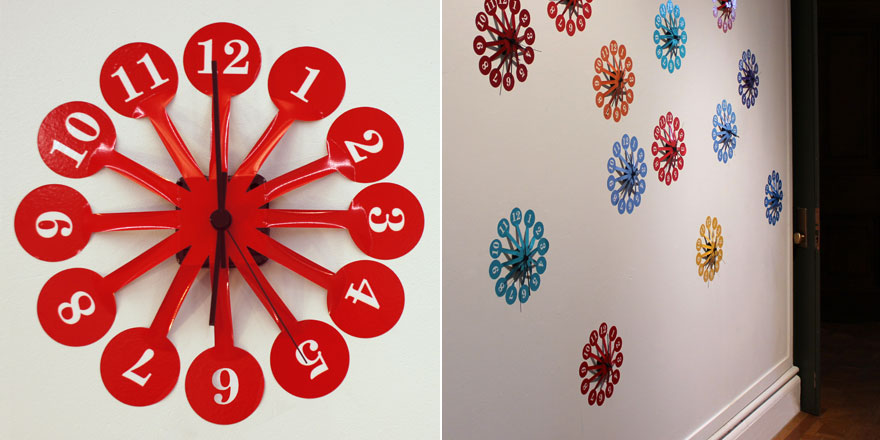 Instead of designing in the abstract, finding a producer, and forcing my object to fit with their manufacturing system, I worked directly with the manufacturer (the second kind listed above) to influence the very earliest phases of my projects' conception and design. The resulting objects would not be compromised, distorted or lost in translation on the way to becoming a viable producible product.

I created a system whereby I research a manufacturing process, plug in, a problem, and allow the experience, strengths, capabilities limitations and even taste of the manufacturer make some of the most important decisions at the outset. Working with manufacturers from outside of the conventional furniture industry, I was able to generate solutions that are uninhibited by the bias of the conventional furniture brand.