Editor: This True I.D. Story is a good one! Fitting in that it comes to us from "Good Ol' Boy." Enjoy!

Maybe it's not fair to say my school's industrial design program, at a well-known university in a big-ass city, didn't adequately prepare me for the real world. But I'll say it anyway. As one example of the low demands placed on us, during my final year I basically spent an entire semester making Muppets. And I got an "A." 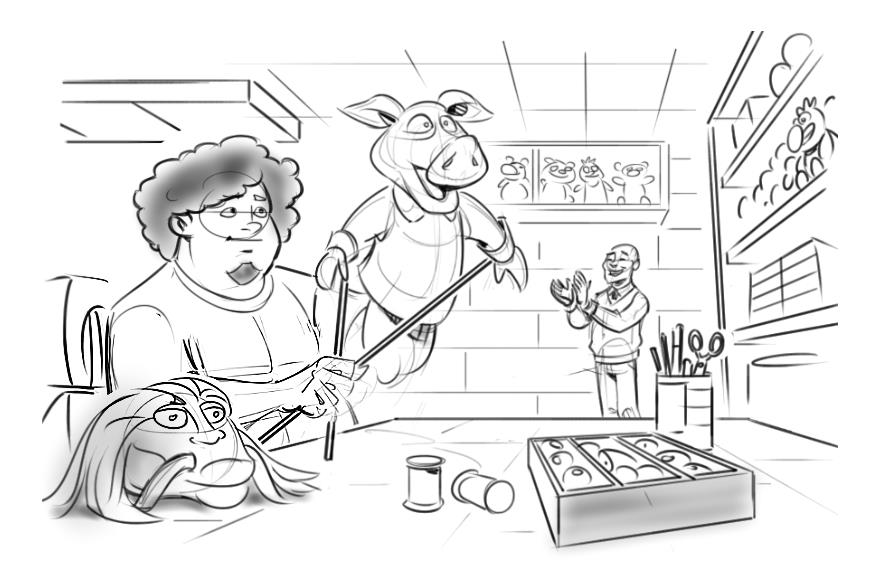 By the time I graduated, I had a portfolio full of weird stuff. The school encouraged us to do bizarre conceptual work and my portfolio was loaded with it. When I look back at that stuff now, I don't know how anyone made heads or tails of it. And people who interviewed me for jobs, particularly the job that I badly wanted, couldn't either.

My Plan to Get a Job

During senior year I'd heard of [Hot Design Consultancy], and I very badly wanted to work there. That was the only ID job I wanted. They did awesome work, they had great clients and they were located in [Cool City], where I really wanted to live.

One of them was from [Hot Design Consultancy]!The Job Interview

I flew down to [Cool City] to interview with [Hot Design]. I knew, I just knew this was the job and the city for me.

[Hot Design]'s office space was everything my design school's studios weren't. It was professional-looking, nicely designed, all sorts of people moving around the facilities with purpose. Phones ringing, awesome renderings hanging on the walls in the waiting room. I couldn't see the shop area from where I was sitting, but a guy passed through and he had telltale blue foam dust on his arm hairs. People were doing stuff here.

My interview didn't last long. [Senior Designer Guy] looked through my portfolio, and the one expression I saw on his face was puzzlement. 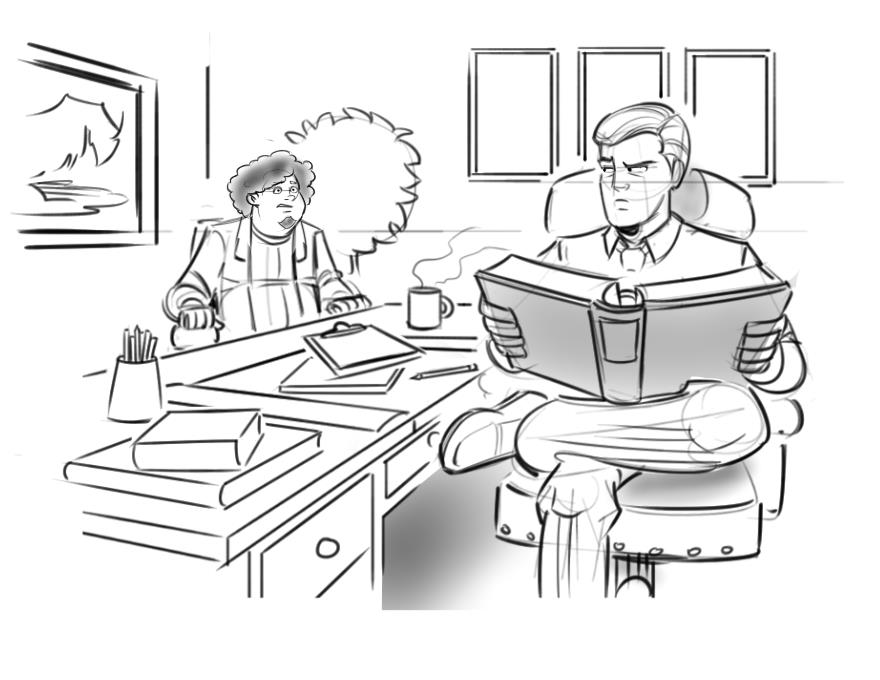 My book was all 24×36 pastels and charcoals of weird, out-there concepts. "Well, [Good Ol' Boy]," he said, "we're really looking more for stuff like this:"

He produced a bunch of 8.5 x 11 line drawings of like, blowmolded bottles and stuff. The sketches were black ink on white paper, tight, precise, rational. Next to their stuff, my stuff looked like crap.

"I can do that stuff," I said, trying to muster up confidence. "All I need is a Rapidograph set and a drafting table. I'm your man. I mean, you don't have to give me a Rapidograph set, I have my own—I mean—"

Either my voice cracked while I was saying it, or my regional accent came on too strong like it does when I get nervous, or my book was just overpoweringly bad; whichever it was, he didn't seem convinced. I got the dreaded "Well, we're not really hiring now, but we'll keep your resume on file."

That was a depressing flight home. And by home, I mean Mama's House. And guess what was waiting for me in the mailbox: Yep, my first student loan payment was due.

My mother's house was out in the sticks. We were pretty poor, and I didn't know what I was going to do—I couldn't afford to keep flying to different cities around the country to interview for jobs, and the fax machine seemed to know this, because it didn't bother sending me any invitations.

It started to dawn on me that my four years of design school might not have been worth a damn, and I had to face the fact I might have to get a job at the local [Hard, Dirty, Dangerous Work] plant. Guys I'd gone to high school with had gotten jobs there, skipping college and the student loans it brought with it. When I ran into Mr. Deus, my old high school art teacher in town, and he asked me what I was up to, I told him I was thinking about signing up down at the plant.

"Well, hell," Mr. Deus said. "You don't need to do that. I know the Design Director over at [XYZ], it's less than an hour's drive from here. I'll get you an interview."

I'd never realized there were actual design jobs in this county, or any of the counties touching it. I'd never heard of XYZ; I.D. Magazine never wrote about them. "What do they do?" I asked.

That was good enough for me.

The Only Game in Town

My elation at discovering there was an actual ID job within an hour's drive was somewhat tempered by finding out what that job was: Designing in-store displays and interiors for supermarket chains. Now this was actually a pretty big local employer—they had 50-60 guys on the road selling and installing the stuff, another 50-60 people at the factory making the stuff, and in the back of the factory, a small handful of designers. And after the interview, I was now part of that handful. (Maybe not the thumb; more like the middle finger.)

In addition to me, there was a girl from SCAD, my boss, and a local guy who never even finished high school but could draw like a sonuvabitch. I envied both his talent and his complete lack of student loans. I didn't envy his mullet. (Been there, done that.)

The job paid $26,000 a year, not enough to move out of Mama's house and just barely enough to make a dent in my student loans. As for the work—the work sucked. I was designing big-ass vacuum-formed fish for the seafood department, blow-molded cows for the butcher's counter, display tables for bacon samples, donut racks, that kind of thing. I tried to get in my fun where I could, like making the fish look like a Chilean Sea Bass when I knew damn well that supermarket didn't sell any goddamn Sea Bass from Chile, but after a while those kinds of gags felt as empty as a blow-molded cow. In short, I was miserable. 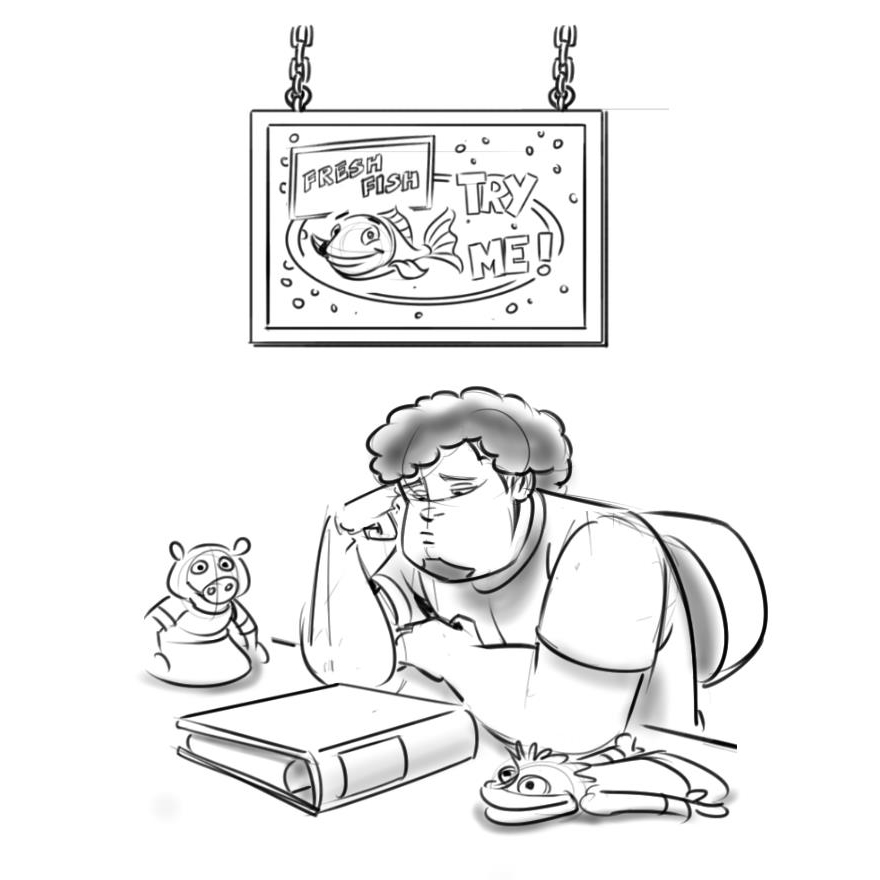 A year went by, then two. People ask me how I could've stayed at a job that crappy for that long, especially now that I'm doing [redacted] design work for big-ass companies like [redacted], and the answer is simple: I was in my early 20s, trying to pay off debt, eating Mama's home cooking every night, and totally fine with driving my grandmother's canary-yellow K-car. 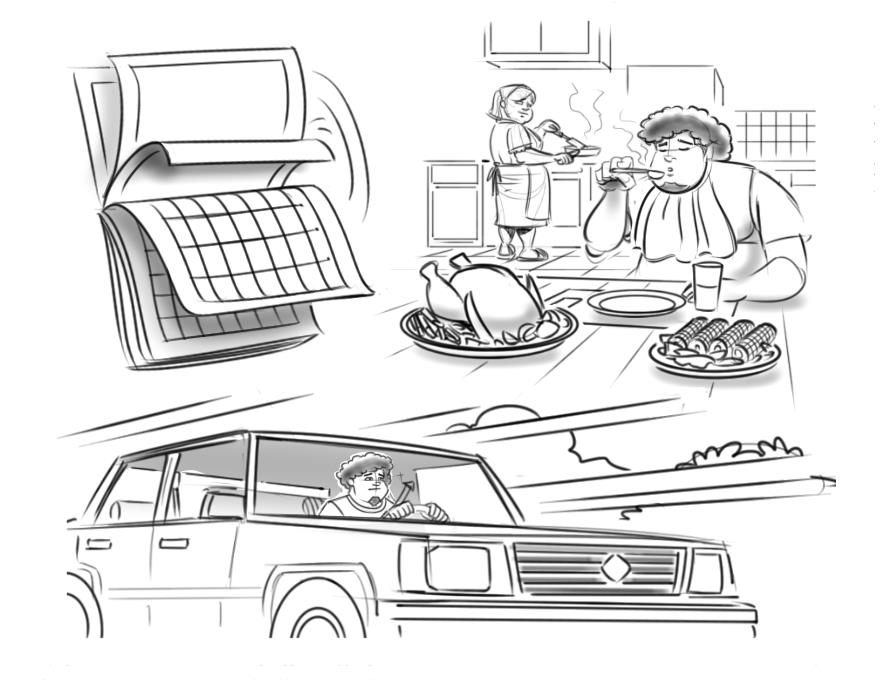 But it was not to last.

One day towards the end of my two years at XYZ, one of the other designers told me the boss was putting us on a special project. I was glad for anything to break up the tedium, and it wasn't until we were halfway through it that I started to think—Where the hell does this thing go in a supermarket?

We were tasked to design, and build, a six-foot plexiglass cylinder turned on its side. On one end we installed a huge fan, as we were directed to. Inside was an airplane model we'd built, attached to a free-moving arm. When you turned the fan on, the plane inside the cylinder lifted up and "flew." 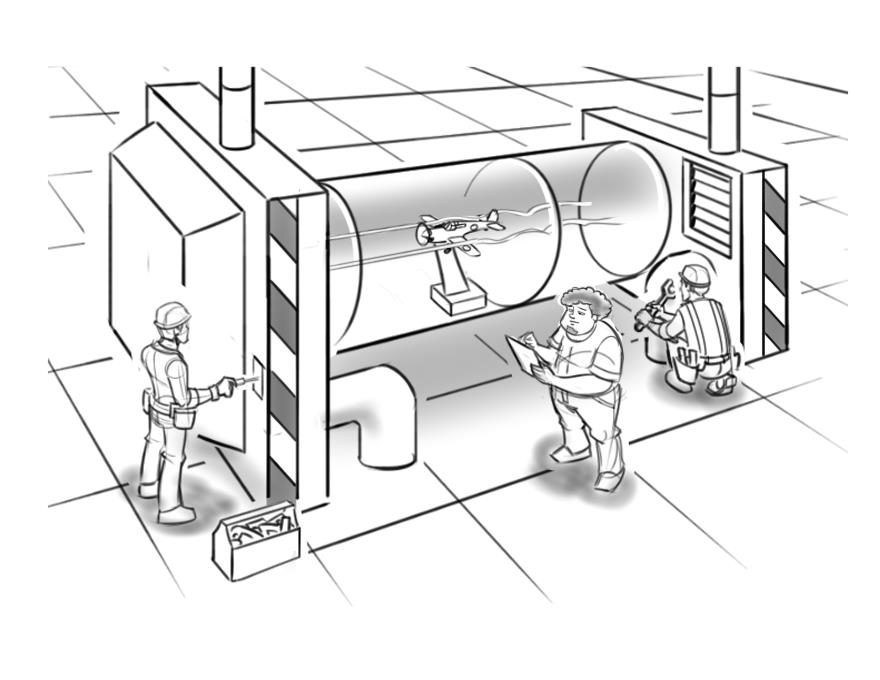 I asked my boss who the client was. "Never you mind," he said. "I need you to draw up some 18×24 illustrations showing why this thing works." He wanted marker renderings of the airplane, cross-sections of the wing, and red arrows showing how the airflow produced lift.

I had just about figured out who the "client" was—when he walked in himself.

He looked over my drawings, pronounced some of them good, made suggestions for how to improve the others. He turned to the boss and jokingly asked if I would be the guy writing up his report, too.

The "client" was the boss' kid. We were designing and building the little shit's project for the local Science Fair. I guess the kid was too busy to build a goddamned mashed potato volcano or whatever.

I went to design school for four years, then wasted all the daylight hours for two years afterwards inside this crappy building. I was living at home and sending all of my money to pay off my student loans. And now I was doing somebody else's kid's homework.

It all started to dawn on me. I knew that I had design talent. I also knew that I wasn't a self-starter, and that if I fell into a hole I'd have a tendency to lie there for a while, especially if it was comfortable and I knew Mama's fried chicken was on the menu for Thursday. And I knew I wasn't reaching for something because I was afraid to fail.

So I finally decided that enough was enough.

And I hatched a plan.