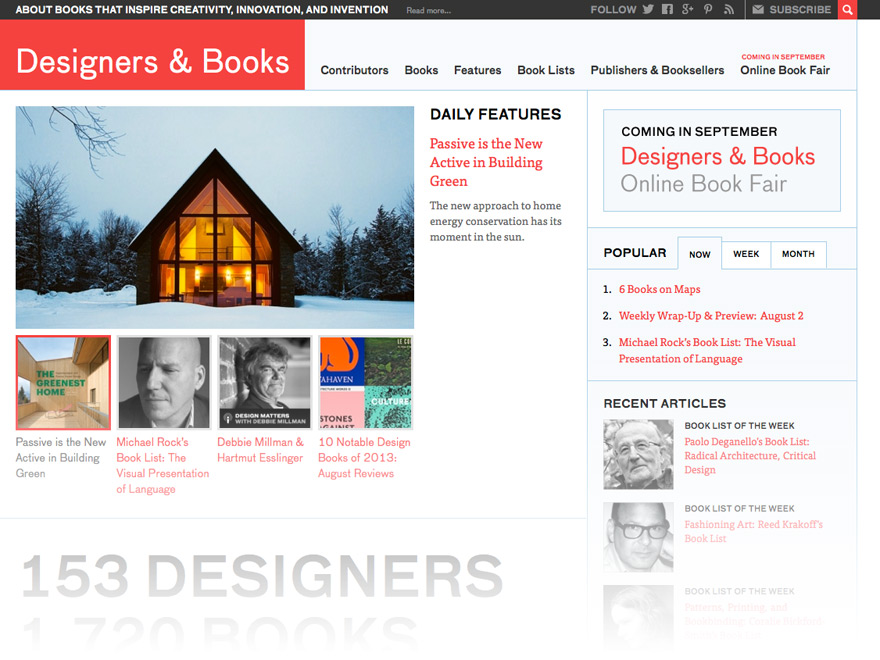 Our friends at Designers & Books are pleased to unveil a new iteration of their website, introducing a new layout with several new features as of the August 1 launch, with several more features and content areas to debut in weeks to come. As the premier website at the intersection of design and books, the site will now be updated daily (as opposed to weekly) with original content that goes beyond the world of design books to that of design in general, alongside book lists from leading designers, which Designers & Books has offered since it launched in February 2011

Of course, the content has grown from the lists—over 150 designers have shared their faves—to include reviews, interviews and even lists of lists, not to mention an IRL book fair last fall (an Online Book Fair—presumably the first ever—will tentatively launch in September).

It's not just a re-skinning of the site, just a new look to match their expanding world of content. The new episode of Debbie Millman's Design Matters podcast—part of a five-part series developed in a collaboration with D&B—is as good a place to start as any; the longtime Design Observer contributor chats with frog Founder Hartmut Esslinger about his latest book, Design Forward: Creative Strategies for Sustainable Change, among many other topics.