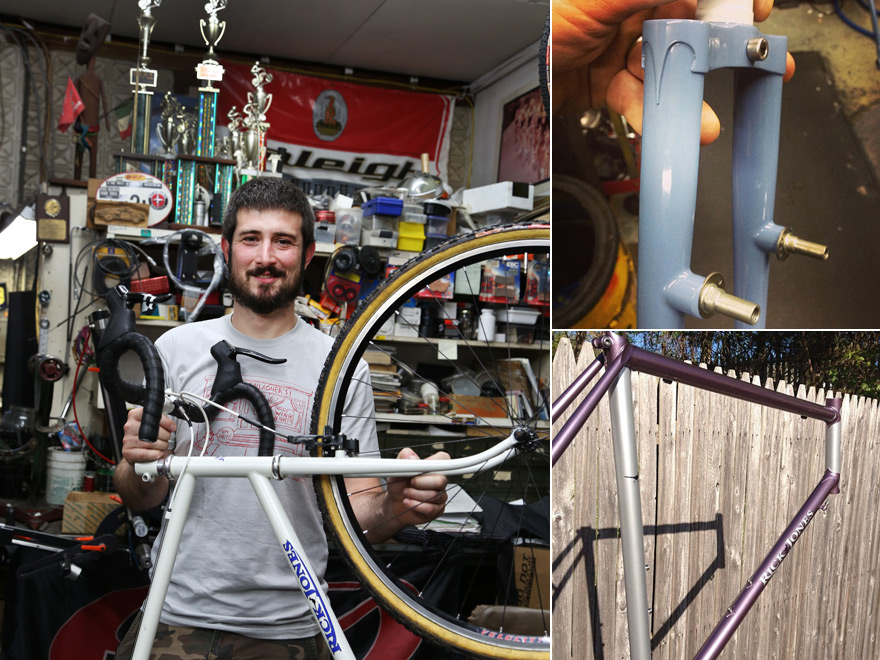 As a specific manifestation of the burgeoning maker movement, the craft of building a bicycle by hand has seen a resurgence in recent years, in tandem (yeah, yeah) with the increasing popularity of cycling in major metropolitan areas. Although the Brooklyn bicycle builder community is a relatively new phenomenon—Johnny Coast is an elder statesman at a decade in the game—cycling aficionados have long regarded the greater Tri-state Area as a builder hotspot, home to the likes of J.P. Weigle and Richard Sachs, who have a collective 75 years of experience between them.

Indeed, one of Harry Schwartzman's goals in producing the event is to showcase the previous generation of builders—those that Jamie Swan of Northport, Long Island, calls "Keepers of the Flame." We'll have more on the elusive Swan (a cult figure in his own right) shortly, but we can glean some of his story through his young charge Rick Jones, to whom he has passed the proverbial torch and, by his mentor's account, may well surpass his forbear.

Nestled in a quiet corner of the North Shore, Jones' unassuming workspace is tucked in the back of his family-owned bicycle shop. Glen Cove is a short train ride away from New York City but a world apart, and if the Road Runners Bicycles storefront probably doesn't look too different from any other suburban bike shop, it's worth noting that it's been around for some 50 years now. The 33-year-old mechanic and framebuilder shared more in a recent conversation with his mentor and friend. 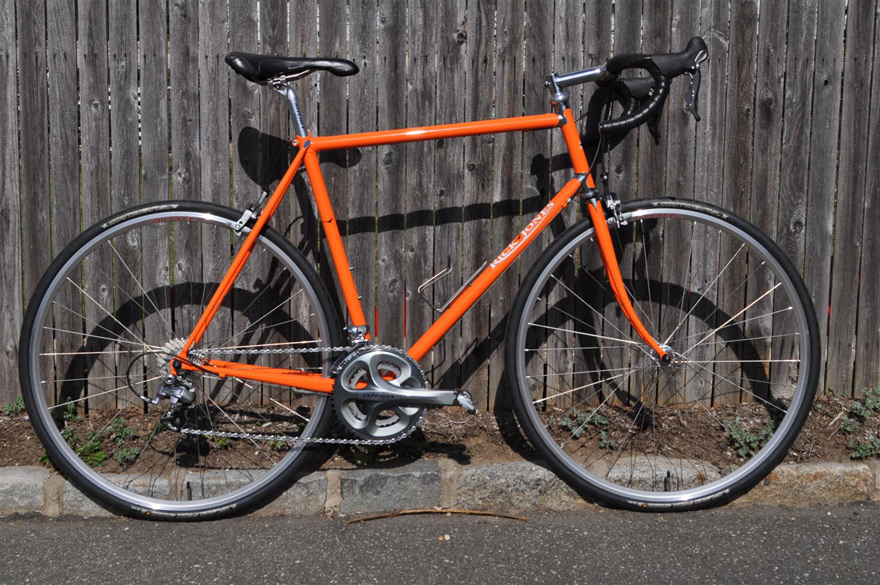 Jamie Swan: Ok, we're at Road Runner's bicycles in Glen Cove, New York. We're talking to Rick Jones, proprietor and framebuilder. Rick, how long have you been in the bicycle business?

I was kinda born into it—my family has owned this shop since before I was born; I've [been] spending a lot of time here since I was about eight years old. Since then, I've probably been here every weekend at least—now I'm here every day—it's just been a big part of my life since as far back as I can remember.

I also raced BMX starting when I was nine or ten years old. I took to it, like I wind up taking to a lot of things: full steam ahead, going for it. In a very short amount of time, I went from just riding a BMX bike to racing on a pretty serious level, full national circuit, becoming nationally ranked... I did that for about three or four years, and then I moved away from bicycles for a while.

And your grandfather started the shop?

My grandfather opened the shop in 1964. It was originally a motorcycle shop, but they'd [also] fix bicycles and eventually morphed from being a motorcycle shop to being a bicycle shop. During that time [in the 60's and 70's] when the shop started out, my father raced motocross, to show support for the lines that they were selling.

Do you still fix motorcycles?

Yeah, we still fix all sorts of old motorcycles and stuff. Mostly vintage stuff that we'd started working on, in that era, when they were doing motorcycles. Today, we still do some restoration work on British and German motorcycles; we do a lot of vintage British—Norton, BSA, Triumph—and BMWs.

And I understand that you worked in the automotive industry for a while?

I spent about seven years as an auto mechanic; I started out working on a variety of high-end European cars, and then moving to Mercedes for the last five years, where I was a factory-certified engine builder and diagnostic technician.

But throughout the time when I was working on cars, like I said, I was here any day off I had, helping out. When I left working on automobiles—it's been about 12 years ago now—it's been a full-time six, or seven, or eight days a week kind of thing for me. [Laughs.]

When and why did you decide to get involved in the family business?

It was almost a matter of necessity. I had lost my job fixing cars and I didn't know what I wanted to do. After working on cars for several years, I kind of decided that as much as I actually liked the actual work of working on cars, I just hated working for car dealerships. It was just a miserable experience for me. I weighed about 325 pounds, I smoked about two packs a day... I was at a very low, depressed point in my life. And just out of needing a salary, I came to work here to see where things were gonna fall for me and figure out where I wanted to head.

I immediately bought a bike, started riding again, and started to see this passion get reignited in me, that I had when I was a kid, racing BMX. And I started getting into mountain bike riding again, and I just started getting more and more and more... more deeply involved with bike riding, bike racing. And it was after a short amount of time when I started back up here again, it was just like, 'Ding, this is where I was supposed to be,' and I realized that this is what I'm supposed to be doing. And it's just been like that ever since.

It's certainly not an easy business to be in—I often tell people that 'It's a good thing that I like what I do, because I gotta do it a lot.' [Laughs.] But it's great, I love every aspect of bicycles. I love building custom bicycles. I love being the guy that, you know, sells a four-year-old his first bike—having this kid look at you like you're god, you know, and you see this future 'Brother of the Wheel,' budding right in front of you. It's a really cool thing—it's a fun business to be in. I find it to be very rewarding. 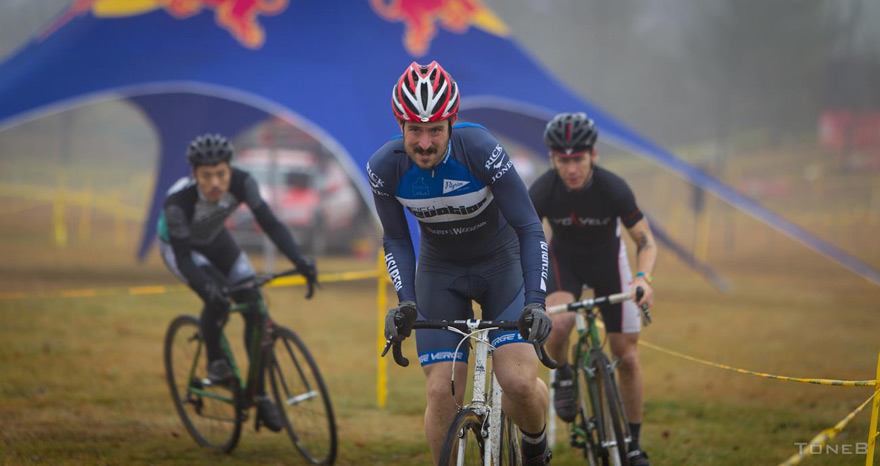 So you had some success as a competitive cyclist?

Yeah, it was a very quick progression: I went from being this 300-pound guy to... coming back here, to work, I started to hit a little bit of a stride... I met my wife, Sharon, who [encouraged me]—'Maybe you should race bikes again'—pushed me into that, and it was just full speed ahead. That competitive fire got lit inside me again. I went from throwing up at my first mountain bike race to winning Cat. 2 State Championship, coming in second place in the Cat. 1 State Championship just a few years later, [climbing to] the top of the local mountain bike scene.

I also started racing cyclocross, completely fell in love with that... I've had some pretty decent success in racing, it's been a lot of fun.

What's the next horizon for you, at the competitive level?

I don't know, I'm definitely giving track a look... I think that's next for me. My body is starting to squeak and make noises from years of abuse, so mountain bike might be at its end... but I might start taking up track next year.

So when did you take up framebuilding?

It's kind of a goofy story. My wife Sharon, who has been an unbelievable inspiration to me, [enjoys] little arts and crafts projects and all sorts of little goofy stuff. So we would wind up spending a lot of late nights here, just hanging out...

One night, we were goofing off, turning a unicycle into a miniature penny farthing. So we get out of here really late one night, and we go down the street to this local bar to get a hamburger. We're sitting there, it's late, I've been working all day, and this guy at the counter starts annoying me, because he hears us talking about this penny farthing we've been building. 'You gotta meet this guy I know, he's into building bicycles, he used to own a bike shop,' and he's going on and on and on, and I just want to eat my hamburger. I don't wanna hear it. It's late, and—totally obnoxious, totally not like me—I just pull a business card out of my pocket and practically fling it at the guy. And I say, 'You know what, have your friend call me.'

And then, a couple days later, Jamie Swan calls me up. And I don't even know how it came about... but just through quick discussion, it turned into like, 'You should build a bike.'

That was about five or six years ago. 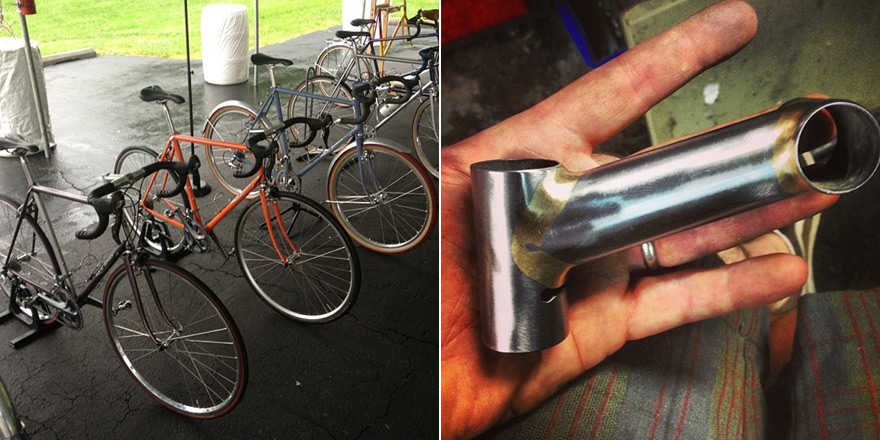 Probably just about two years now. I think I'd built ten [before that]. I've several orders coming in and things are moving right along.

What kind of bikes do you build? Any particular specialties?

It's pretty broad. The majority of bikes I build are road and cyclocross, but I do build mountain bikes as well. I really don't have a specific bike that I build. I'll pretty much build anything. I haven't really gotten into the BMX end of things, but any of the you know, any mountain bike, road bike, cyclocross bike, those are the things that I'm really passionate about.

I do lugged, fillet-brazed, and TIG-welded [steel], as well as (hopefully very soon in the future) titanium TIG-welded bikes as well.

And you sponsored a racing team?

Yep. I sponsored the Cicli Devotion team and got a couple of guys on the team riding my bikes. It's one of my prouder accomplishments—I'm pretty excited to see guys out there, racing the bikes that I built.

So you mentioned someone earlier, Jamie Swan? Was he helpful to you? [Jamie jokingly refers to himself in third person.]

Kind of a prick. [Laughs.] Nah, Jamie is the greatest. Here's a guy who really builds beautiful bikes. But the real amazing side of you is just your willingness to share information, to help, it's been an amazing thing for me. Having somebody who's just so willing to help, so willing to you know to almost push forward.

I've learned tons about metalworking, about joining, about everything—you know, about being a good friend. I've been very very lucky.

You've taught me [to be willing to share]—if anybody asks me anything ever, I do everything in my power to help teach others. It's very rewarding. And you know, it's a small world. None of us framebuilders are going to become millionaires. We all like what we're doing, we're passionate about what we're doing, we might as well be friends. 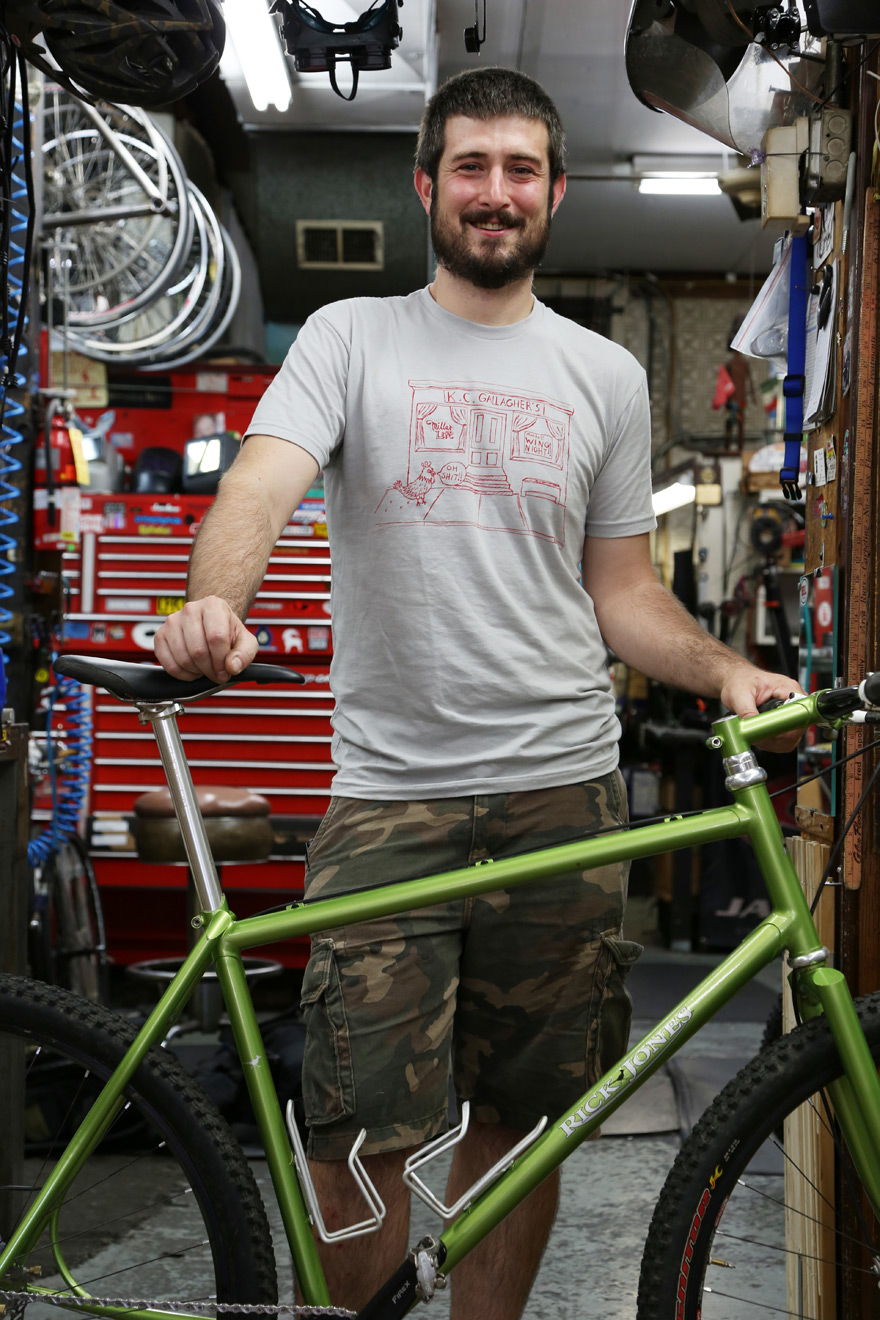 For more on Jamie Swan, check out our final builder profile, and don't miss the Bike Cult Show this weekend, August 30–31, in Brooklyn to see these NYC-area builders along with a dozen of their fellow craftsmen.