For a sports arena that can hold 85,000 people to be built directly on a fault line does not sound promising. But that's what happened in 1923, when UC Berkeley opened their Memorial Stadium, presumably due to a lack of surveying technology. Over the years cracks began to appear in the building, as the Hayward Fault runs directly under the field—practically from goal post to goal post, as you can see below:

With a 62% chance of a 6.7+ earthquake hitting sometime in the next three decades, something needed to be done, and the University recently revamped the stadium. Did they completely tear it down or move it, like you'd think they would? Nope: As the school's Assistant Athletic Director Bob Milano Jr. pointed out in a 2011 article, "The alumni have some great memories at Memorial Stadium, and we have to make sure not to lose the heart and soul of the place."The sheets are now off of the $321 million, three-year renovation, and the results are stunning. Not only has the original facade been maintained and shored up with expansion joints, and the entire stadium divided into seven separate, self-adjusting pieces, but the unlikeliest of structures—a fairly insane-looking "floating press box"—now crowns the stadium, built though it is on "seismically unsafe" ground.

The two-story, 375-foot-long box is a masterpiece of design and building technology and, like the football it's designed to overlook, is a result of teamwork. (See the full list of contributors below.) While the ground beneath the stadium currently creeps at a little over a millimeter per year, should the fault rupture and create a seismically violent event, the structure can withstand six feet of horizontal movement and two feet of vertical. And last Friday the press box was awarded a 2013 Innovative Design in Engineering and Architecture with Structural Steel Award, which is "the highest award we give," according to the American Institute of Steel Construction representative Larry Flynn. 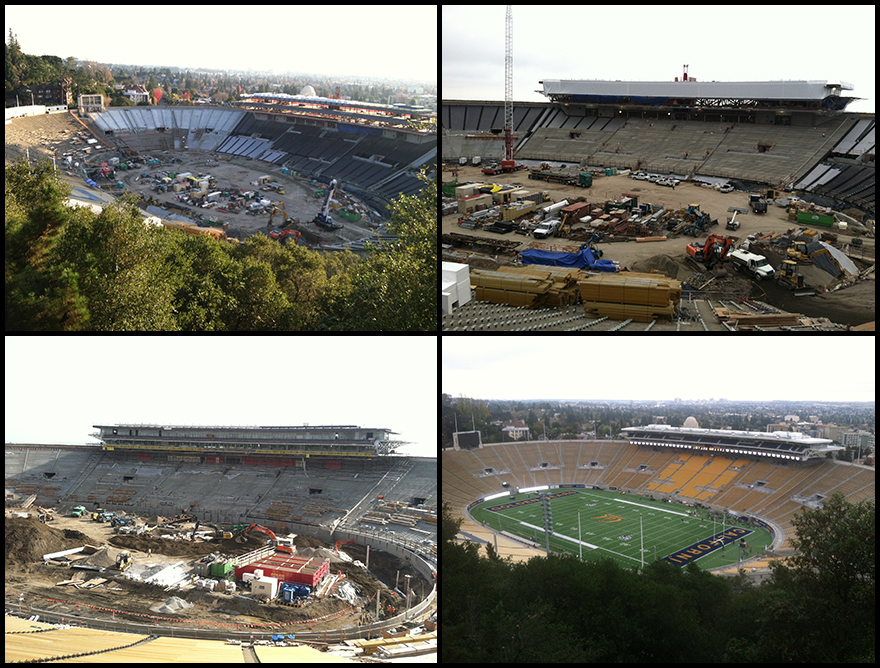 Memorial Stadium was designed, built and executed by the following parties: