Our inbox has seen an influx of concrete-based products and projects recently. Seems like the impending winter months has everyone looking to heavier materials. While concrete is no new design material (it's been seen used for everything from pens and office supplies to wayfinding signage, these designs have featured a fragile touch to an otherwise rough and tough material.

This planter is composed of wood and concrete in a somewhat fragile-looking design. The wood holds the concrete planter in a claw-like grip—while bringing an uncharacteristically warm touch to any room it inhabits. What began as an experiment to relocate cement away from construction sites and into the home has become an upscale product with big personality. Monterrey, Mexico-based design studio SHIFT combined their love for local production and the abundance of concrete (one of the Monterrey's main products) to create a more humanistic use for the material. "In an attempt to explore this material, we decided to pair it with a more organic, artisanal and friendly one," designer Daniela Valle says."We needed a material that could introduce a 'human factor' and not necessarily counter concrete's cold looks, but blend it to provide a unique feel as well as provide an artisanal and Latin-American vibe."

It was not the material itself so much as the stigma associated with concrete that proved to be a major obstacle for the project. "The main challenge stood in the common perception of concrete as a rough, industrial and unnatural substance as opposed to a friendly and uniquely aesthetic element," Daniela says. "Both materials have great character and presence, each in its own way. The difficulty was mixing them as they both fight for a stellar role, so rather than an even mixture of both; we used one to complement the other in a subtle way." Concrete's heavy appearance is toned down by the wood's soft grip. 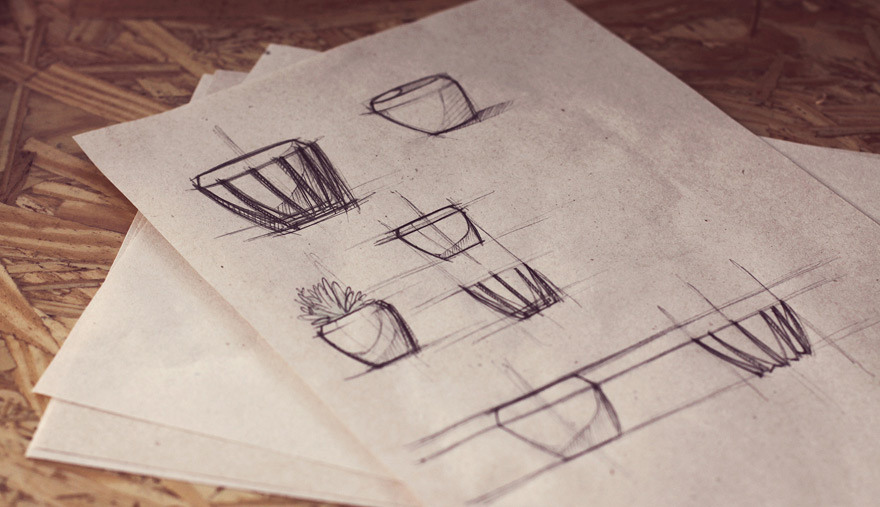 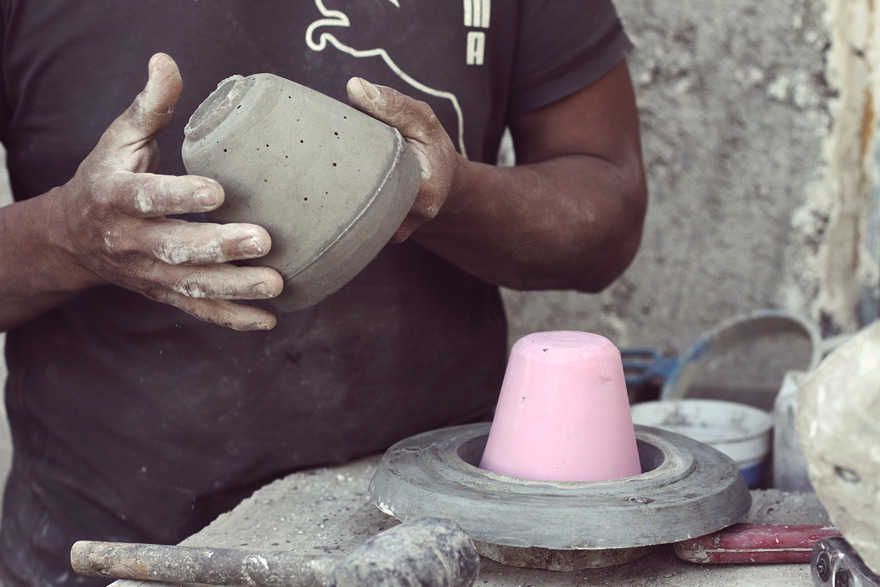 Of course, as with most designs, this one has an alternate, deeper meaning beyond its life as a chic table-topper. "We think La Morena also stands as an example of a simple way in which contrasting terms can coexist," Daniela says. "Through its materials and manufacturing process, this planter brings together technology and artistry, the industrial world and nature under a single honest design."

The design can be purchased at the Museum of Contemporary Art in Monterrey or directly from SHIFT. It will also be available soon here. 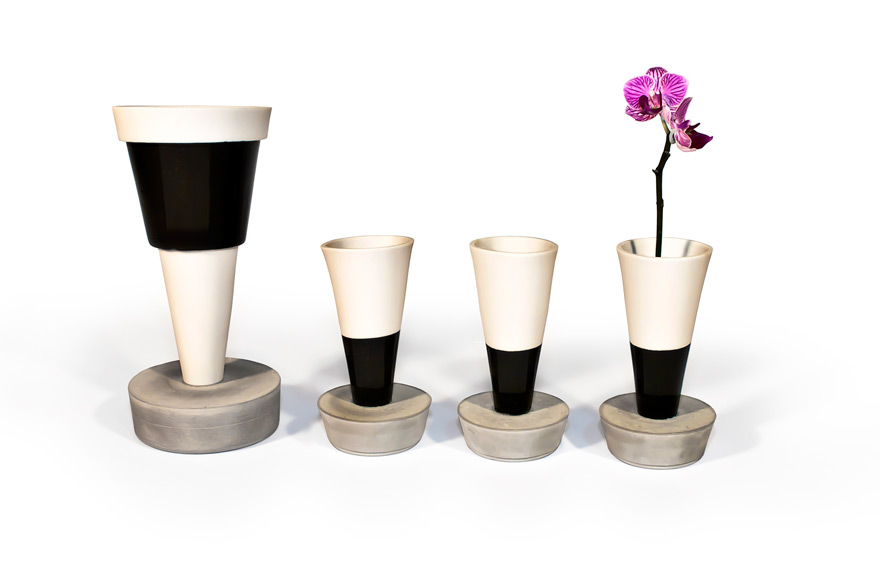 Belgium-based designers Marcial Ahsayane and Miriam Liebana are no strangers to concrete. "We were experimenting with porcelain for years in own projects such as the Dot Porcelain Table," Marcial says. "During all of this experimental work, we came to understand the limitations and possibilities of the porcelain, from a handmade or production way of view." And they've tried their hand at another hybrid project: a series of table-esque bud vases. 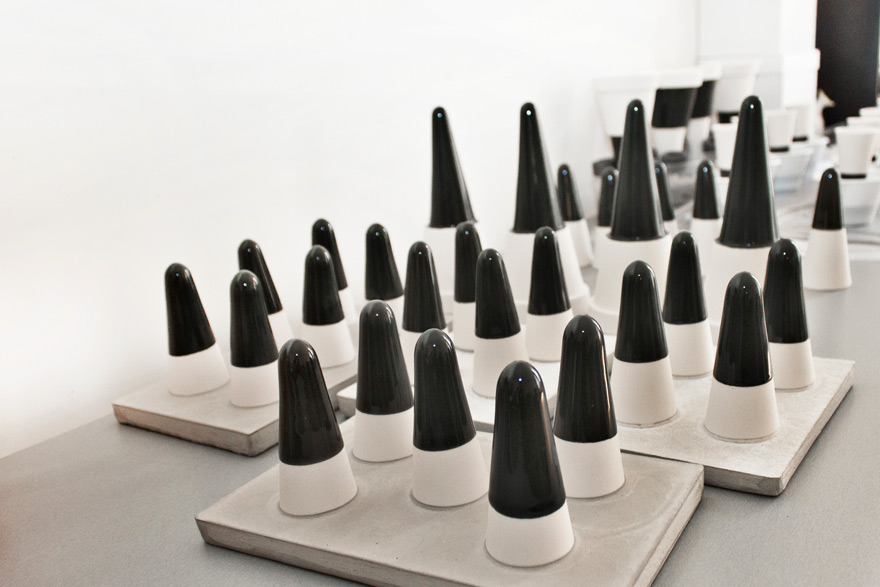 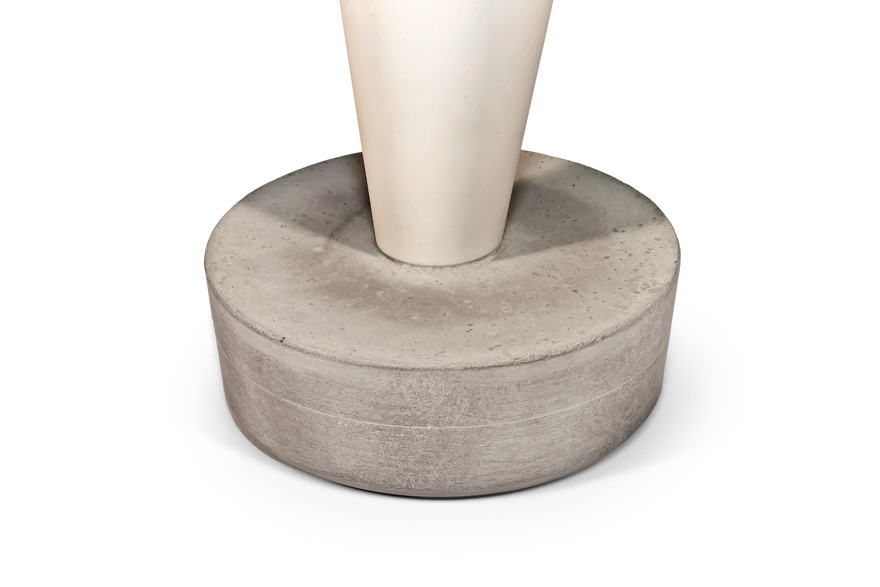 "We wanted to go one step further and design a full collection of different porcelain vases with just one only model and mould," Marcial says. "That material had to gather some properties, such as working as a perfect glue between the different vases, be rigid and as well be enough strong and structural. Concrete gives as all these physical properties." Both concrete and porcelain are water-based materials, but they respond completely different to the liquid and the environment's temperature. Porcelain is much more sensitive when it comes to being molded and dried. Concrete is low maintenance, only needing water and room temperature to solidify. Some may see this as an incompatible pairing, but Marciel explains why this was exactly what they were looking for:

That's the reason why we say that the water is the fixing element, because both need water as reactive. But, the most important point was the different range of contractions between them that made them perfectly suitable for our design target. While the delicate porcelain takes around a 15 or 20% of contraction, and some final deformities during the final drying timing, the concrete needs less manipulations and could wrap the deformities of the different porcelain pieces as one unique. 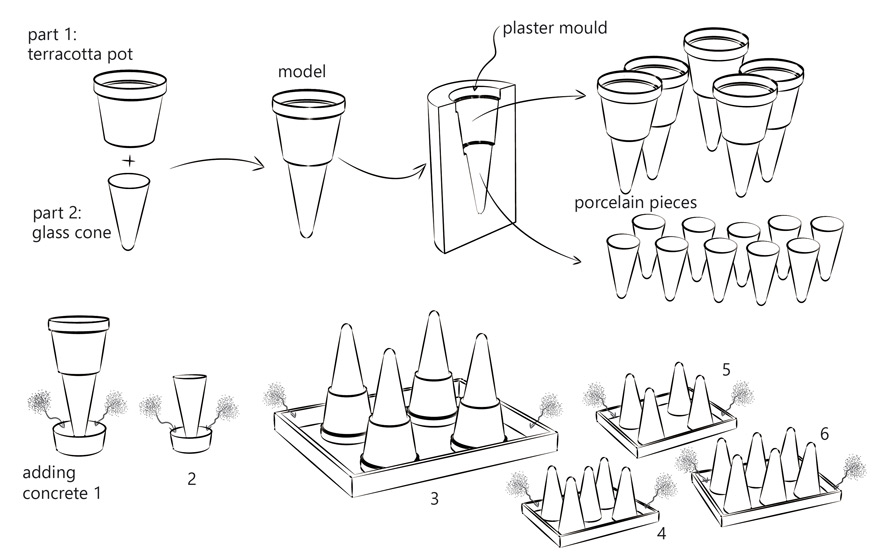 At press time, the vases were unfortunately not available for purchase. Eventually, they will be available in limited quantities.