Why You Must Attend Autodesk's CAVE Conference Next Year, Part 1 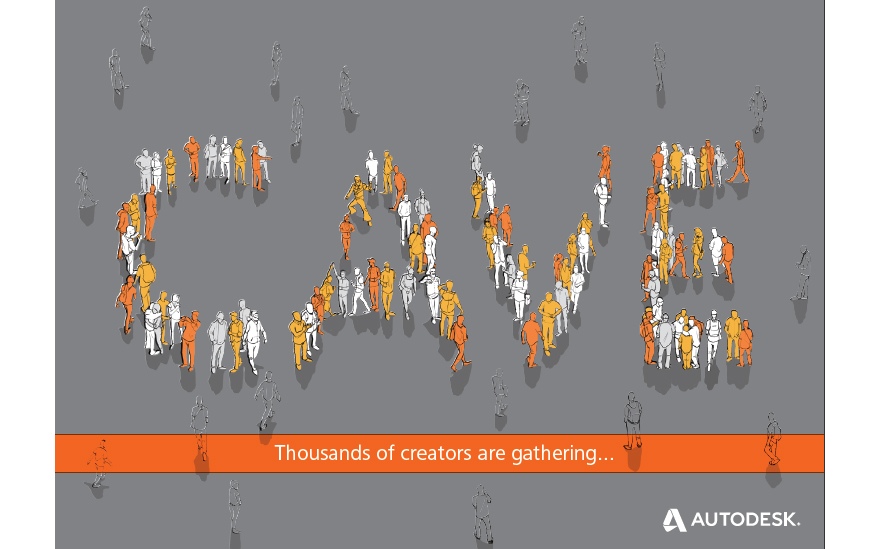 As we reported back in August, at this year's Autodesk University they decided to try something different, kicking the conference off with a sort of pre-conference focused on "creative talent from multiple disciplines." The idea behind this new Autodesk CAVE Conference was to assemble some of the finest artists, designers and storytellers around and throw them into the same event in the hopes of yielding an entertaining and informative cross pollination.

With such a nebulous description, I didn't know what to expect. But now, having attended, I'm here to tell you the event was a rousing success—everything it was billed to be and more—and that you must check it out next year!

The speaker list was an embarrassment of riches, and the packed schedule meant I'd only get to attend three sessions. Unable to decide which to attend first, my mind was quickly made up for me: I walked past an open door and heard the distinctly rapid-fire Bronx patter—of someone passionately discussing the movie Dumbo. Before I knew it my legs had brought me into the packed room where not a single seat was available.

The man presenting was Louis Gonzales, an animator and storyboard artist for Pixar. (If you don't know his name, you know his work: Monsters Inc., Finding Nemo, The Incredibles, et cetera.) Gonzales is both a gifted artist and a student of story, and his childlike enthusiasm for Dumbo's tale was coupled with a trenchant, technical analysis of how certain scenes were framed, and why they create particular kinds of emotional punch. Just as it began dawning on the audience that there was way more packed into Dumbo than the story of an elephant with big ears, Gonzales took us through a comprehensive slideshow of movies both classic and contemporary—his knowledge of film and film visuals is encyclopedic—showing us the insane level of construction and forethought that the creators had put into every frame. Before a single word is spoken by any of the characters, information is conveyed via lines, triangles, squares, circles, lighting, color.

After seeing script pages for Brave that Gonzales had covered in his red-ink notes, and him explaining what visual elements he knew he had to inject into particular scenes and why, I don't think I'll ever look at film or animation the same way again. I've been watching movies my entire life, and in the mere 55 minutes I saw Gonzales speak, he completely changed my perspective on visual presentation. And these were lessons anyone creating industrial design renderings could have drawn from. 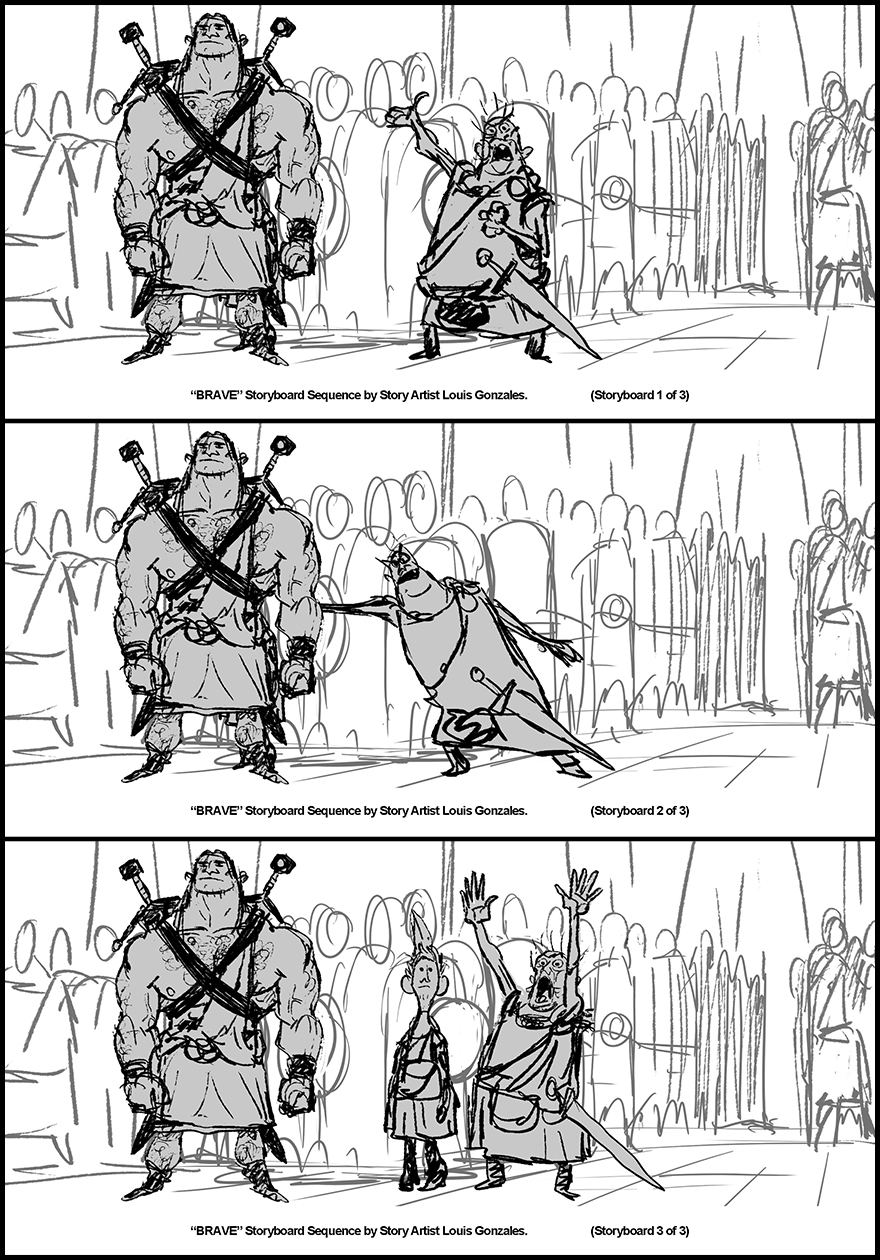 Next came the keynote presentation, where we were treated to both Angelo Sotira's story of how he started up DeviantArt followed by a chat from the wonderfully weird Neil Gaiman. Gaiman began his talk by explaining how the Chinese government had traditionally frowned upon science fiction, as that genre is often used to obliquely criticize institutional flaws, then recounted how they eventually relented and invited him to speak at their first-ever sci-fi convention. Intensely curious as to how this had happened, Gaiman tracked down the party official in charge of this action and asked him why sci-fi had suddenly been given the green light. "We [the Chinese] make everything," the Chinese official explained, referring to his country's manufacturing base, "but we don't invent anything." Science fiction, it had been decided by the party bosses, would be an effective way to stimulate the imaginations of Chinese youth, whom they hoped would subsequently provide original thought for the next generation of manufacturing. 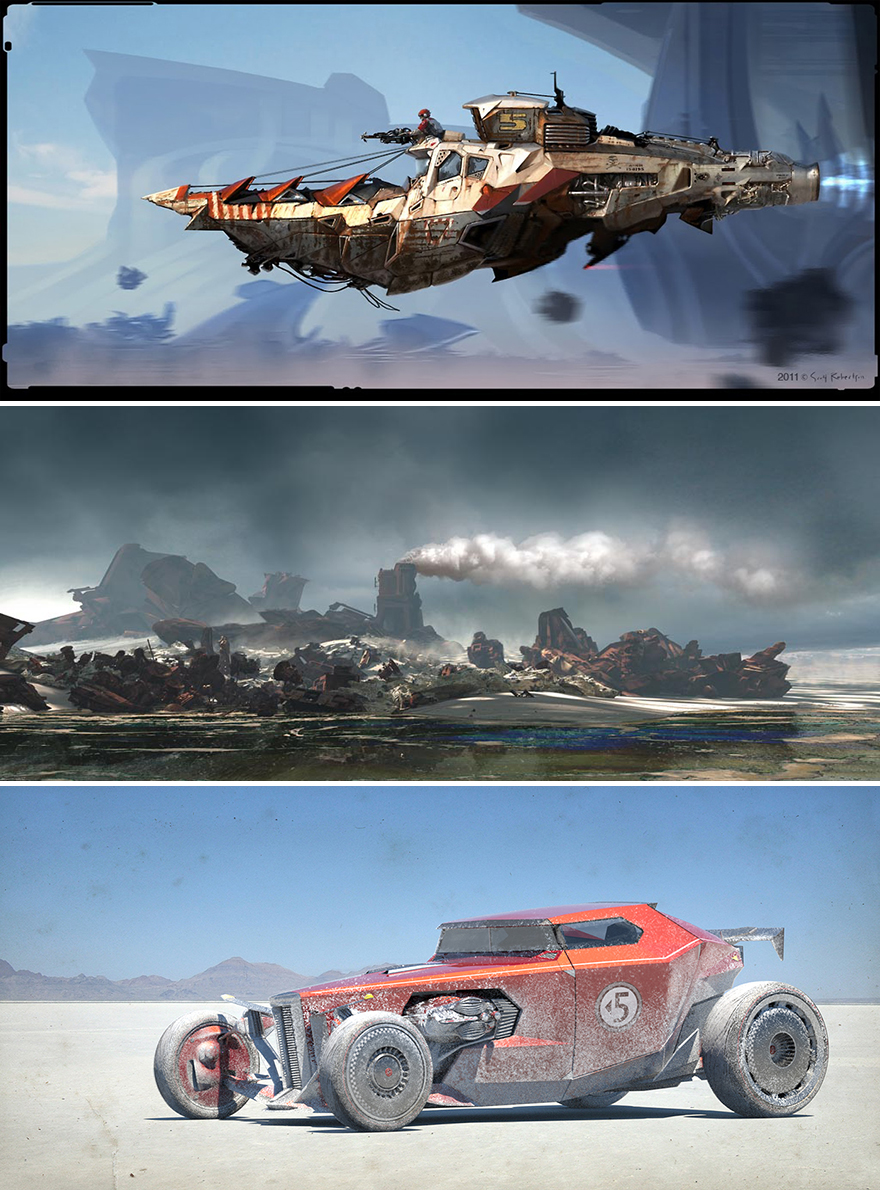 Next up, I absolutely had to sit in on rendering god Scott Robertson's presentation, entitled "Techniques to Aid Creative Process." In a little over an hour, Robertson ran down a ridiculously deep list of workflow tricks he's developed over the course of his 23-year career, ways to ideate and quickly develop fresh renderings. I don't call them "tricks" to be pejorative; I mean that Robertson has cleverly discovered multiple ways to use software and even cheap iPhone apps to produce in minutes what used to take weeks. If he had revealed just three of these tricks it would have been worth the price of admission. Instead, Robertson gave details of twenty.

Deciding on the third session was a struggle: I definitely wanted to see industrial designer and concept artist Daniel Simon discuss his technique of mining classic designs to create futuristic concept vehicles, but as we'd interviewed him here, I instead opted to sit in on Skylar Tibbits' talk on "4D Manufacturing." It was similar to his most recent TED Talk on self-assembling structures, with the added bonus that being there meant we could ask questions of him; I asked him if he had any plans to venture into experimentation with textiles, as what I'd really like is differently-colored socks that can automatically find their partners in the dryer, link up and fold themselves into a pair. (Short answer: No.) 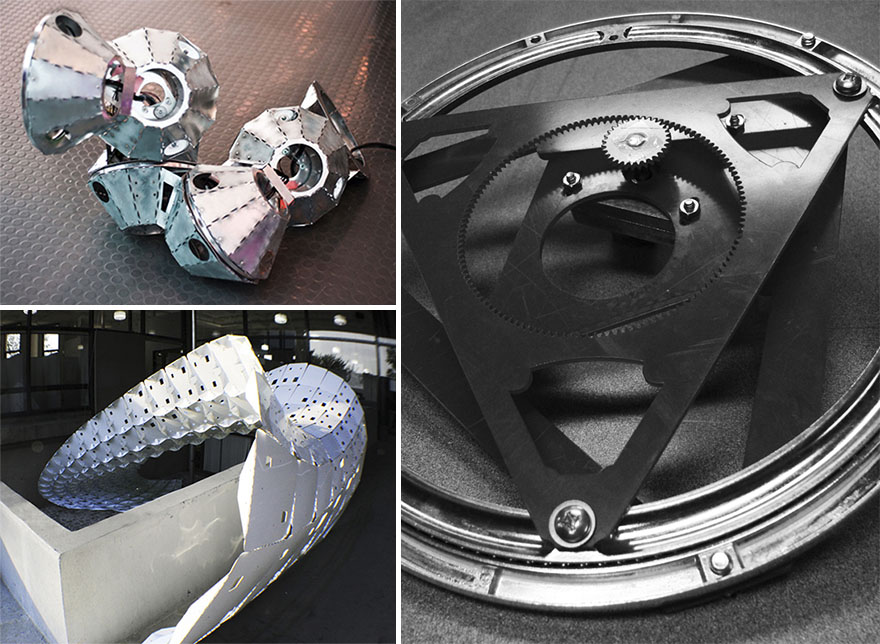 Speaking of TED Talks, after all of the fantastic presentations I saw, I asked conference organizer Chris Cheung why on Earth they were not recording these and posting them to the web; the information being conferred seemed much too valuable to remain fleeting one-hour events that only a handful of people get to see and benefit from. I'd much rather that you, our readers, get to see video of the presentations from Gonzales, Robertson and Tibbits than read about my impressions of them.

Alas, the answer has to do with intellectual property issues. A speaker may not mind "giving away the store" to a room filled with dozens or hundreds of people, but putting certain information online for all to access is a different matter entirely. Without getting too specific, let's say that a particular designer gets paid very well to perform specific tasks that have a traditional time/cost formula attached to them. And let's say that that designer discovers a way to drastically reduce the time to perform those tasks (which is really what Autodesk is all about), but the pay rate remains the same. This means he or she can make more money in less time, and you can see why a generous someone would be willing to share that information with fellow designers who could enjoy the same benefits, but might not be so inclined to have his clients privy to the specifics of his workflow. And that is why you should attend CAVE next year, to get inside of those rooms!

But if you're not sold yet, stay tuned for the second half of our coverage of the first annual CAVE Conference...

Why You Must Attend Autodesk's CAVE Conference Next Year, Part 1