Bec Brittain on Moving From Philosophy to Lighting Design, Drawing Inspiration From Her Grandmother, and Why She Likes a Cluttered Workspace 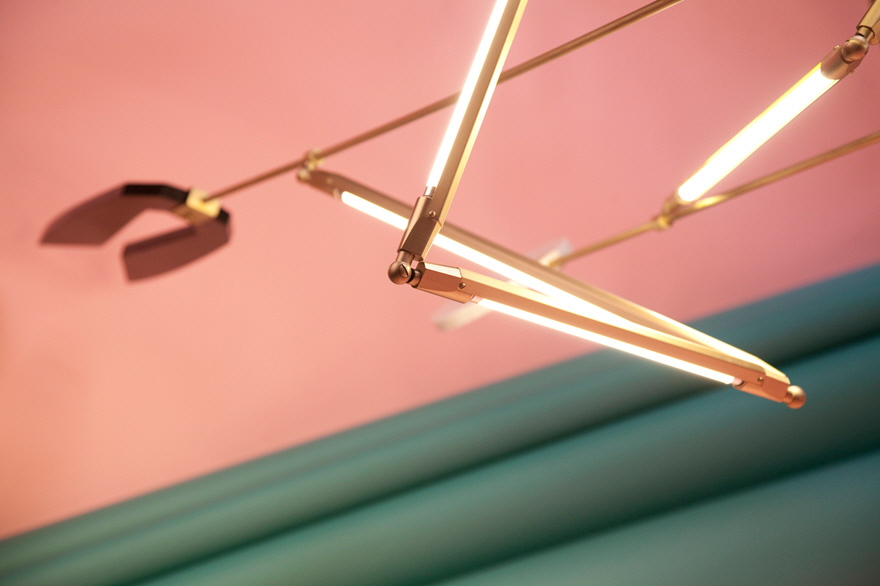 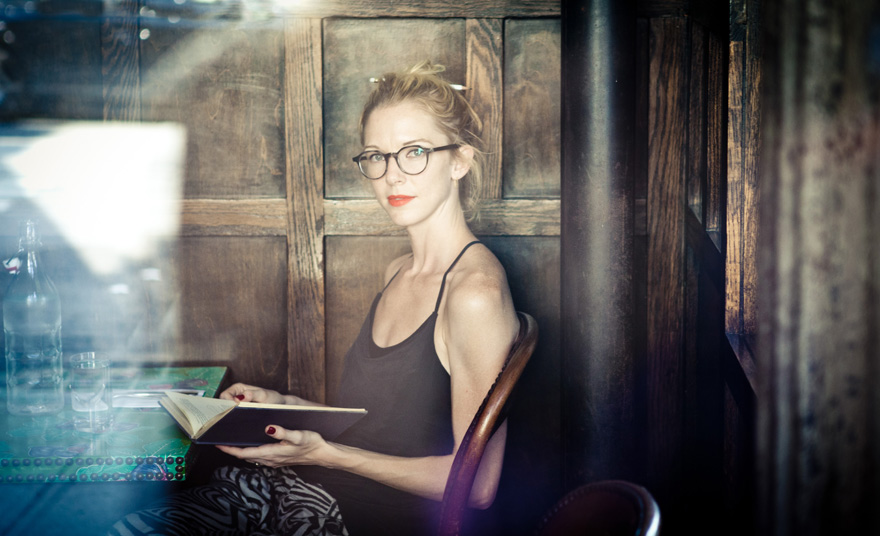 This is the latest installment of our Core77 Questionnaire. Previously, we talked to the Finnish designer Harri Koskinen.

Current projects: Our latest project is the Twin Vise, which is a new iteration of a light that launched last spring. It's these two hand-blown glass globes that are held in place with a metal infrastructure. The "twin" bit is that, in turning it from one globe to two, it's actually sharing an infrastructure and it looks like a twinning crystal or a splitting cell. I'm very excited about it.

Mission: To make things that people would want to keep around for a while. I am very influenced in how I approach objects by my grandmother. She collected a lot of things, and it didn't quite matter whether they were contemporary or older; she just put them all together in her house and they looked amazing. I think about how happy I am now to have a few of her things, and I'm very aware of how old these objects are but in what good condition they're in. So I want to create things that are well made enough that they could be passed down to grandchildren, and that are timeless enough that a grandchild would even want them. 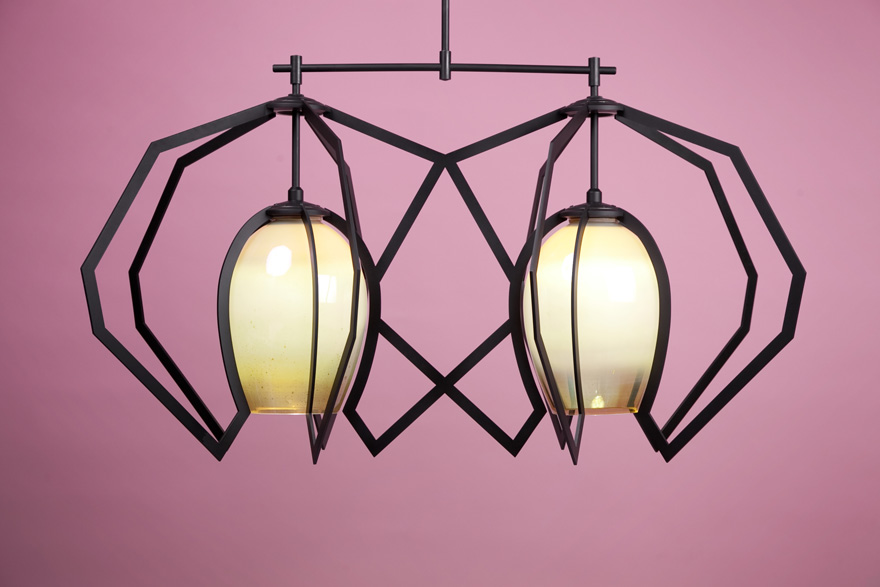 When did you decide that you wanted to be a designer? I came from a family of makers, and I always knew I was going to be some sort of maker. It went from maybe being a fashion designer to maybe being a product designer to architecture—there was a winding road. It was when I started working in metal for a hardware company that I realized that I really love metal, and that was a guiding force.

Also, working at Lindey Adelman's was really helpful, to see her business model and experience making things to order. Making small things and being able to concentrate on them—essentially, being able to do product design while side-stepping the mass-production element of it—that's what led me to doing this, to doing small production in metal and to dealing with light.

Education: I started out at Parsons, but I left there after a couple of years because it wasn't a good fit. Instead I got a philosophy degree at NYU, and then I got an architecture degree at the Architectural Association in London.

First design job: Well, I worked for an interior designer all through my undergrad years. But my first graduated, adult job was working for the architecture firm Work AC as a project designer. I was on a project for Anthropologie; they wanted a new, crazy concept and were trying to refresh the brand, so that was my project for a year.

Who is your design hero? I'm going to go with the Dutch artist Madelon Vriesendrop. She's just really great. She doesn't take it all too seriously, but she's a smart cookie. 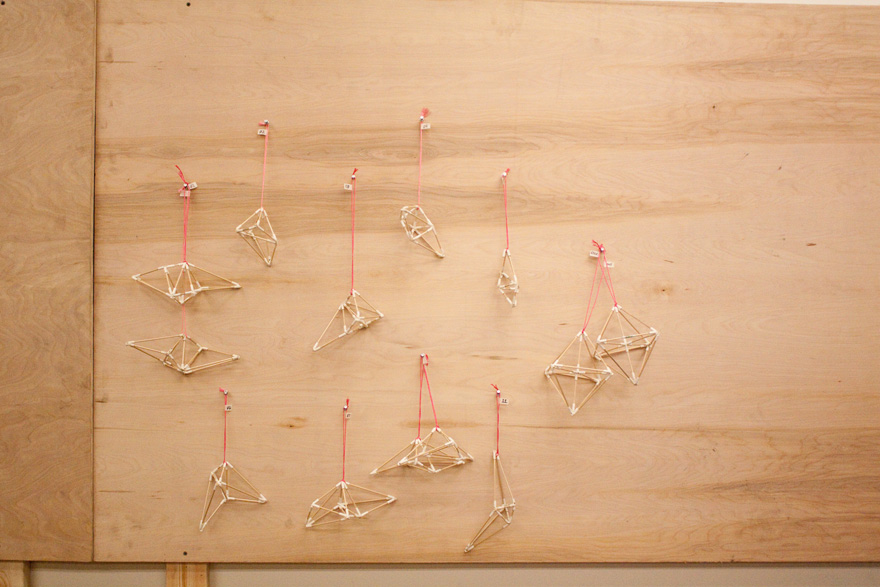 Describe your workspace: I would say it's pleasantly cluttered. It has just enough things going on that you feel like you can start a new project. I find that if a workspace is too clean, it feels precious.

Other than the computer, what is your most important tool? I'm going to give you two. One is paper, because all the time when I'm working out forms, I will print flat nets of them and then make paper models and mockups to get a sense of scale. So there are lots of little folded paper shapes kicking around. The other is this system of little wooden dowels that I used to make sketch models for the SHY lights. They're just a lifesaver.

What is the best part of your job? Not only do I get to spend my time but I get to take advantage of other people's time, every day, in service of realizing ideas in my head. I think that's quite a luxury, to be able to take things out of the realm of the imaginary and make them real. I've been feeling very grateful for that lately.

What is the worst part of your job? Scheduling. Just the reality of wanting to keep people happy and deliver on time. It's a constant game of trying to anticipate problems and then come up with plan B, C, and D to get things done on time. 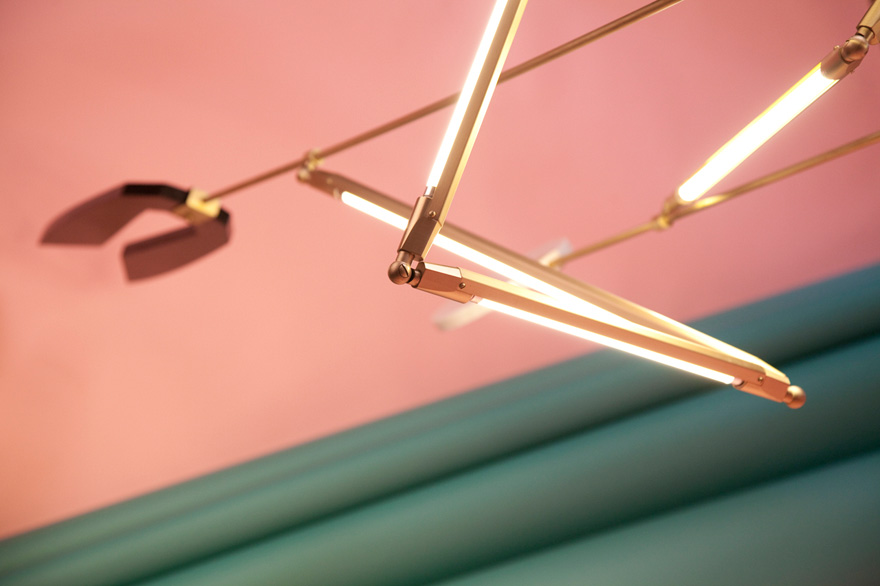 What time do you get up and go to bed? That's been difficult lately because I've had insomnia. So lately I go to bed at about 3:30 a.m. and wake up at maybe 9:30 in the morning. I'd rather have a normal schedule.

How do you procrastinate? By shopping for tools online. It doesn't quite feel like procrastination. Buying tools and supplies for the studio kind of feels like working, but we all know it's not exactly what I need to be doing.

What is your favorite productivity tip or trick? I think it's really just having a good memory. I'm very happy that I have a good memory. I have to make many fewer lists.

What is the most important quality in a designer? To be a good problem-solver, and a flexible problem-solver. Because, as I mentioned, plan A almost never happens. To still get the desired results, even if it turns into plan C, requires a lot of flexibility.

What is the most widespread misunderstanding about design or designers? I sometimes feel, because I didn't have a proper product-design education, that I'm kind of an outsider myself. So I'm not really sure about a big misconception. There are so many types of designers that it's hard to generalize. I just carve out my own niche and care about what I care about.

What is your most prized design possession? Does saying that if SolidWorks didn't exist my life would be far less lovely count? It's not really a possession, but SolidWorks is a general savior.

What is exciting you in design right now? I got really excited to see the designers Chen Chen and Kai Williams do these rugs with Tai Ping Carpets. They blew up a small-object project into carpets, and I think they're really exciting.

If you could redesign anything, what would you choose? Air travel. There's got to be a better way.

What do you hope to be doing in ten years? I hope to be doing kind of the same thing. I'm really happy with what I'm doing. The improvement that I would hope for in ten years is that I can afford a little bit more free time to spend actually thinking in a slow way. Right now things are very busy, which is awesome. So that would be the only change, to have a bit of slow time to just play.

Lastly, who's more fun to have a drink with: architects, industrial designers, or graphic designers? Whoa. I'm going to say industrial designers. This was one of the considerations when I was reviewing this life switch and decided to definitely do lighting. What could be a painful networking night was just hanging out with people I like. So I'm going to go with the home team on this one.

Bec Brittain on Moving From Philosophy to Lighting Design, Drawing Inspiration From Her Grandmother, and Why She Likes a Cluttered Workspace