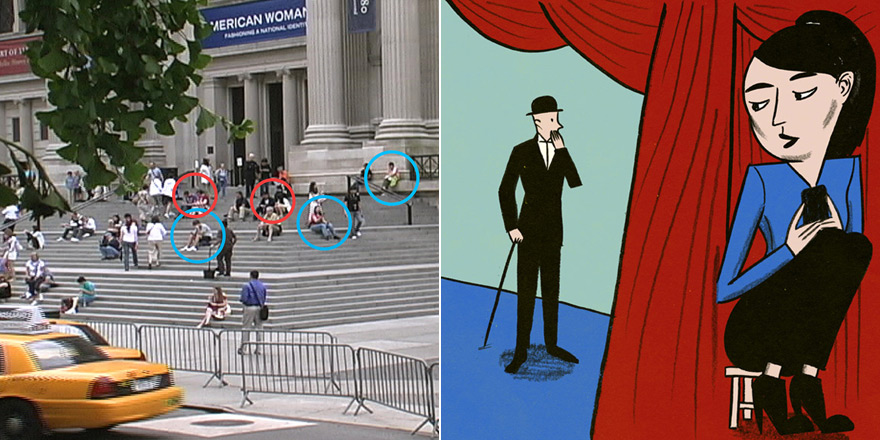 "This One Weird Trick" and "[Number] [Superlative] You Must See!" notwithstanding, "Technology Is Making Us [negative attribute]er" is among those sign-of-the-times headlines that reliably attracts fingertips and the eyeballs connected to them, and it remains an ever-relevant (and at times evergreen) topic du siècle. (Here's where I recommend Luke O'Neil's recent polemic on this disturbing trend in clickbaiting before diving right in.) Even as the pendulum—more a katamari than a wrecking ball—continues to swing between the poles of pro- and anti-technology, so too have new developments in mobile, the Internet of Things and overarching privacy concerns added a proverbial Z-axis to the playing field.

Professor Keith Hampton of Rutgers is, by the New York Times' account, "neither a reactionary about technology, innately skeptical of the new, nor a utopian, eager to trumpet every invention as revolutionary. He is instead a sanguine optimist—a position he says is backed up by his research." Along with a cadre of grad students, he's spent the past several years working on what might be described as a shot-for-shot remake of an urban investigation from nearly half a century prior. Hampton is revisiting William Whyte's seminal Street Life Project, in which he filmed public spaces in a first-of-its-kind study of urban planning by observing user behavior.

Thus, he's taking up the cause—gathering empirical data in the interest of a more human-centric approach to urbanism—with a specific focus on mobile technology. As its title suggests, the Magazine feature—a worthwhile read for design researchers and city-dwellers alike—presents Hampton's finding that "Technology Is Not Driving Us Apart After All."

Fellow armchair sociologists who are pressed for time at the moment—I, too, have feeds to scroll through and e-mails to delete—might be interested in a brief post by Columbia's Tim Wu, his first contribution to the New Yorker's tech blog. He proposes, in so many words, a kind of Turing test for a time traveller as a means of determining whether technology is making us smarter or dumber. He concludes that "how you answer the question of whether we are getting smarter depends on how you classify 'we'"—whether you regard technology as an extension of the mind or as an external factor of purely incidental import.

Yet the most fascinating thing that Hampton found (spoiler alert, sort of) is the fact that more women are out and about in these spaces in New York, Boston and Philadelphia. "Who would've thought that, in America, 30 years ago, women were not in public the same way they are now? We don't think about that."