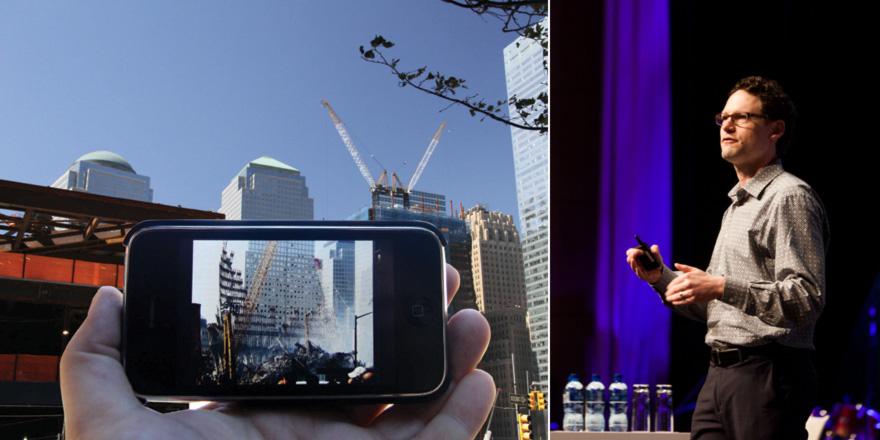 The fact that Jake Barton's work has been woefully absent from these pages—just a couple of mentions in 2008 and a 2011 Core77 Design Awards Notable (and the BIG Heart)—simply means that his presentation at the 2014 Design Indaba Conference is a felicitous occasion to cover the latest from his media design practice, Local Projects. 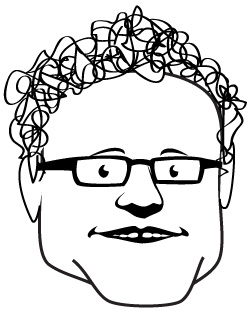 Barton is a natural presenter—no surprise, given his background in theater—who speaks with a confident, clear cadence on and off the stage. He worked as an exhibition designer prior to attending NYU ITP, where he has taught since he graduated in 2003, and has spent the past decade or so establishing Local Projects (which he founded in 2002) as the premier shop of its kind. While they're billed as a "media design firm for museums and public spaces, Local Projects makes cutting-edge technology accessible and meaningful to a broad audience. Specifically, Barton and his team of designers, technologists, filmmakers and developers create media-enabled experiences at the intersection of design and storytelling—from rich oral histories to simple, intuitive interactions.

The site- and exhibition-specific multimedia elements that the National Design Award-winning firm has designed go far beyond the ho-hum audio guide, offering glimpses of the potential of augmented reality, where the content is seamlessly integrated into the (largely screen-based) media. Most of us have witnessed (or at least heard an account of) a young child attempting to 'swipe' or otherwise manipulate a television as though it is a touchscreen; with Local Projects' displays for the Cleveland Museum of Art, you actually can.

Citing the Agile methodology popular in Silicon Valley, Barton champions what might be called an 'over-prototyping' process, in which Local Projects will develop upwards of a dozen concepts in full—putting the production work up front, many times over—in order to experience and interact with them in time and space. Barton admits that it's a luxury to explore many ideas at such depth, but the time- and labor-intensive approach is all in service of achieving the best results possible. And just as Tony Fadell famously saved the best iPod concept for last, so too does Barton strategically present favored prototypes to his clients. (Barton elaborates on Agile development in this recent AIGA interview; in the Design Indaba talk, he contrasted it with the 'Waterfall' approach. Between the AIGA interview and the full Lynda course you can glean a fair share of his Design Indaba presentation.)

And while Barton had covered a few of the same projects in his TED Talk from last year—including the 9/11 Memorial, which is scheduled to open next month—he saw fit to include a more recent grant-supported collaboration with the New York Hall of Science. As seen in the video below, Local Projects developed a series of basic physics lessons that start with playground activities, such that the students can work with a data set that they've generated through play.

Each of these projects represents Barton's goals of 'magic,' 'innovation with a point,' and 'experiential learning,' but from a broader perspective, his forward-looking design practice is like a filter for presenting the best and most refined products of interaction design, those Kinect+processing hacks that originate in universities and hackerspaces alike with just a slim chance of reaching an audience of millions. It takes the likes of Local Projects to translate those agglomerations of sensors and algorithms into interactive environments, distilling the essence of new and emerging technologies into meaningful experiences.

Keep an eye on Design Indaba TV for a video of Barton's presentation in full—as well as all of the talks from the 2014 Conference—over the next several months.