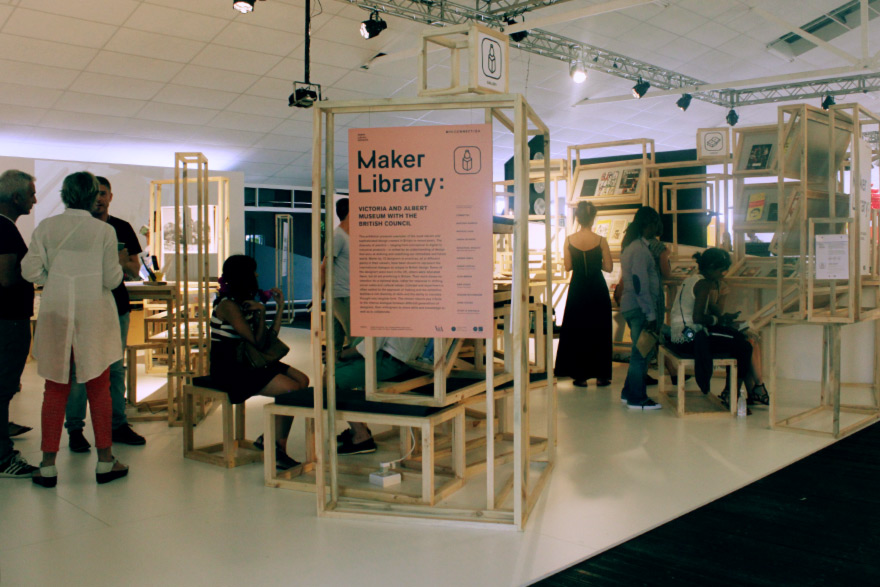 While much of the Northern Hemisphere clenched its collective teeth through yet another week of bitter cold, the end of February was a rather multifaceted celebration of art and design in South Africa when Design Indaba, World Design Capital 2014 events, the Cape Town Art Fair, and the Guild Design Fair converged in Cape Town (surely not by coincidence, as 2014 also marks the 20th anniversary of the nation's independence). The latter event was organized by the same folks behind Southern Guild, who made a strong showing at the very first Collective Design Fair last May, and like the NYC event, Guild skewed toward the Design Miami crowd. Not that there's anything wrong with that—I wish I'd had more time to explore the eclectic offerings on view (not that the multi-building venue was that big anyhow). 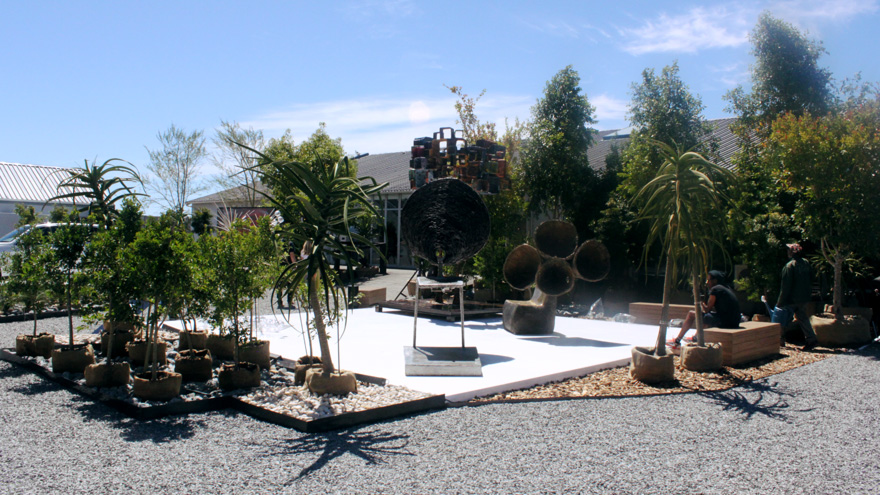 Nacho Carbonell exhibition in the courtyard

Instead, I chanced upon an exhibitor whose mission is precisely to engage the Cape Town design community and public at large in a meaningful way. I recognized Daniel Charny immediately—I posted a video of his talk from Design Indaba 2013 just a few days prior—and he proudly gave me a tour of the Maker Library at Guild.

As its name suggests, it's a variation on a makerspace, a community hub that serves as a library-like resource for designers even as it transcends the scope of a mere repository of information. Rather, the Maker Library is designed to be a workshop and studio as much as it is a gallery, and the 'Librarian in Residence'—Heath Nash, in the case of Guild—is not only a knowledgeable administrator but a well-connected member of the local design community. 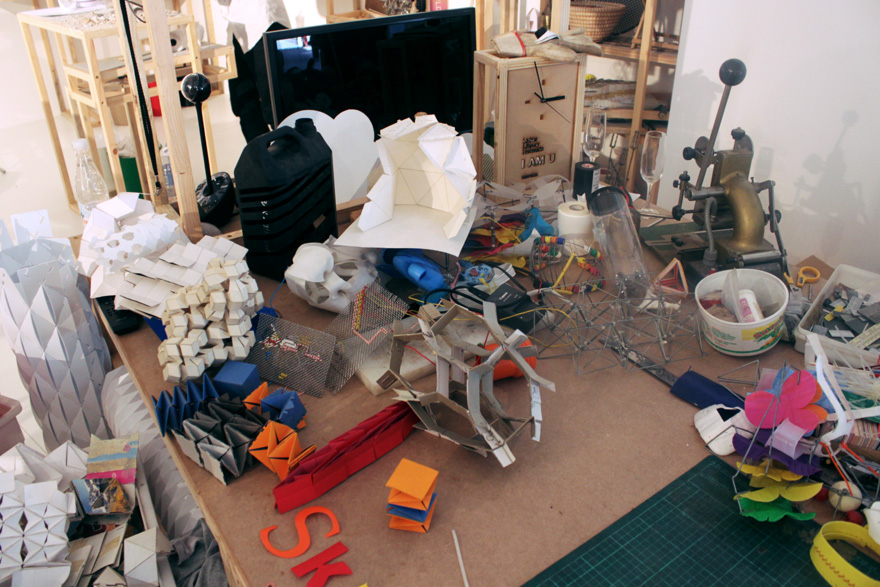 The Maker Library initiative finds its origins in the British Council, an organization is tasked with "educational opportunities and cultural relations" around the world. This year sees a focus on South Africa: As 2014 sees the nation enter its second decade of independence, so too is the first generation of "born-frees" on the cusp of adulthood, and an arts program called Connect ZA (sometimes styled as "Connect/ZA"; pronounced "Connect Zed-A," per the local flavor) is intended to meet them halfway.

Although the exhibition closed on March 9 along with the rest of the Guild Design Fair, the British Council / ConnectZA have posted an open call for other Maker Libraries in South Africa; applications are due on April 4. Here is a selection of the work from the Maker Library at Guild, which Charny organized with V&A curator Jana Scholze: 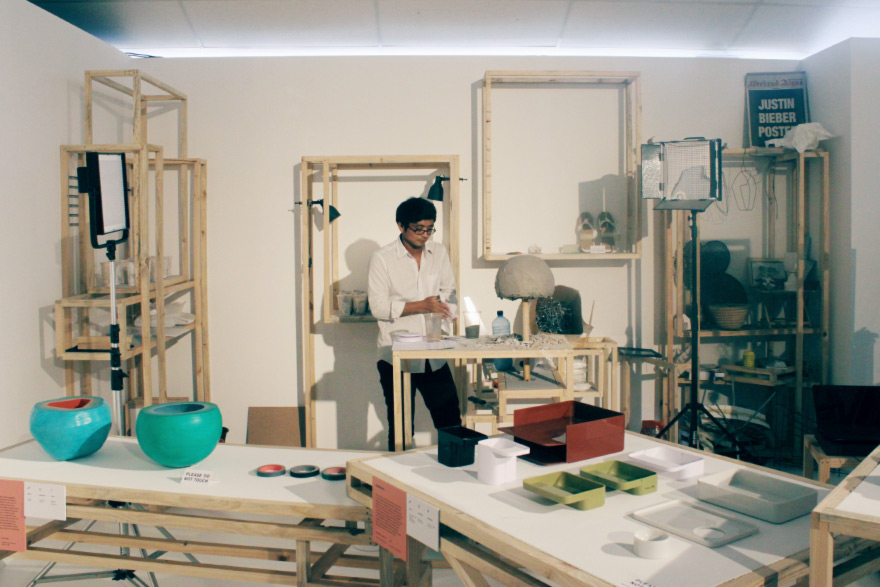 Tetsuo Mukai of Study'O Portable occupied a corner of their exhibition space as a video team prepared to film a live making demonstration. 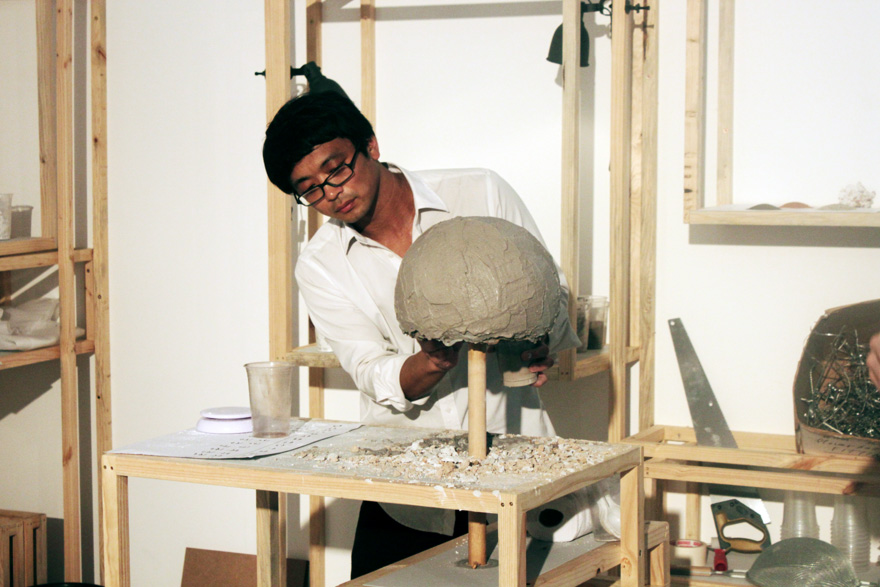 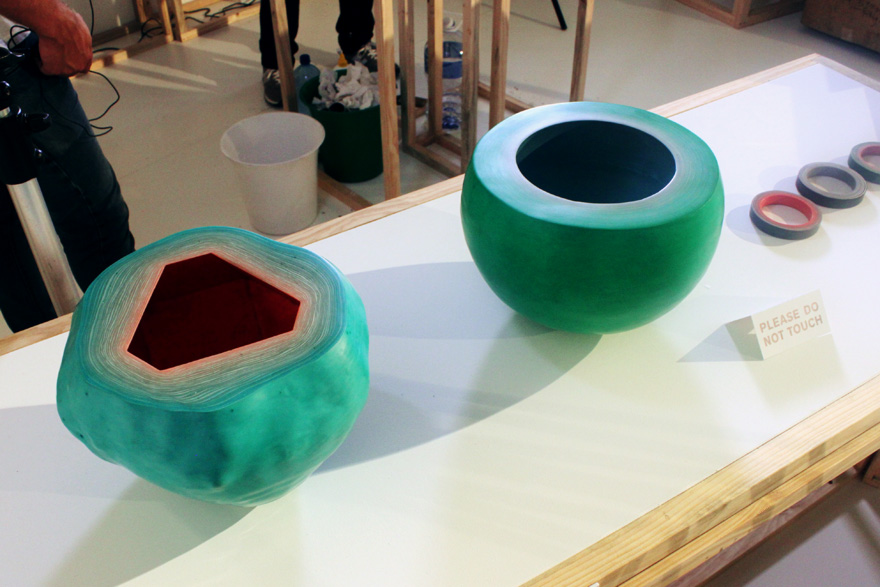 Hans Stofer likens design to "writing short stories," since both pursuits require the "ability and skill to fit a fully rigged ship into a tight-necked bottle." The fact that he explores the materiality of books as an extension of narrative is certainly appropriate in the Maker Library setting, where the table-height vitrine evokes a rare book case. 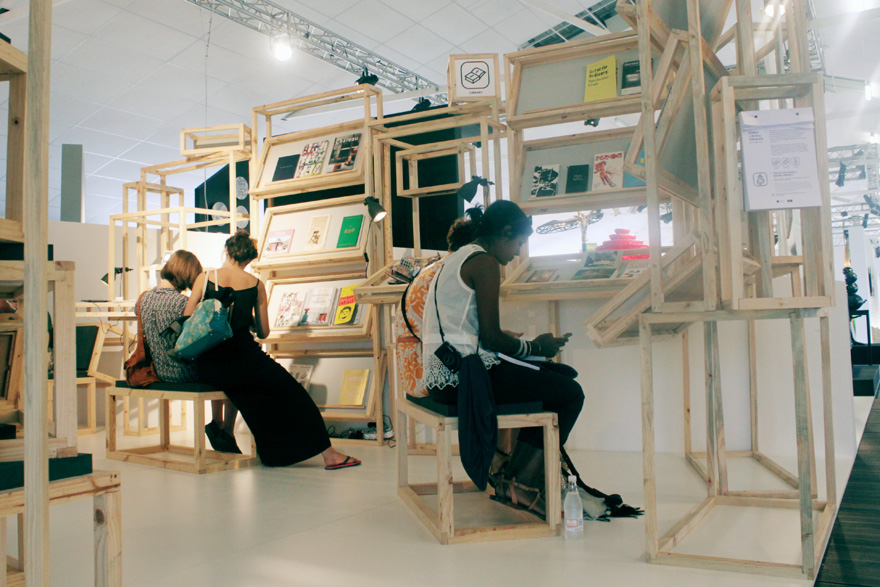 Indeed, the furniture itself is intended to be 'open source': tasked with creating a thoughtfully conceived yet easily reproducible space, designer Alon Meron came up with furniture plans that can be adapted for each space and happening. 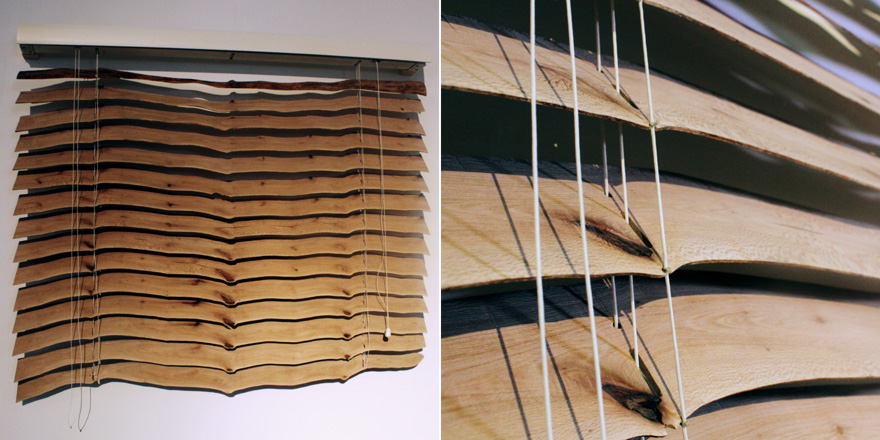 Meron also designed this winsome "Timber Shade" back in 2011. 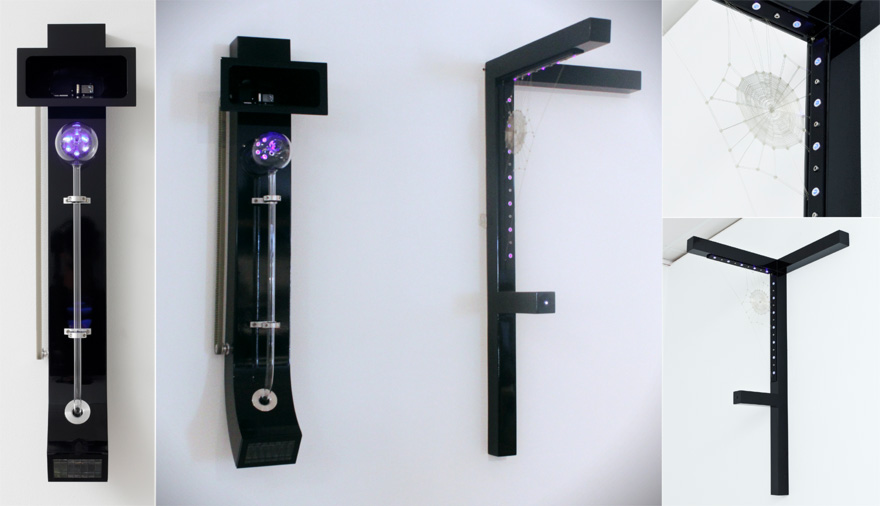 The beautifully crafted blinds were next to one of the headier works in the exhibition: Auger Loizeau's "Sublime Gadgets" are essentially non-anthropomorphic robots. "Bionic Requiem" (at left) is essentially an electric flytrap that will generate a tune once it has 'consumed' enough energy from its prey; the "God Machine" is a kind of mini electric fence (again for killing flies) that is controlled by remote. 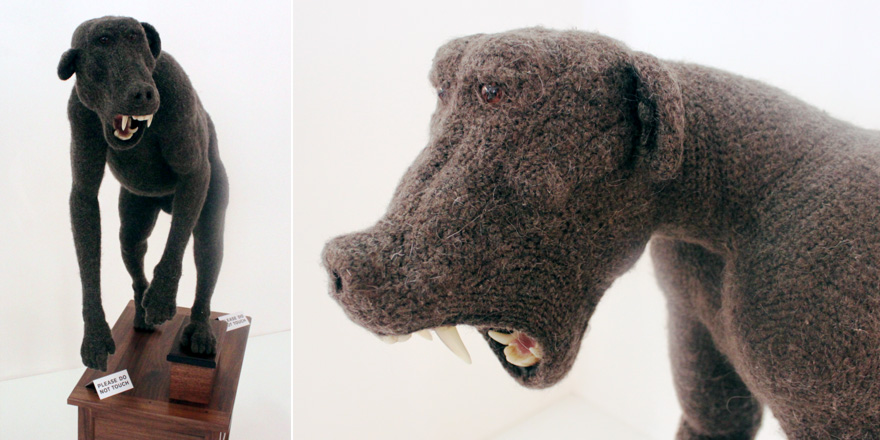 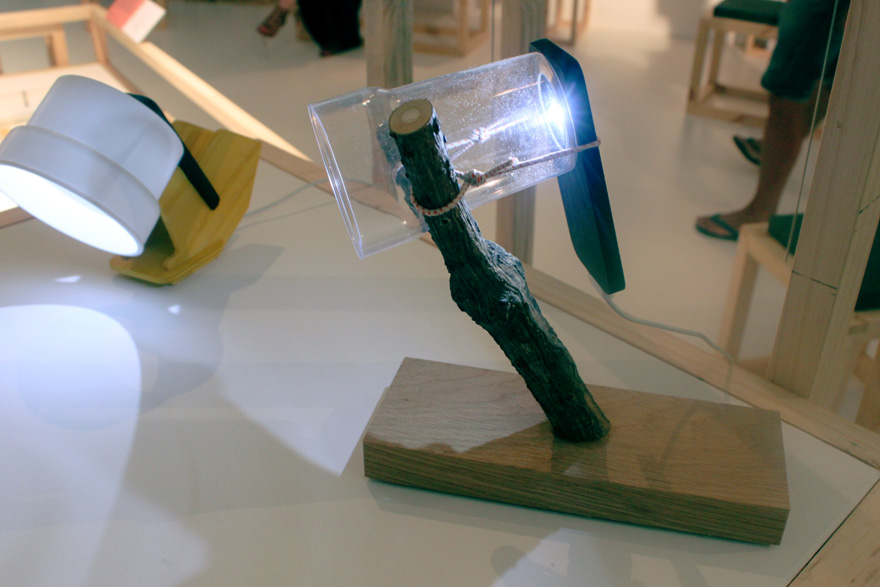 The Smartlight" series by Raw Edges (a.k.a. Yael Mer & Shay Alkalya) was inspired by the fact that many of us sleep with our phones within arms' reach; the "Sling" caught my eye. 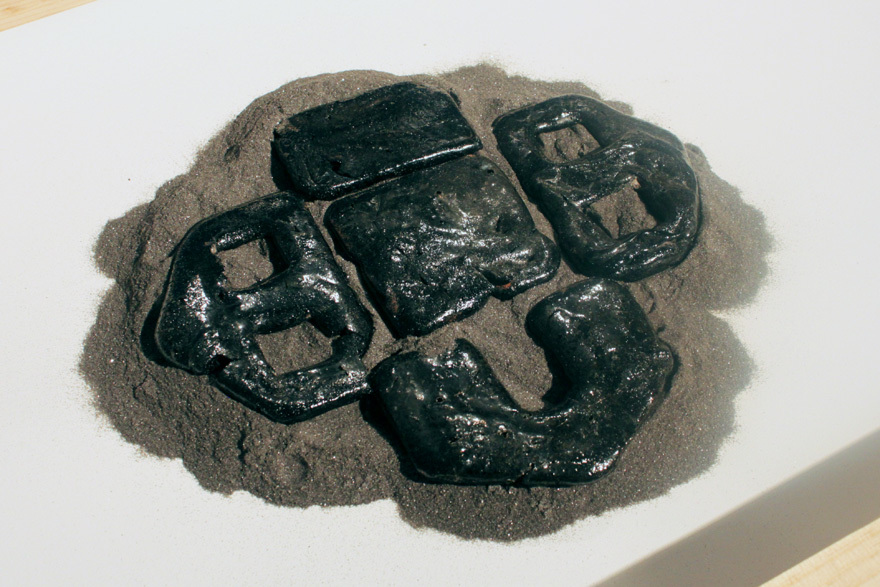 Lastly, one of the more interesting projects had debuted during London Design Festival last year but managed to impress the likes of Thomas Heatherwick (who was also visiting his sometime collaborator Charny while I was there). Kieren Jones's project was an investigation into using lava as a building material, speculating as to whether it would be possible to literally recast a destructive force of nature as a constructive one, by guiding lava flow from volcanic eruptions into molds for bricks.