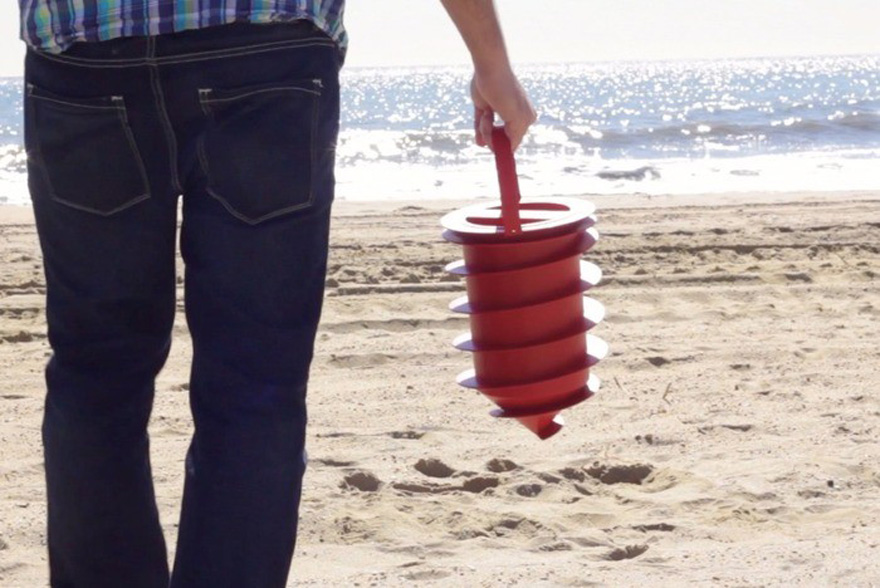 A man and his bucket

Sometimes when you love two things very much it's easy to delude yourself into imagining an ideal pairing where you can enjoy them at the same time. This can be guiltily true for burger toppings (you're sticking okra where?), close friends (those arranged dates are only a favor to you), and very often design features. There is a dangerous zone of thinking that wantonly combines Feature A and Feature B, with slight regard for whether they truly do a better job together. Snuggies. Meat thermometer spatulas. We have all borne witness. Sometimes though... those weird pairings are pretty good.

Today's test case is the Beach Vault, the screwy red security bin for your beach trips. While it sounds As-Seen-On-TVesque, this project serves a few real problems experienced by even casual beachgoers. First and foremost, the beach wants to mess up your gear. Wallets and keys love to scatter themselves, and your phone hates you for even thinking about wet, sandy, rambunctious environments. Meanwhile sunscreen, books and spare towels quickly become clutter. Second, your valuables do look awfully inviting tucked obviously under the corner of your blanket once you finally cave and take a quick dip. Third, billowing beach towels are a sand-flinging drag, and while you might visit the beach for recreation, tracking down your wet butt-printed blanket through other people's picnics is a bad look.

The Beach Vault looks like a whimsical way to solve at least a couple of those. It is a hollow plastic screw with a sealed lid, looking an awful lot like a kid's sand toy. Use the screw to pin down the matching towel which has a built in pillow pocket, keeping your secret valuables safe. Initial subtlety may not be that high - you're screwing a large red object into the ground and then carefully tucking a large blanket around it - but the concept is pretty sound. Keep your delicates, valuables and water-pervious items tucked out of sight, while your towel stays put. Finally, a money belt you can use while nearly naked!

While it won't make being surrounded by other people's screaming sunburned children any more fun, it will at least let you go to the bathroom without feeling like a Bedouin. The Beach Vault is brought to Kickstarter by a plucky New Jersey family whose husband-wife team probably knows 100 times more about beach-going than I do in Portland. They've already got their prototype dialed and are offering a staggering array of primary colors if they hit their immense reach goal. Think about what you really think about while you're at the sea shore, and give it a gander.

Reach for the stars. Reach for a Beach Vault.