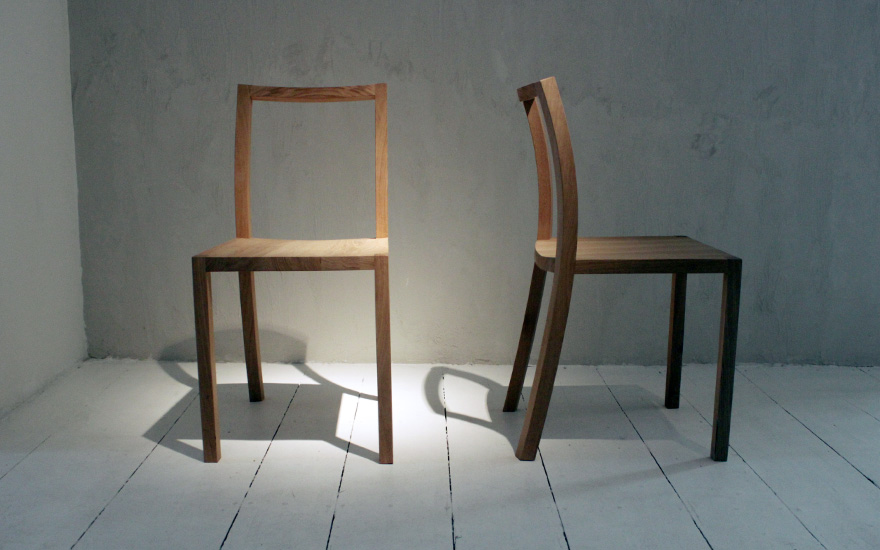 The chair is often cast as a pincushion, so to speak, for critiquing the self-serving rigmarole of design festivals: It is essentially the basic unit of a furniture fair, and for all of the marketing muscle and star power behind the purportedly major product launches, the chair remains a close second to the wheel when it comes to reinvention.

Yet it endures as a mainstay of our homes and our lives—unlike, say, the objets du jour axes and bows-and-arrows of dubious utility for their target market of hip citydwellers—and if it is a byword for furniture fatigue, it is precisely because it symbolizes 'design' writ large. To extend the trope, a chair could even serve as the physical manifestation of a designer's mission statement.

This may well be the case for Keiji Takeuchi, who debuted an unassuming dining chair—the first production piece to his name—at the Fuorisalone in April. As with any deceptively simple design, there's more to it than meets the eye: The backrest and seat read as a squares, but the elegant lines are subtly curved throughout, striking a nice balance of formal integrity and anthropomorphic comfort. When Takeuchi notes that he'd painstakingly refined the proportions and radii, which are formed by CNC, it's less a boast than a matter of fact—the chair simply could not be any other way.

In fact, Takeuchi had only committed to exhibiting a few weeks prior to the Salone, when he received a satisfactory prototype from a local factory; his friend Henry Timi was happy to display the chair at his new-ish showroom of his eponymous luxury brand. Set off from its street entrance on Foro Buonaparte by a small courtyard, Timi's skylit gallery featured just a small selection of work: a monumental kitchen island by the proprietor himself, alongside Antonio Sciortino's wrought iron pieces and Leonardo Talarico's geometric, vaguely suprematist vases: a minimalist manifold of marble, wabi-sabi and modernism. Takeuchi's work occupied the equally spare side galleries—besides the chair, his modest debut included just one other piece, a marble dish—rounding out the work on view with a touch of understated refinement. 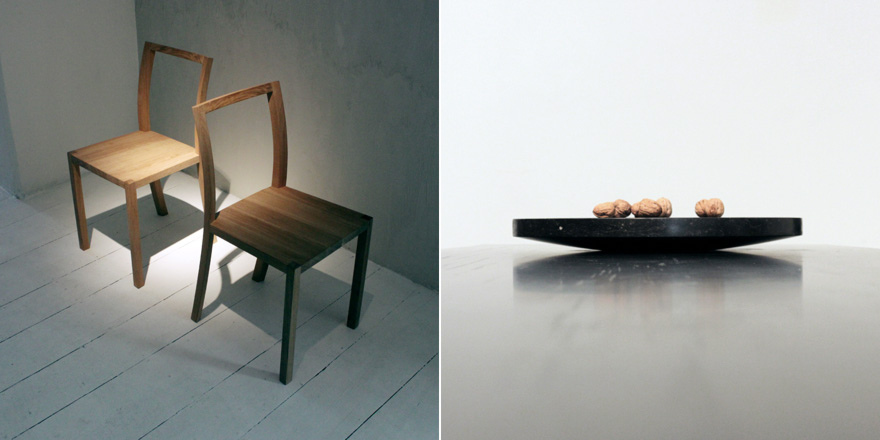 Small though this step may be, it's a proverbial leap for Takeuchi, who is keeping his day job as a designer and Milan liaison for a certain small Tokyo-based design studio. As the story goes, he's something of a black sheep, an idiom that might resonate with the sometime Kiwi: Takeuchi spent the formative years of his youth in New Zealand before attending ENSCI–Les Ateliers and subsequently returning to his native Japan, where he eventually landed a coveted job at Naoto Fukasawa Studio.

After cutting his teeth on a broad range of client projects, Takeuchi relocated to his current home in Milan, where he logs plenty of face time (the pre-app version) with Fukasawa's Italian clients, including heavyweights such as Alessi and B&B Italia. But as of this past April, he has declared his ambitions beyond stable employment. Takeuchi is the first member of Fukasawa's small team—all designers, all in Tokyo—to set out on his own, both geographically and now professionally as well.He divulged as much over the course of several conversations following our initial meeting in Cape Town, where he'd accompanied Fukasawa to the Design Indaba Conference. We crossed paths again in Milan, of course, and recently in New York City, when Takeuchi was visitng during ICFF. As we toured various showrooms, he pointed out details that are not to his taste (a chair cushion that curves towards its over-radius'd leg) and trade insights, identifying different materials based on their finish or lustre. At one point, with only a slight hint of superiority, Takeuchi commented that a marble lamp, presumably a prototype, was of middling quality. For his own discus-like platter—a flat, circular surface with tapering convex curve at bottom—Takeuchi was able to source high-quality marble embedded with recognizable bits of fossilized fauna, a felicitious expression of the permanence of the material.

While Takeuchi's broad perpsective—a distinctly Japanese appreciation for craftsmanship; an understanding of Italian manufacturing and business practices—comes from his cosmopolitan background, he also shares Fukasawa's abiding perspicacity and sense of wonder. At one point, as we're sitting outside a café in New York, he scrambles to snap an iPhone picture of a still-lit cigarette that another patron has rested atop a siamese connection, a quintessential urban fixture in Manhattan. It's an obvious instance of Fukasawa's notion of "without thought," after James Gibson's notion of 'affordance,' broadly defined as ways for humans to interact with the built environment (i.e. either turning a doorknob or hanging a jacket on it). A faithful disciple, Takeuchi can't help but document these incidental behaviors, which are instructive as undesigned cues for unintended use cases.

Despite his diminutive stature, Fukasawa casts a long shadow in the world of product design, but another cliché might be more appropriate: to stand on the shoulders of giants. Although they'd worked with one another in the past, Takeuchi was uncharacteristically star-struck when Jasper Morrison praised the chair at its debut in Milan; indeed, it bears a passing resemblance to the latter's Ply chair for Vitra. Like his mentors, Takeuchi expresses disdain for vestigial protuberances and vanity projects alike; rather, design should dissolve into the background, such that the user experiences pure utility or function as opposed to the inevitable friction of a poorly designed product. 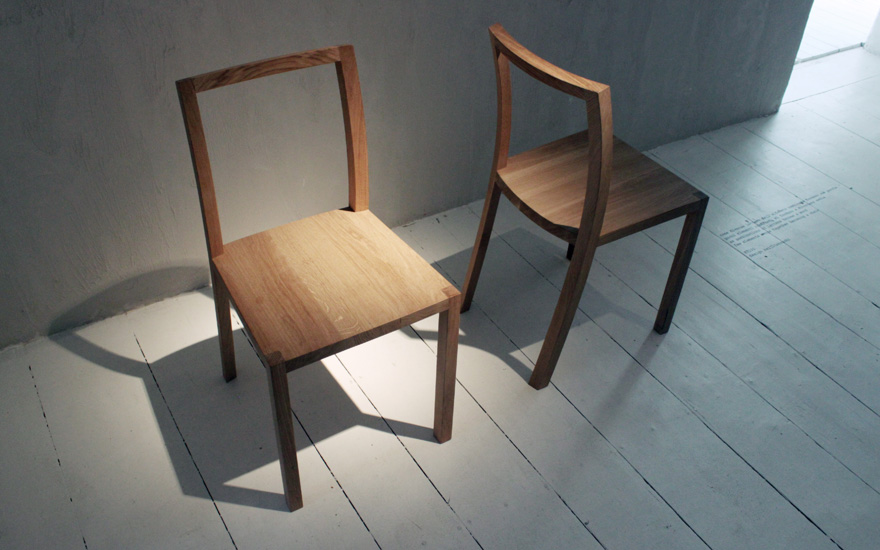 It's telling that Takeuchi has the blessing of his employer (with the understanding that he will stay with the studio for the time being): Just as Fukasawa casts himself as a kind of midwife for the objects that he designs, his young charge is poised to follow suit. After all, it is this anonymity that informs Fukasawa's non-brands Muji and ±0 [Plus Minus Zero], and only by leaving what is absolutely necessary can you justify a product as that which needs to exist. It's a fanciful conceit, but (to borrow a misattributed quote) sometimes a chair is just a chair.