More steps forward, and upward, for our robotic overlords: architectural 3D printing gets practical with a little teamwork. A group at the Institute for Advanced Architecture of Catalonia has developed a 3-robot skeleton crew capable of laying down architecturally relevant shapes and material. Using the most basic tools (off-the-shelf electronics and Erector Set parts), their team based design solves the key problem of large scale additive printing: size of the printer. To date, most "printed" architecture requires a massive external framework, supporting the large single printer in an absurdly scaled-up version of desktop machines. In order for the technology to become more than a gimmicky gesture—that architecture is, in fact, paying attention to trends—that needs to change. 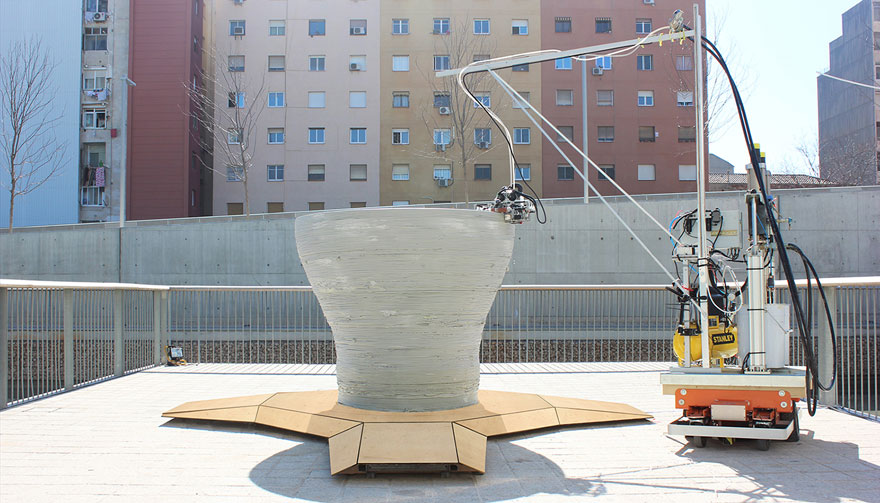 The first robot team member is equipped with a sensor that follows an initial marked path. It lays the first several centimeters of synthetic marble in a coiled foundation. The second robot fits onto the foundation, gripping the sides tightly with rollers. It continues squeezing out coils of marble, smoothing and shooting it with nearly 200° air. The head of the second team member is also mobile, allowing the form to take on curved surfaces as the coiled "building" advances. The third robot is my favorite: Breaking from the horizontal coil-pot method, it uses suction cups and pressurized air to crawl vertically up the structure. Its job is to reinforce the weaknesses of a structure built with all materials laid in the same direction. This is the biggest drawback to a coil-printed design, as anyone vaguely familiar with shear strength can imagine. (Just think about how easy it would be to squish in the side of that coil pot.) By letting this mountain-climbing robot squirt on reinforcing "beams" of marble, it can add rigidity as needed.

The futuristic autonomous construction robot dream hasn't completely arrived—this system requires a large hose-connected base that fuels and powers the printing slave robots. But, just like the rest of 3D printing, the opportunities lie in its viability for non-traditional forms, material conservancy and visionary future scenarios. 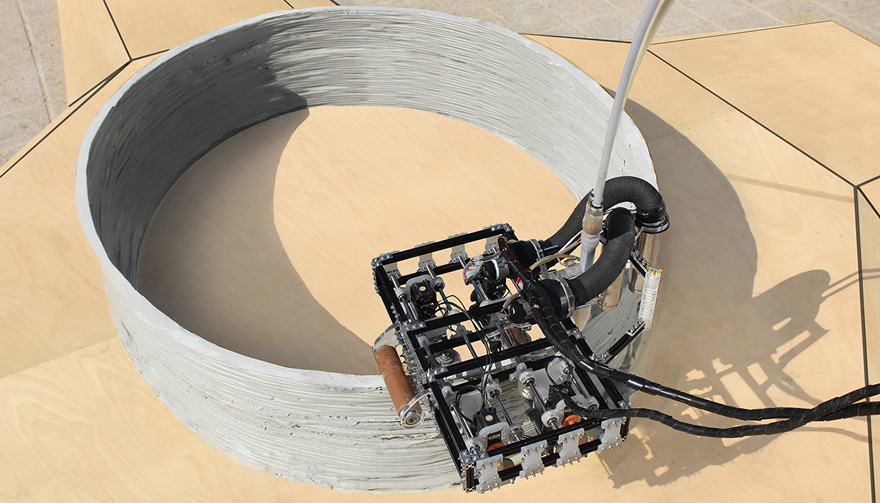 Some of you may remember that the IAAC also supported Joris Laarman Lab's large-scale digital fabrication experiments, which look like they're drawing in thin air. With the new Minibuilders, as they are known, it's still a slow and limited process (most additive manufacturing still is), but with additions for structural stability and greater automation, this type of fabrication has a promising future. To that end, the group has made their designs public and published their findings here.