The currently fashionable way to "debate" is to start with your conclusion, then seek only facts that support your conclusion, and ignore everything else. (See the commenters on our first phone-bending post who single out Apple while ignoring the bent phones from other manufacturers.) It is essentially the opposite of the Scientific Method. Thankfully, the first item in our update on the overblown "Bendgate" brings a little much-needed science into the discussion.

And there you have it. One could argue that the point of contact of the Instron testing machine ought be shaped more like a human butt cheek rather than a focused line, but at the very least this will hopefully inspire others to conduct similarly scientific tests.

Redditors took a close look at Lewis Hilsenteger's original Bendgate video, which is now up to some 45 million hits, and found a disturbing discrepancy: The clock times displayed on the phone during the "test" do not jive with the sequence of events as portrayed in the video. 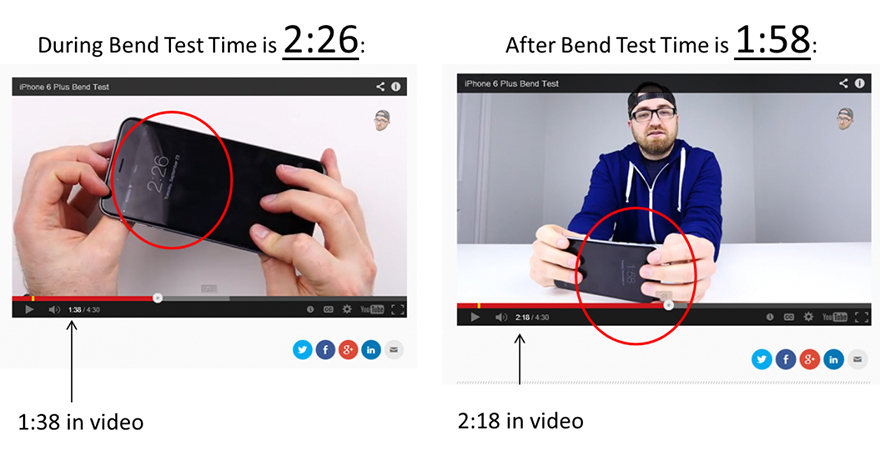 Detractors have suggested that the video is cooked. One claims that Hilsenteger is profiting from the millions of hits and another goes so far as to hint that he is actively manipulating Apple's stock price. Defenders suggest that the time discrepancy is merely to do with video editing, and one suggests that he began shooting the video at 2:26am and again at 1:58pm the next day.3. Kids Intentionally Break iPhones In-Store

The saddest bit of news concerns two guys named Kylie and Danny who walked into an Apple Store, intentionally bent four iPhones (estimated total value $2,500 plus), shot the whole thing including footage of their faces, and uploaded it to YouTube.

The video has since been deleted, but in it one of the kids is not strong enough to bend the phones, while the other manages to. They end the video with this amazingly idiotic comment that perfectly connects blind Apple-hating with youthful self-entitlement: "We were in the Apple store bending and breaking their iPhone, which is like criminal damage I guess. I don't even care to be honest, because it's Apple's fault."

Apparently casual vandalism attempts are not the domain of teenagers. Wall Street analyst Walter Piecyk walked into an AT&T store, surreptitiously attempted to bend it, and could not. He then tweeted "Just stopped in an AT&T store to try and bend a 6+. You have to be kidding me. That is not bendable. â€ª$AAPL" followed by "It's embarrassing I didn't check for myself earlier but â€ª#bendgate is ridiculous. â€ª$AAPL"."

Sadly, I think this whole "controversy" says a lot more about our society than it does about smartphones. For those actually interested in contributing something meaningful to the original "design issue or user issue" debate we hoped to have, that conversation is here.