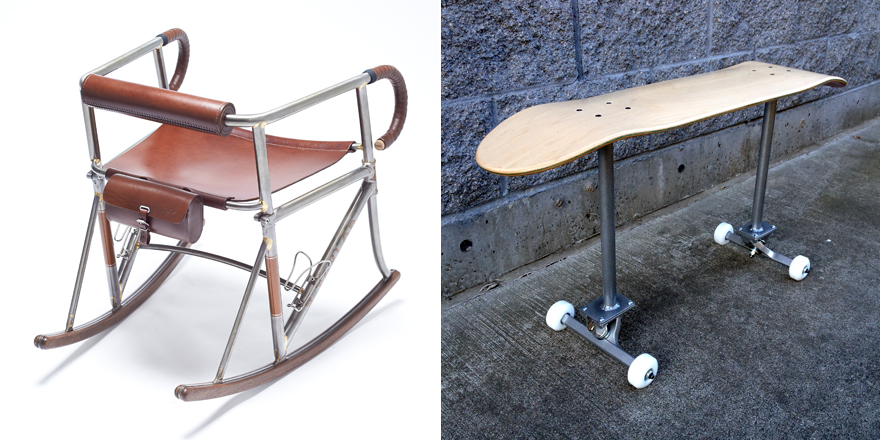 Seeing as seating and transportation are the proverbial bread and butter of design, the occasional hybridization of two functions in a single form is all but inevitable, manifested in various shapes and sizes. So too can conveyances be reimagined as articles of furniture, as illustrated by these two projects. 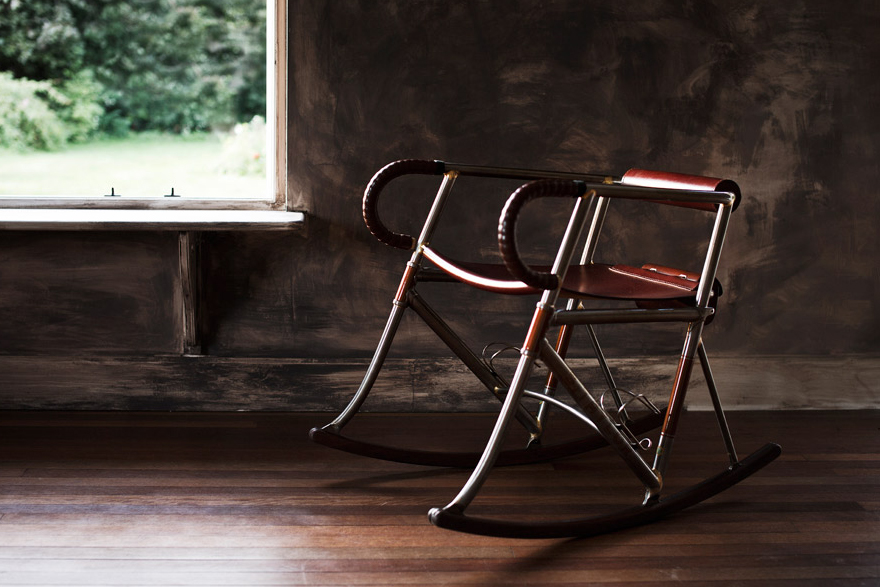 First up, the Randonneur Chair by Two Makers is easily the most interesting piece of cycling-inspired furniture we've seen in a long time. Rather less cheeky than Jeremy Petrus's homage to George Nelson and certainly more elegant than the regrettable 'Fixie Table,' the bespoke piece holds its own as a classy rocking chair even as it unmistakably alludes to the bicycle frame as a design object. The Randonneur Chair is characterized by exposed brazing at the joins, as well as lugged construction to the effect of a proper headtube and seatstay cluster, bolt and all); other features include dual bottle cages and the Brooks handlebar tape to accent the drops. While I personally would be curious to see a more subtle version of the chair sans these details, it works equally well with the overt reference points.

Inspired by classic hand-built racing and touring bicycles manufactured by the master Constructeurs of the 1940s, the Randonneur Chair is handcrafted from Reynolds 631 tubing, hardwood and bicycle saddle leather. Using bicycle geometries and traditional frame-building techniques, it is both a celebration of cycling and of bespoke British craftsmanship. 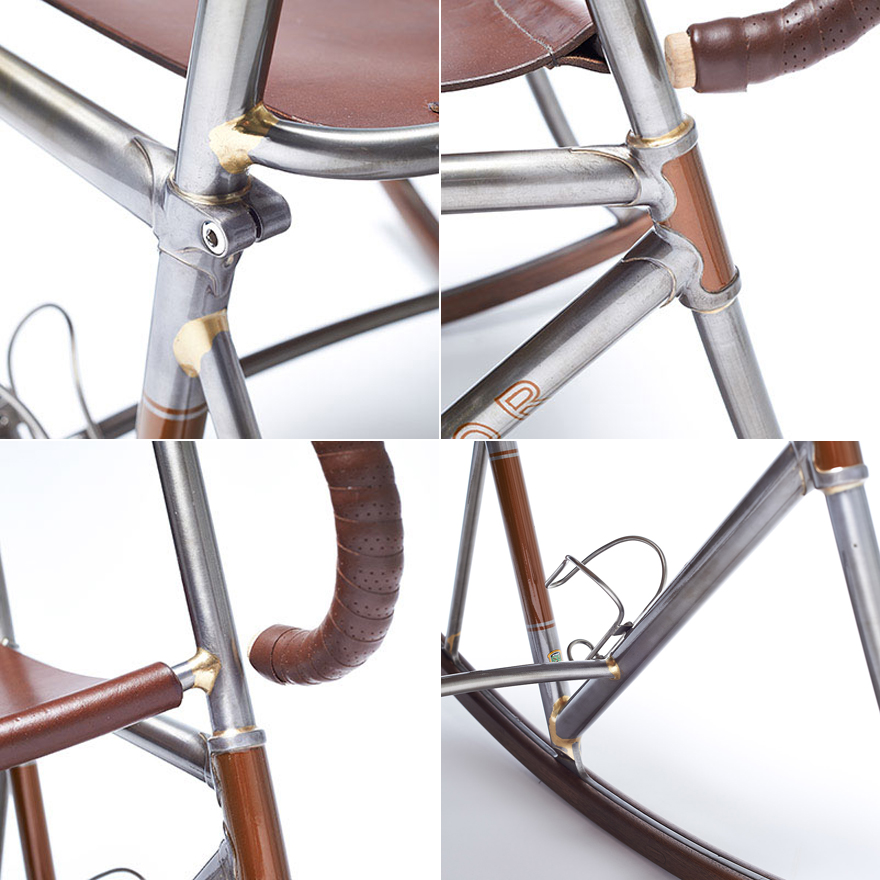 Randonneuring, of course, refers to long-distance cycling events of >200km at a clip. The equipment is generally more forgiving than road racing geometry but more aggressive than a proper touring rig; so too might the rocker be considered to be more comfort-oriented than a task chair but less plush than a recliner. (The saddle bag is a nod to distance cycling, though I personally could do without.)

Kent-based duo Simon Taylor and Andrew McDonald are the eponymous pair behind the brand; Taylor shared more about the story behind the chair on the Brooks blog.

Where the Randonneur Chair represents the paragon of contemporary artisanship, the Emery Skatebench is expressly intended for mass appeal. Inasmuch as it is based on a simpler piece of sporting equipment—with rather less history to boot—the bench faithfully abides by extant skateboard hardware: Jonas Emery's design combines a standard deck and trucks with a π-shaped bracket. Locked wheels serve as feet, attached to legs that raise the deck to a standard seat height of 18”; the struts extend from the usual attachment point of the trucks, such that the bench looks something like an Inspector Gadget conveyance (inverted deck notwithstanding). 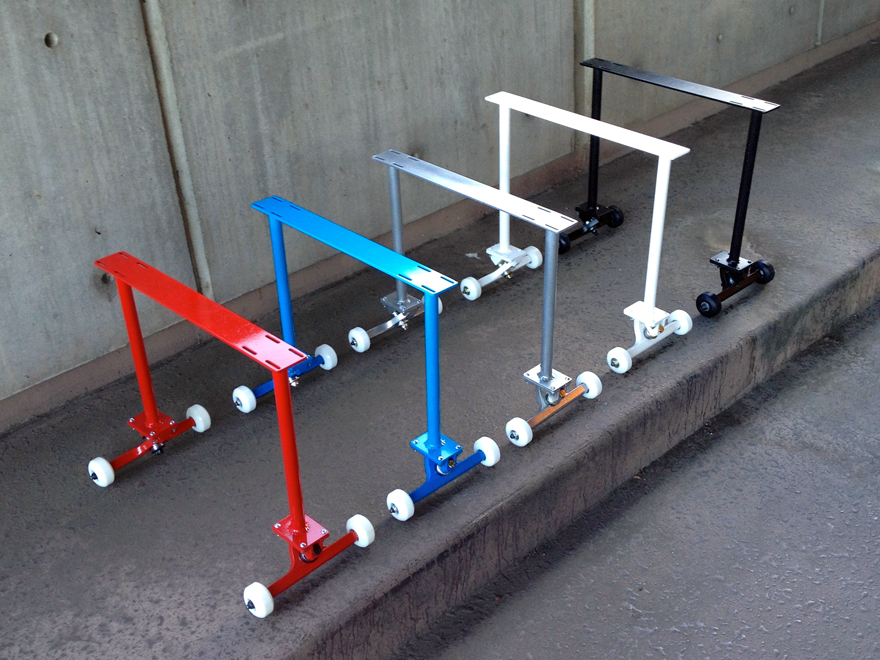 Like the similarly named (but otherwise unrelated) Skate Bench No. 1, the Emery Skatebench is available on Kickstarter in several colors as a DIY kit or complete (with deck). Considering that both the 2011 project and Emery's version originate with the same basic idea—to turn an off-the-shelf skateboard into a seat—the passing semblance between the two benches is unsurprising, something like the fact that all smartphones look like glass rectangles.

As with the Randonneur Chair, I have an admittedly minor nitpick: I'd add a crossbar—either an additional tube or a flat strip of steel that spans the trucks—for aesthetic's sake if not for function; the plate interface strikes me as a bit utilitarian.