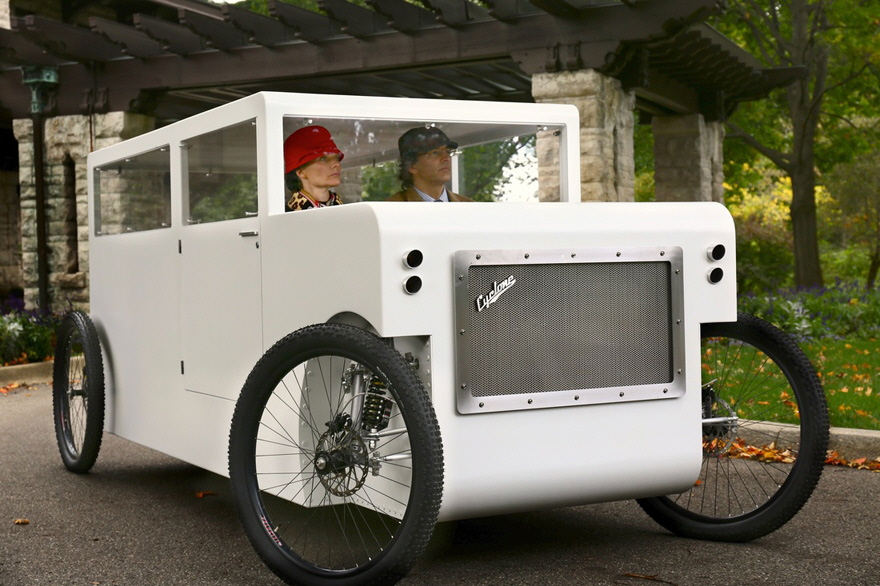 Bikes at the Detroit Auto Show?! Only for FuturePeople

The North American International Auto Show aka the Detroit auto show is an unparalleled industry focused event in the car world. It is less well known for debuting new and conceptual bicycles. This year however the show will feature a few notable drivables that steer completely clear of internal combustion. Cameron Van Dyke's FuturePeople is a project that imagines human-powered vehicles for an era when cars have become obsolete but their infrastructure remains. Despite being an efficient and accessible mode of transportation, bikes have a long way to come to commonly replace cars for leisurely driving, large cargo and rider protection. These fully built concept bike-cars draw on new and old ideas about bikes and cars to address those concerns.

The Cyclone is reminiscent of boxy luxury vehicles from the 1920s. Four-wheeled, with a long frame and a wide, leather seated two-person cockpit, it's the most car-like bike on offer. Put on your driving gloves and take an elegant country ride:

The Zeppelin is like a smooth cargo tube on a long trike base. Clearly drawing from blimpy sources on the outside, it provides contemporary cargo room on the inside. The big wraparound windshield and aerodynamic shape look sleek, and pop-out seats are an interesting way of maximizing storage. In this video, the ground-hugging bike looks like a romantic way to deliver your locally grown goods to market.

If the idea of bike cars strikes you as purely whimsical, consider that more than 90 years ago, a decidedly similar vehicle was user-friendly and affordable enough to supplant small cars for those who couldn't afford them. FuturePeople looks forward to a day when they might again.