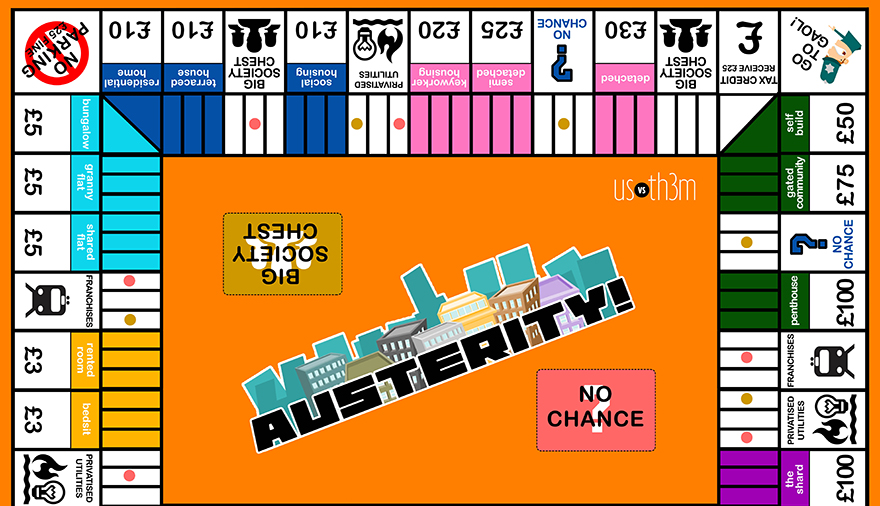 Apparently, everyone's favorite familial relationship testing board-game Monopoly was first conceived in 1903 as an educational tool by American Elizabeth Magie— the game-play intended to illustrate the negative aspects of concentrating land in private monopolies. Over a century on, the brand has lost much of its satirical sting—indeed, now something of an icon of good ol' fashioned business to hard-nosed capitalists and presumably an educational tool of a different sorts for their offspring—but the intended message of the original has only increased in pertinence with real estate crisis hitting a large amount of modern cities in recent years.

One of the key failures of Ms. Magie's anti-monolopy propaganda was, of course, starting her players on an even setting with the board's market an untouched open playing field. Creators of Austerity! —journalists at London based blog UsVsTh3m—have remedied this naivety in their satirical reimagining of Monopoly in a cruel post-financial crisis era, splitting players into "bosses" and "plebs" (UK slang for 'ordinary guy') from the get go—the bosses skipping around the fast-track outer-ring of the board and the lower mortals resigned to the slow-progress of the many hurdled inner-ring with only £57 at their disposal (the number being the typical amount received per week as social security payment in the UK). 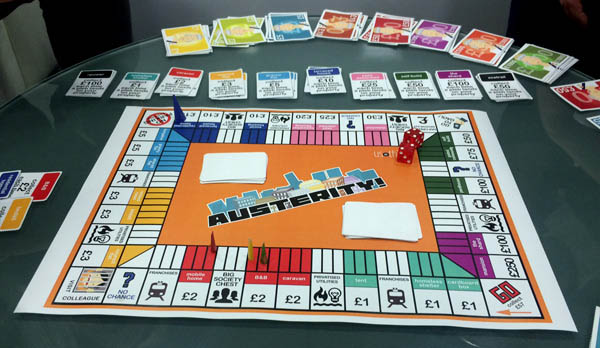 Of course, UsVsTh3m are not the first to critically reimagine the game—San Francisco State University Professor Ralph Anspach notably having created Anti-Monopoly (in which players fight tyrannical monopolies to return the board to a free market state) in the '70s, having noticed that the original had come to glamourize monopolistic business.

Although not scoring too highly on design execution, Austerity! is layered with lampooning of all sorts of British businesses and institutions from the failing railways and energy companies to politics (the community chest having been replaced by "Big Society Chest" in reference to David Cameron's much mocked, platitudinal policy of Big Society). Perhaps someone will recreate the design for the current economic mess in the USA.

Head over to UsVsThem to see what happened when the creators played their game—illustrating just how quickly the rich get richer and the poor completely destitute—or to download the pieces to recreate it yourself.