The Sweater Stone, Patagonia, Product Longevity, and How to Keep Customers for Life

Pumice stones and sewing machines can make all the difference

"Sustainability" is a popular buzzword, but I think we should also consider "longevity." When a company has sustainable practices but you must re-buy their products every few years, it seems obvious that we should be leaning more towards longevity.

This is Patagonia's Men's Better Sweater Hoody, which I purchased three years ago for $159: 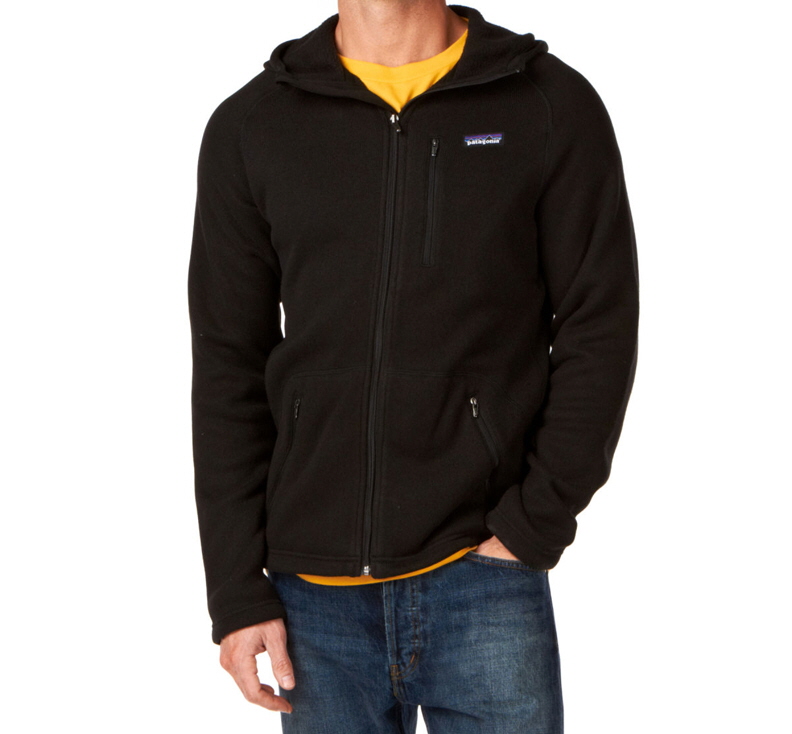 Because my apartment is freezing and I spend a lot of time outside in the winter, I wear it literally every day from the start of November to mid-March, a solid 4.5 months, every year. From a functionality standpoint it's lightweight, warm, has handwarmer pockets and a hood, which I have grown to prefer over hats (less things to lose outside).

After three years of use, the surface has become pilled: 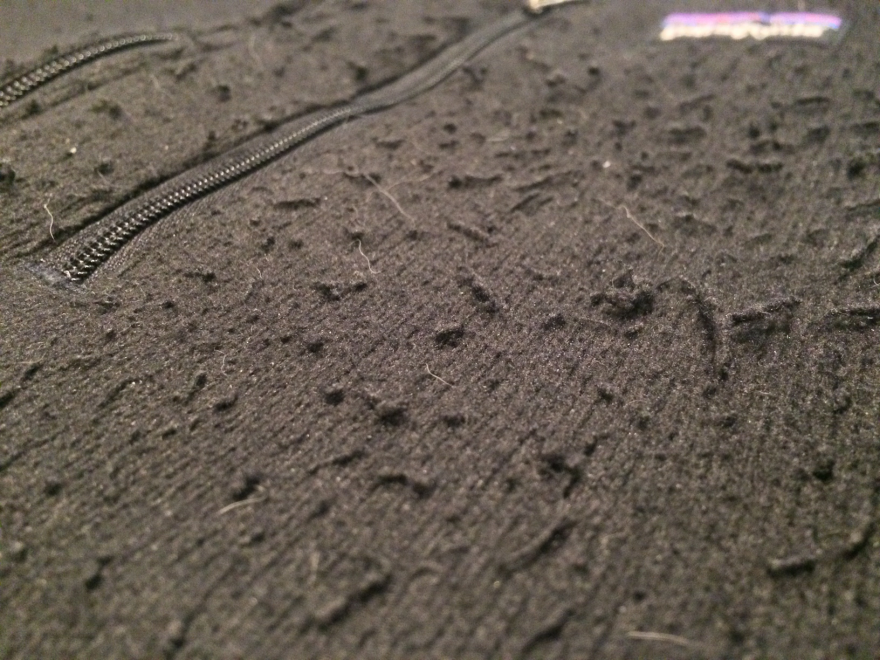 Because the garment is so functional, I've lived with the pilling and have resisted buying a new one, because it just works.

Until yesterday morning, that is. Something happened when I was hurriedly yanking it on and the zipper separated from the lining, preventing me from zipping it up all of the way.

I resigned myself to the fact that I'd have to replace it and headed to a local Patagonia store. I'd only gotten three years out of it, but in this day and age, I figured that was the best I could do.

At the store a 20ish sales clerk approached me almost immediately to see what I needed. I asked if they had any more Better Sweater Hoodies in my size. "I'm sorry, we're out of that one for the season," he apologized. "All we've got is XL. May I ask why you're looking for that one specifically?"

I unzipped my outer jacket to show him the Hoody I was wearing underneath. "The zipper has started to separate," I said.

"Oh, we'll just fix that for you," he said. "We can replace that entire zipper lining. This store is a new location and our sewing machine hasn't arrived yet, but it should be here next week or the week after. Bring it by and we'll fix it for free."

"Uh…really?" I said. It was so long since anyone in any retail environment had ever offered to fix something rather than trying to sell me a new one.

He took a closer look at my Hoody. "And in the meantime, I've got a Sweater Stone you can use to get rid of that pilling," he volunteered. He disappeared downstairs and came back with this little white box: 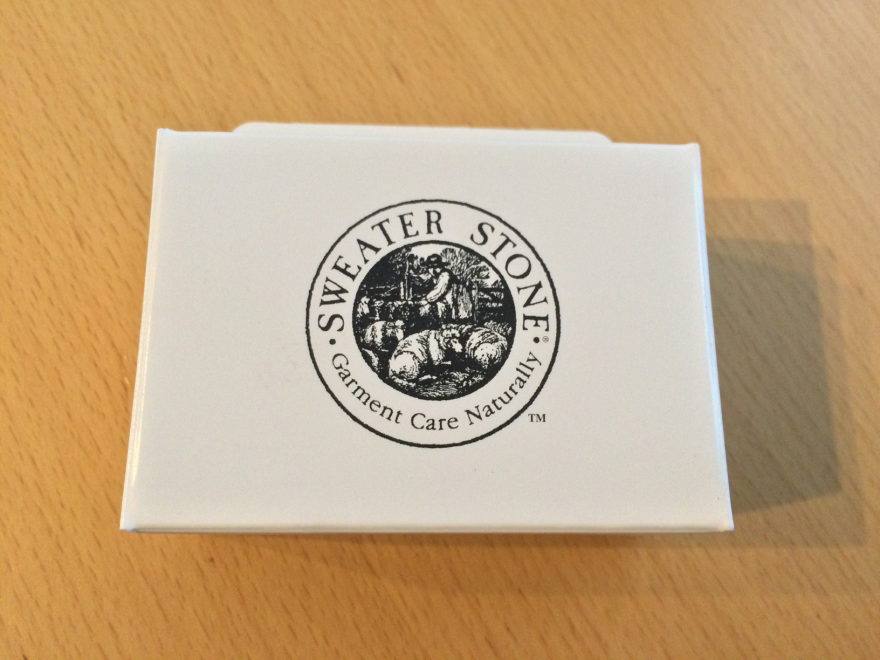 "This thing does a great job, you can literally make the Hoody look brand-new," he said, handing it to me.

I looked around for the register. "Great, where do I pay?"

"No no, it's free," he said. "Take it, and let us know how it works out. Start using it under the armpit or an inconspicuous area until you get the hang of how to use it. And check back in next week or the week after when we've got the sewing machine, and we'll fix that zipper too."

I'd never heard of a Sweater Stone, but I went home to try it out. 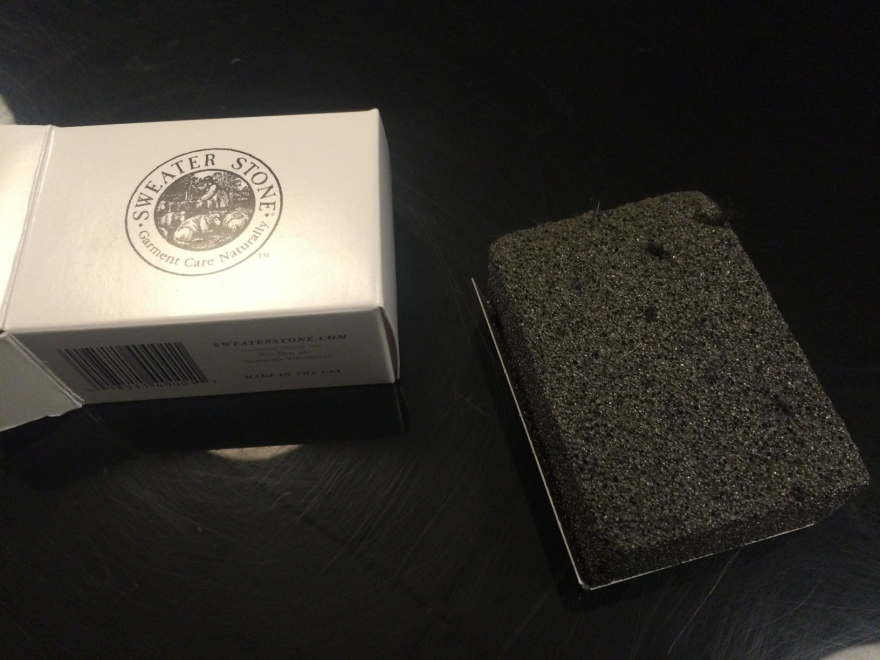 It's a black piece of pumice stone and didn't take long to figure out how to use: You lay the garment flat on a table, then drag the stone's edge along it and it just snips the pills off after a few passes. I found it works best when you go "with the grain" of the garment, and in only one direction. After maybe two minutes, here's what one side of the garment looked like versus the other, un-stoned side on the right: 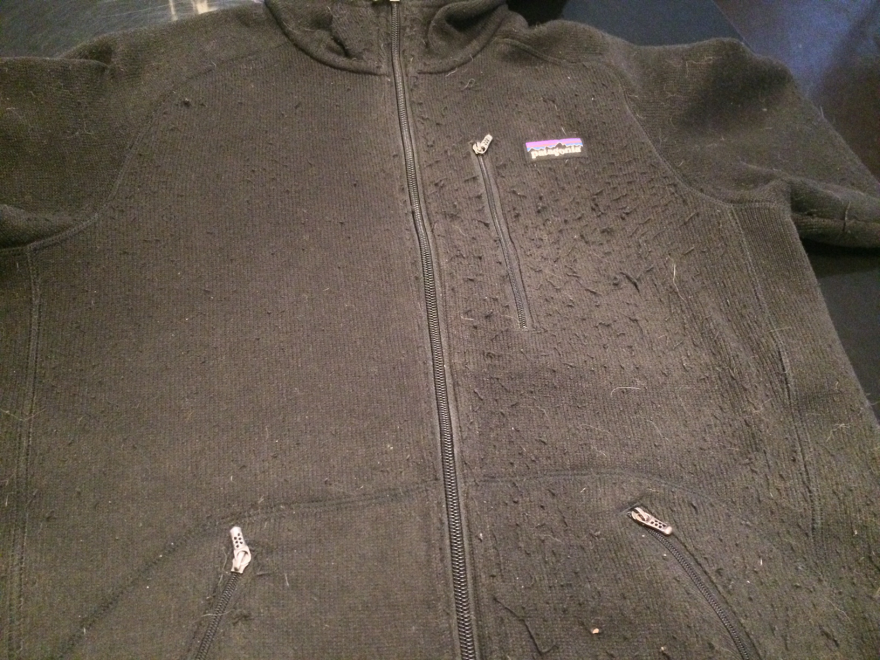 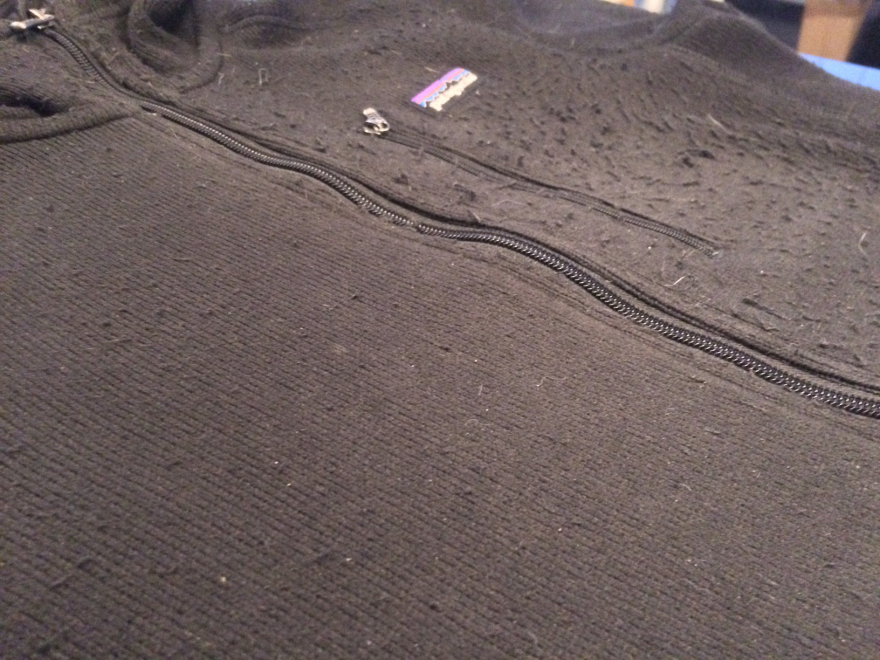 The Sweater Stone isn't an expensive item, I looked it up and it's available for mostly sub-$8. Nevertheless I did not expect them to give this to me for free, unsolicited; the store clerk's prime concern seemed to be to help me solve my problem, not make a quick buck. So this is the third Patagonia retail episode I've had that has reinforced that I'll be a lifelong customer.

With the first, the waterproof lining on an expensive jacket I owned failed after three years. I found it was because I had washed it improperly and caused it to delaminate; after the clerk educated me on the right way to do it, they still replaced it for free.

With the second, the waterproof lining on a pair of Torrent Shell pants I bought there failed after four years. These had delaminated due to pure heavy use and friction. Again, they unhesitatingly offered me a free replacement. This episode was notable because it was handled by an older, more senior sales clerk who had a younger, new clerk in tow and instructed him, on the fly, how and why they handled replacements like this.

Then there's this third one with the free repair.

I'm impressed with Patagonia not only for their policies regarding sustainability and longevity, but because they have somehow managed to train this into their front-line retail employees, and have empowered them to offer solutions on the spot. They didn't have to call a manager and have me wait: The first two offered me replacements unprompted, and the only questions asked were seeking to understand how their product had failed. This latest guy asked the right questions to figure out what I needed and offered to fix it free. He also spotted the pilling, something I hadn't even asked about, and instantly enabled me to fix that for free.

In contrast, after my North Face jacket failed five years ago, after just a single season, I brought it to the store to ask about repair. The bored teenage sales clerk looked at me like I was crazy and suggested I buy a new one. That was the last time I patronized that brand.

And I've gotta say, Patagonia does a pretty good job promoting another kind of longevity: That between the company and the customer. Whenever I need to buy garments that last or that will be fixed or replaced should they fail prematurely, I'll return.

The Sweater Stone, Patagonia, Product Longevity, and How to Keep Customers for Life