Conservator Christopher Storb's "In Proportion to the Trouble" blog

The Dietrich American Foundation seeks to both preserve and publicize 18th-Century "historically and aesthetically important examples of American decorative and fine arts"—in other words, at least to us, American industrial design before there was such a thing as industrial design. We don't mean that these products were mass-produced, but that they are early examples of craftsmen solving problems—primarily furniture-based—for clients, and trying to make them beautiful, while grappling with how to evolve their style beyond European boundaries.

Christopher Storb is the D.A.F's Conservator, based out of the Philadelphia Museum of Art, and since 2010 he's been documenting his work on his personal blog, which he calls "In Proportion to the Trouble." The title left us scratching our heads, then we read Storb's explanation for it, which was cribbed from the Carpenters’ Company of the City and County of Philadelphia’s Rule Book from 1786:

The first rule for valuing House-Carpenters work…states “Drawing Designs, making out Bills of Scantling, collecting Materials, and sticking up Stuff, are to be charged by the Carpenter in proportion to the trouble”. In other words, the charge for this work must be determined by an hourly or daily rate rather than a uniform scale of pricing for work established by the Carpenters’ Company.

"Sticking up stuff," you gotta love it.

Storb details projects like this very unique writing desk with some crazily small half-blind dovetails cut into it (see third and fourth photos below) and a hidden compartment activated by a spring lock (see fourth photo below). It's made of black walnut, and Storb estimates it was made around 1770 in Chester County, Pennsylvania. "This was a remarkable and complicated object," he writes, "and I assumed I would come across this type of elaborate interior in the future. But I’ve not seen the likes of it since."

The captions on the photos below are his: 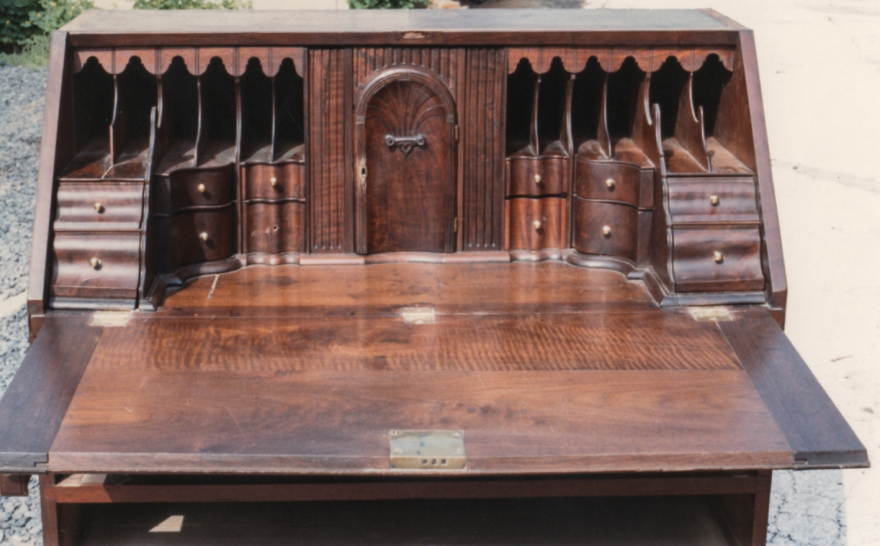 The desk interior behind the fall front is extremely complex with no surfaces or drawer fronts left unshaped. 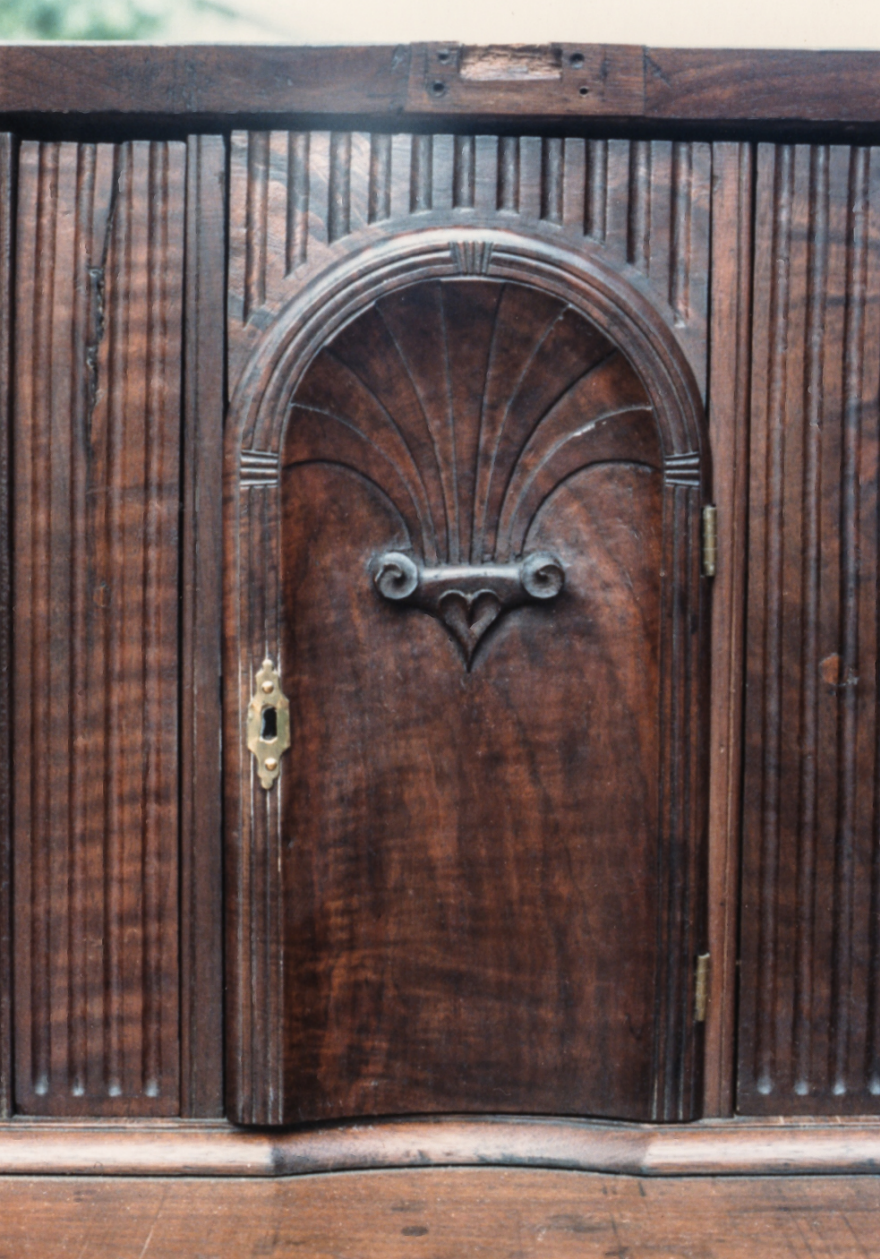 The prospect door is dished with a carved fan with a heart and scroll motif. Like the rest of the interior it is made from figured black walnut making this work more difficult than it would be in straight grained wood. 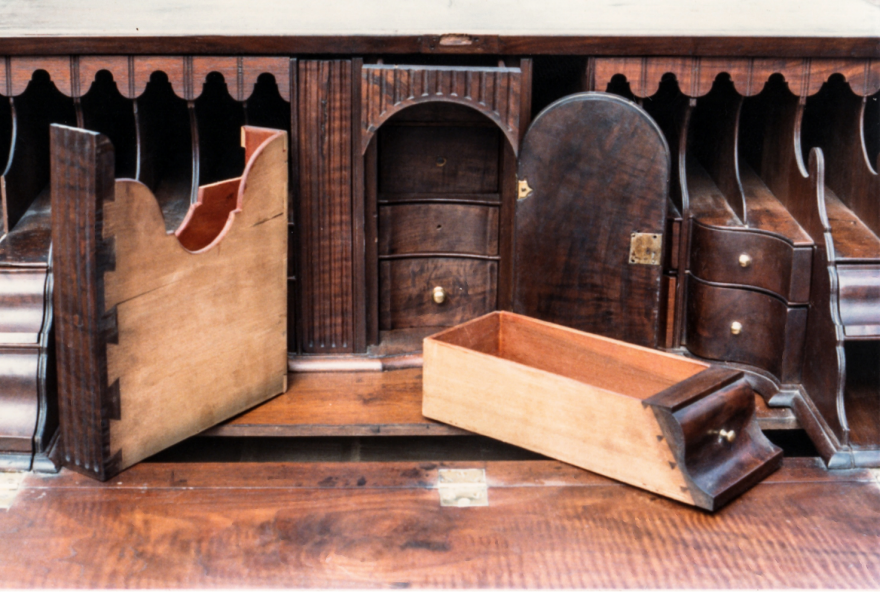 The horizontal grain of the sides of the document drawers are dovetailed to the vertical grain of the walnut fronts. The front of the small drawer is canted back to accommodate the shaping. The top of the prospect door is arched and there is a small drawer above it. 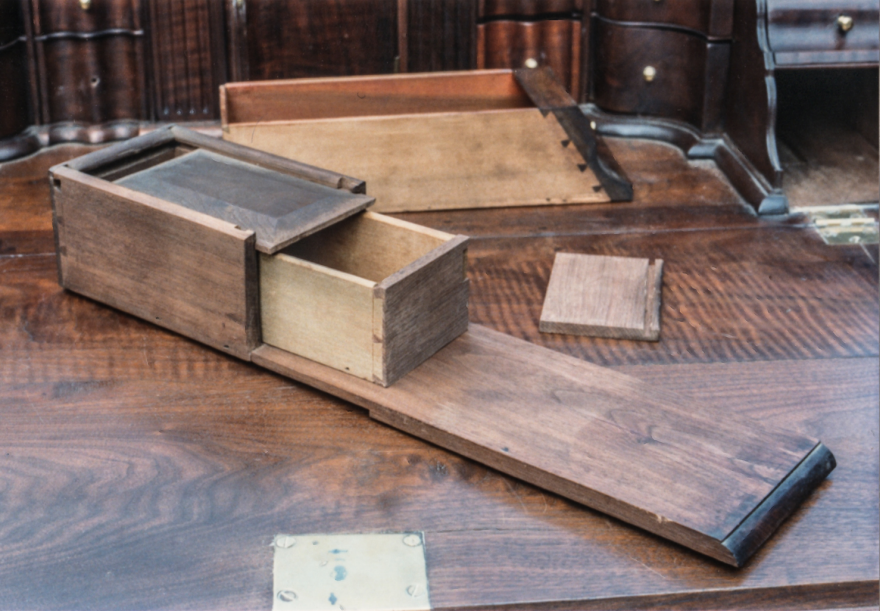 When the lower drawers at the sides of the interior are pulled out a spring lock, accessed from the upper long drawer of the case, is sprung to allow a section of the ledge under the drawers to be removed reveling a hidden drawer at the back with its own sliding lid.

For the woodworkers among your curious about how carpenters and joiners did their work 200-plus years ago, Storb also occasionally goes into construction details, as with this "high chest," which shows an early example (at least for us Americans) of bending wood to follow a form.

The thin (3/16? thick) single boards are remarkably intact with few shrinkage cracks even though they are flat-sawn and nailed in place. Another days work in 1760 but try it today and see what you have two hundred and fifty years later. This is not easy. If the wood were green when bent to the curve of the scroll it would take the curve easily. But then it would split to pieces as the wood dried. Wait until the the boards are bone dry so the potential for shrinkage cracks are reduced and try to bend it to this shape. 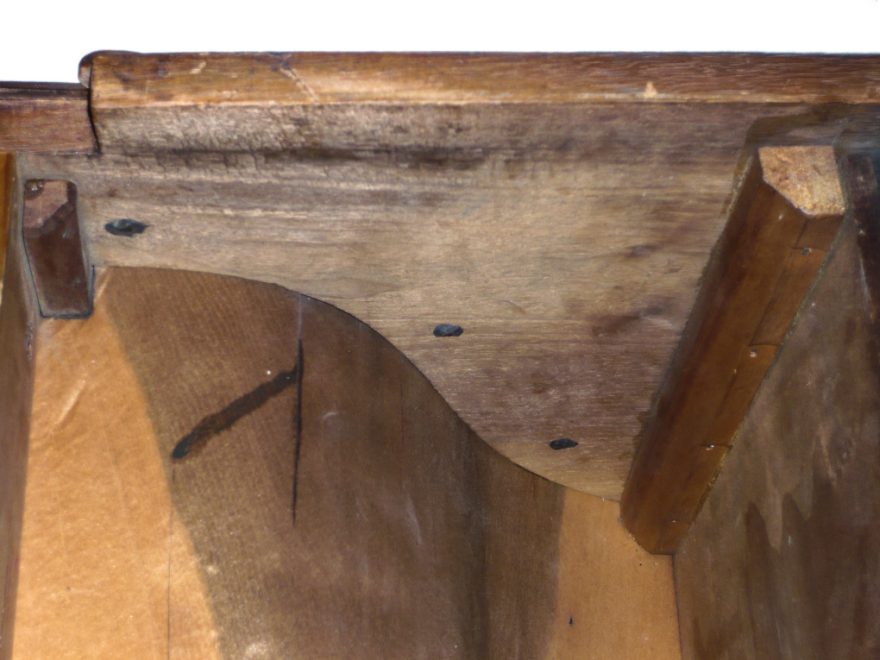