The Czech artist Helena Lukášová on her fungi-inspired, face-eating mask, and other experiments in digital fabrication 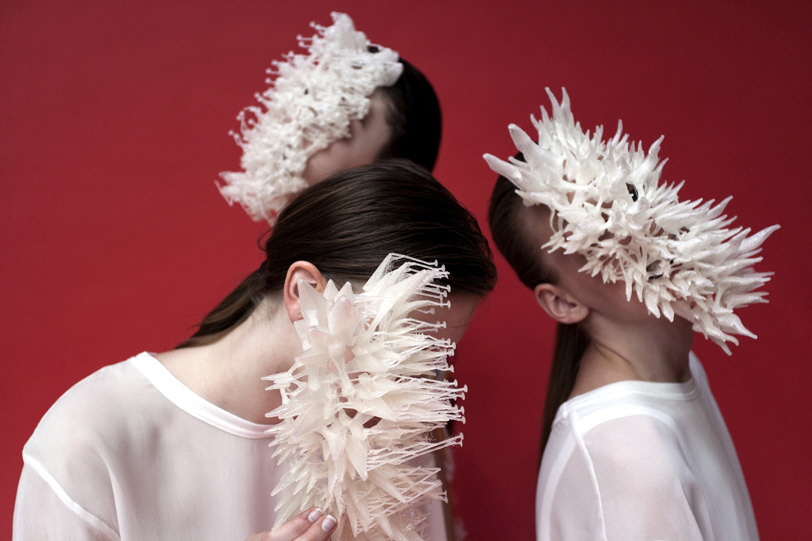 Rows of brightly colored PLA and rapid-prototyped pieces filled New York's Javits Center the other week for the annual 3D Print Design Show. The expo, which has been traveling internationally since 2012, invites manufacturers and makers alike to share their latest creations. It was there that the work of the Czech artist Helena Lukášová caught my eye. A blood-red, thorn-covered mask and a fur coat adorned with delicate gold arms and legs stood out in stark contrast to the LARPing helmets and novelty key-chains filling many of the booths.

Initially trained in fresco painting, mosaic making and woodworking techniques at the Academy of Fine Arts and Design in Bratislava, Slovakia, Lukášová became fascinated with digital additive and subtractive processes following a stint at the Johnson Atelier Technical Institute of Sculpture in New Jersey. Lukášová watched closely as sculptors at the facility used CNC-milling machines to produce work for clients. "It was just after the Velvet Revolution in our country—the society changed from the domination of communism to an open society," explains the Czech artist, who received her MFA in 1996. "The change in education I have experienced during my studies was also a revolution in a way. This experience keeps me aware of the fact that things can change and be totally different, be it in a conceptual meaning or in technology." The experience eventually inspired her to return to the Czech Republic and, in 2005, begin PhD studies with a focus on digital sculpture. 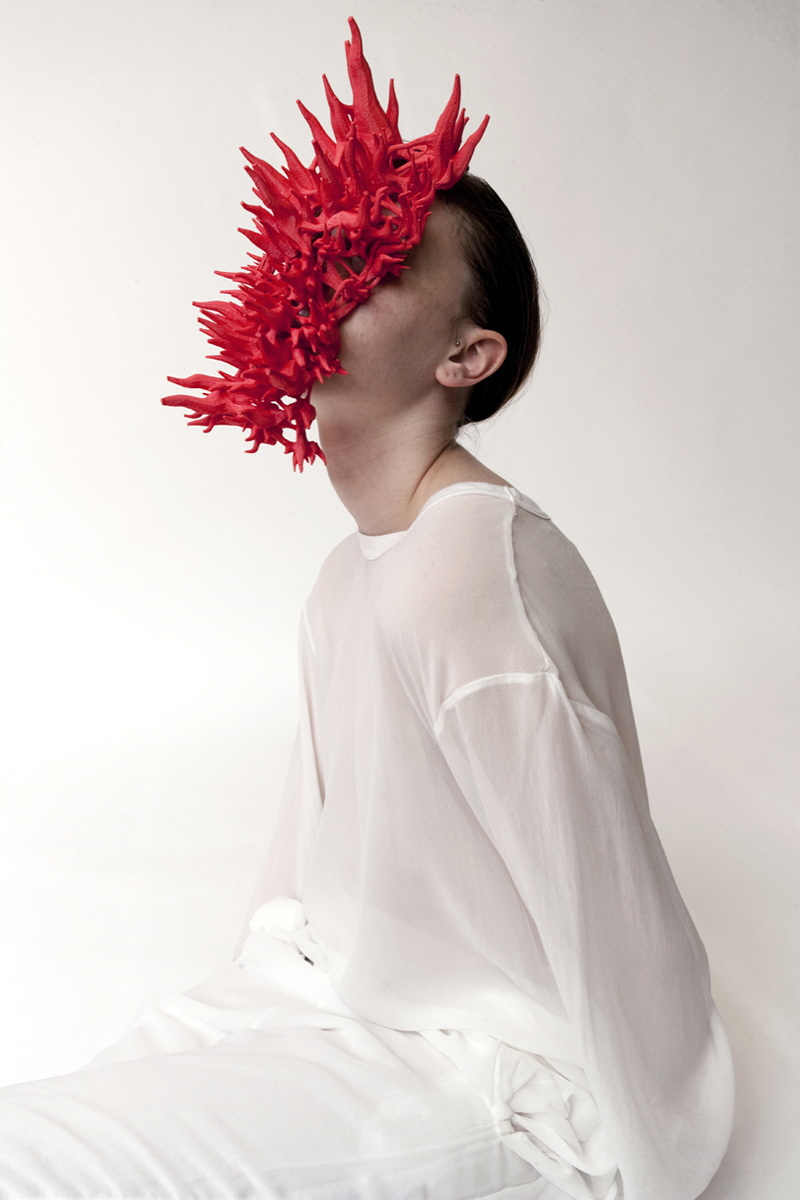 The Cordyceps mask take its name from a parasitic fungi. All product photos by Karin Zadrick 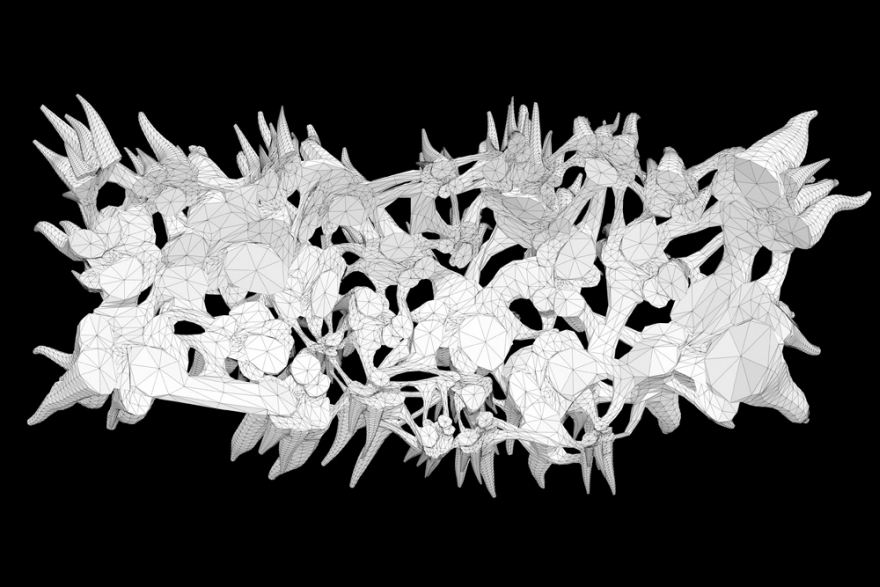 "I did very detailed research on that topic, which was not easy, as there was no representative publication about digital fabrication," the artist says. Lukášová's first printed piece was a tiny print of a female figure sitting on a pedestal overlooking a huge visualization of herself, called She About Herself in One Person. The artist continued to explore the medium, using a mix of photogrammetry, 3D scanning, 3DS Max and Mudbox to digitally build out her designs before sending them to be printed at Printed Nest, a prototyping community with workshops around the world, including in her city of Brno, Czech Republic. "Patience, patience, patience," Lukášová says, describing what it takes to build these pieces. "I learned it by doing embroidery. Modeling on the computer is time consuming and very meditative for me."

In her latest work, Lukášová tries to come up with concepts that require 3D printing for the final fabrication. At the 3D Print Design Show, Lukášová presented two projects created in collaboration with the fashion designer Denisa Nova. The aforementioned blood-red mask, called Cordyceps, was one of 15 in a series for the presentation of Nova's Spring/Ssummer 2014 collection; a series of 3D-printed clothing and heels, called You Are What You Wish For, was made for the designer's Autumn/Winter 2015/16 collection.

"We had great interdisciplinary experience working together," Lukášová says. "The human body has always been very interesting to me. I took molds of my own body, creating sort of human skins, then worked with the trajectories of the movement of the body in space using motion capture." For Cordyceps, which takes its name from the parasitic fungi, Lukášová built structures that represented different stages of growth, pulling inspiration from the growth of crystals, coral, coal and symbiotic colonies. (With real-life Cordyceps, spores attack living insects, then grow into beautiful, suffocating structures that eventually take the life of their host.) 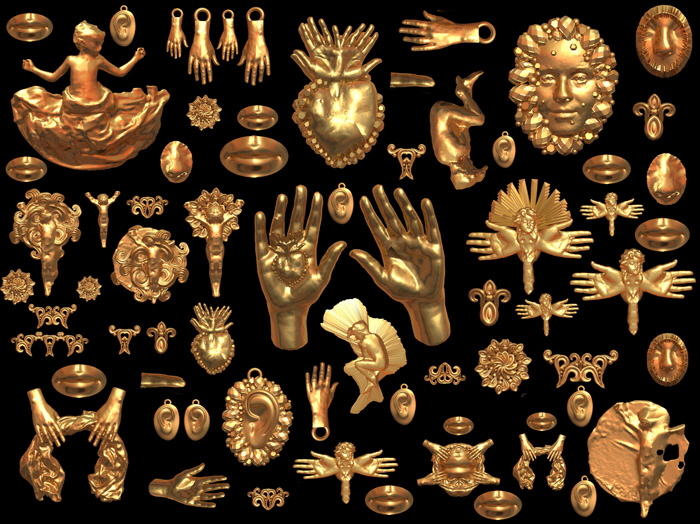 Renderings for You Are What You Wish For 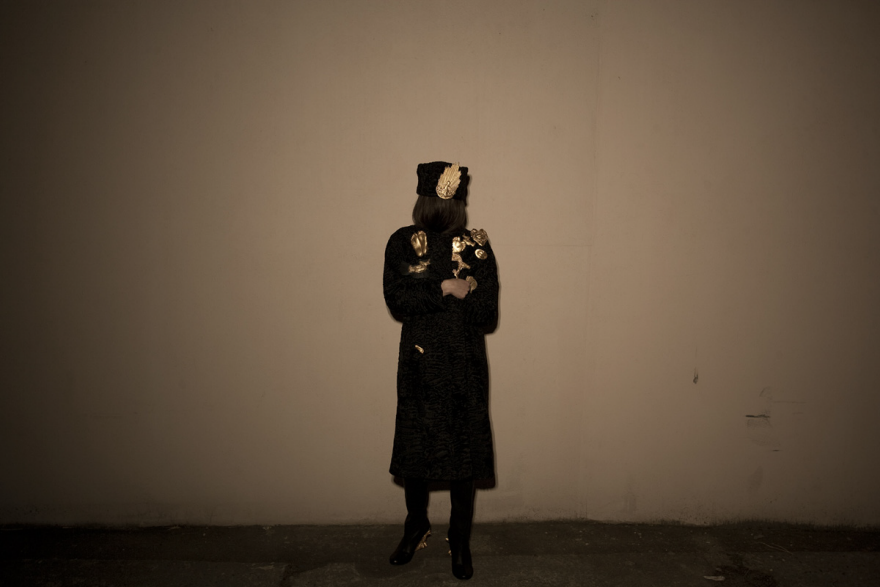 The tiny gold body parts are hung from a restored vintage Persian coat. 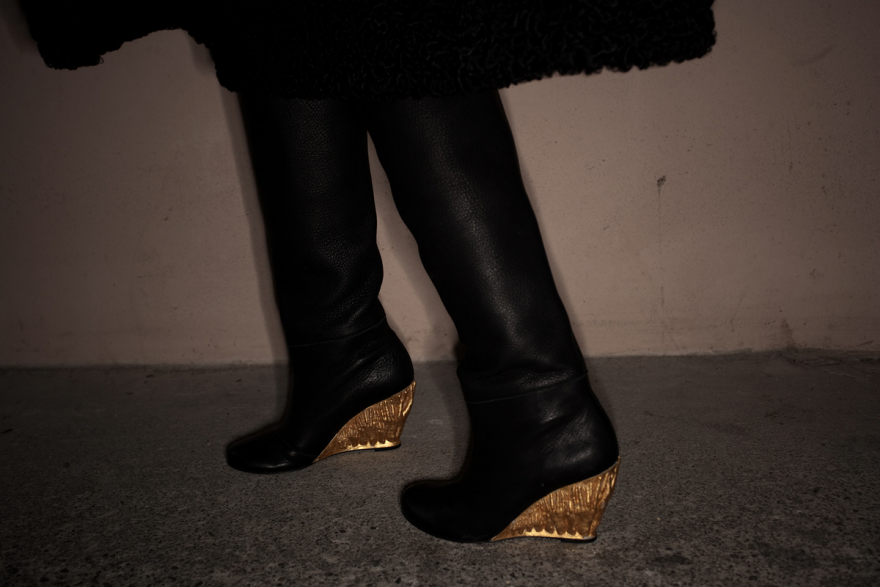 Gold heels from the same series

The second series the duo presented, You Are What You Wish For, consisted of tiny gold body parts adorning various items of clothing. Lukášová used a 3D scanner and photogrammetry to scan and create digital files of the closest members of her family. "Digital tools let us work with 3D images that are charged with a lot of personal emotions and intimacy," she says. "These are just like photos of loved ones carried around in your purse." After printing out the scans, the artist applied gold leaf to the surface of the pieces, also treating the heels with a gold finish. "The 3D print loses its technical plastic look, and the gold makes the print lines more pronounced, thus creating an object which has a very antique feel without trying to mask its digital origin," Lukášová explains. The final golden limbs were then adhered to an old Persian coat Nova obtained in Belgium before painstakingly restoring it to its original state.

Lukášová sees the repurposed piece as extending the life of items that otherwise would be discarded. In the case of the Persian coat, the rare fur comes from baby Karakul lambs. "This is, of course, ethically not acceptable," she says. "To work with such a precious material, the remains of creatures once living their short lives, means to extend the existence of their physical presence." For Lukášová, the coat also brings to mind thoughts of Europe's troubled history in the 20th century, emphasized by hanging gilded arms and legs from the animal's hide.

As an artist using this medium, Lukášová often finds herself grappling with the conflict between creating unique works of art and the fact that these pieces can be endlessly duplicated. "Do I really want to print an infinite number of pieces?" she wonders. "Do I want to create limited editions? How do I protect my designs? Should I destroy my digital file at some point to ensure that more pieces cannot be recreated? The fine art [world] is more sensitive to the number of the copies of a piece, which compromises its uniqueness."

The artist balances those conflicts by introducing variations into her work, rendering each piece different from the last. By manipulating the file or pushing her digital models to the limit of what the printer is capable of, Lukášová is able to create imperfections that range from gaps and holes to jagged strings of plastic that cling to the final print. In many ways, the process can be likened to collaborating with the machine itself, as the internal robotics try to make sense of the 3D model, each time deviating from the file to find a new solution with uncontrolled results.

"I think we will see a lot of applications for parametric manipulation of the digital file for printing generative variations in the future," Lukášová says. "New and creative software are very important to develop this idea further." We'll stay tuned for next year's exhibition to see what the artist comes up with next.