New York City is hard to leave. I don't mean emotionally, I mean physically; getting to and from JFK is a total pain in the ass. It'll take you three or four expressways by car, or a roundabout, unpredictable subway ride on the A- or (shudder) the J-train.

Things would've been different, if a slightly batty real estate developer had had his way in 1946. William Zeckendorf, who owned the Chrysler Building and had hired the likes of Le Corbusier and I.M. Pei for his projects, proposed what Life Magazine referred to as "New York City's Dream Airport:" 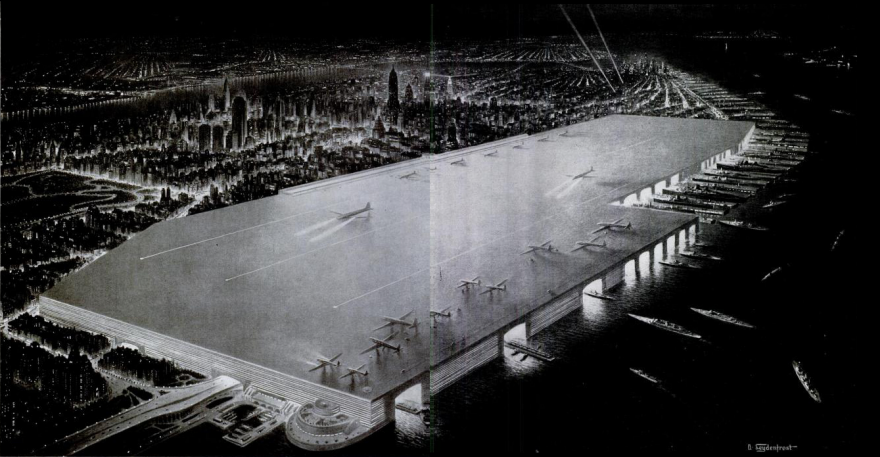 [The airport would be] built 200 feet above street level righ over 144 square blocks of Manhattan's crowded, valuable West Side from 24th to 71st Streets and from Ninth Avenue to the [Hudson] river.

On the top 990-acre deck, which is 12,000 feet long by 3,600 feet wide and is roughly as big as Central Park, are three parallel runways to handle plane traffic.

Under the landing platform are a series of buildings ten stories high, topped by a vast hangar deck with a 50-foot ceiling clearance.

As someone who dislikes the west side of Manhattan—I'd like to run a huge reciprocating saw down 9th Avenue and push everything west of it across the river to Jersey—I could've gotten behind this plan. But unsurprisingly, either the noise, logistics, loss of usable housing or the sheer cost (in the billions) put people off.

So I need another city-centered airport concept to get behind. I think I'll get a petition going for this fanciful 1919 illustration in the London News: