Here's how Festool brings a new power tool, the Conturo, into existence

Who the Tools are Aimed at

Here we'll get a chance to look at Festool's design process. It makes the most sense when you understand whom they're designing for. "Our main target are professional users of tools," says Christian Oltzscher, Festool CEO. "In the U.S., we had a reputation for a while that [wealthy hobbyists] are buying Festool. But that's far from our goal. Everything that goes into a tool keeps the professional user in mind. If the home hobbyist is buying our tool, that's great, but that's not exactly who we're developing the tools for." 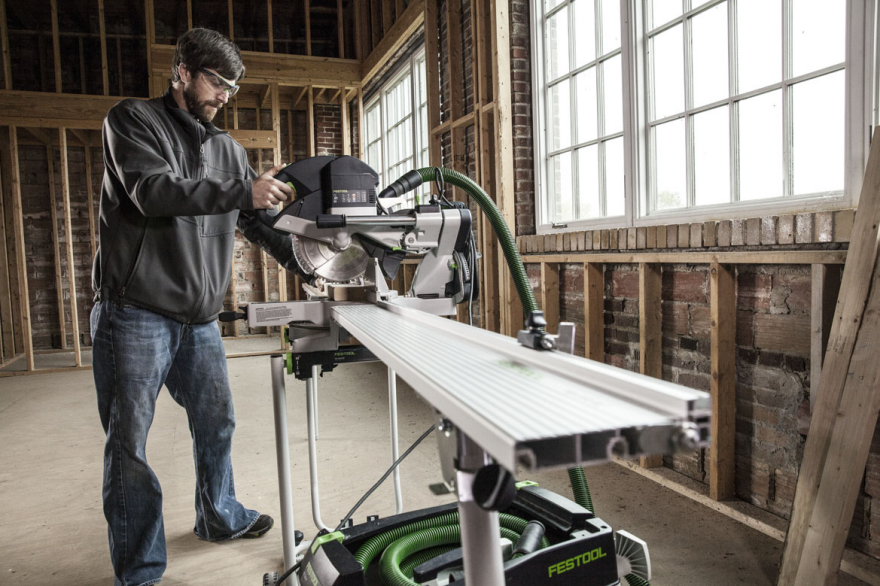 Research in the Field

Which brings us to the question of how the company decides what to make. "[We maintain a] continual exchange with tradesmen," says Barbara Austel, Festool Company Partner and granddaughter of company founder Gottlieb Stoll. "Starting with carpenters, joiners and woodworkers, then painters and varnishers, through to tradesmen in specialist industrial operations, such as manufacturing mobile homes and yachts." By observing their processes, the company locates gaps in efficiency and turns their attention towards solving that specific problem.

Wolfgang Reines is one of the Festool employees that conducts research at end users' shops. The environment is not unfamiliar to him: Reines was trained as a carpenter. But once he's back in a tradesperson's shop, "I immediately switch to my role as a product manager," he explains, "where I have to analyse every working situation, every process and even every individual action from a very different perspective.

"I then arrange a meeting with the cabinetmaker to discover more about the processes in the workshop. Or hold discussions with staff to gather valuable information on how to achieve the desired result more quickly. I also try to obtain ideas that could help achieve an overall better working result."

Armed with these insights, product development can begin. As we saw in the Domino article, this sometimes requires inventing an entirely new category of tool, a new way of doing things. The Domino was a success because it greatly improved a common operation with a new method, achieving results in a way people hadn't conceived of prior to the tool's introduction.

Festool's newest tool, the Conturo, is different in that it's far more sophisticated. On the surface, it may seem to do something you've seen before in a tool. But the attention to design and engineering make it radically different to use than what came before. 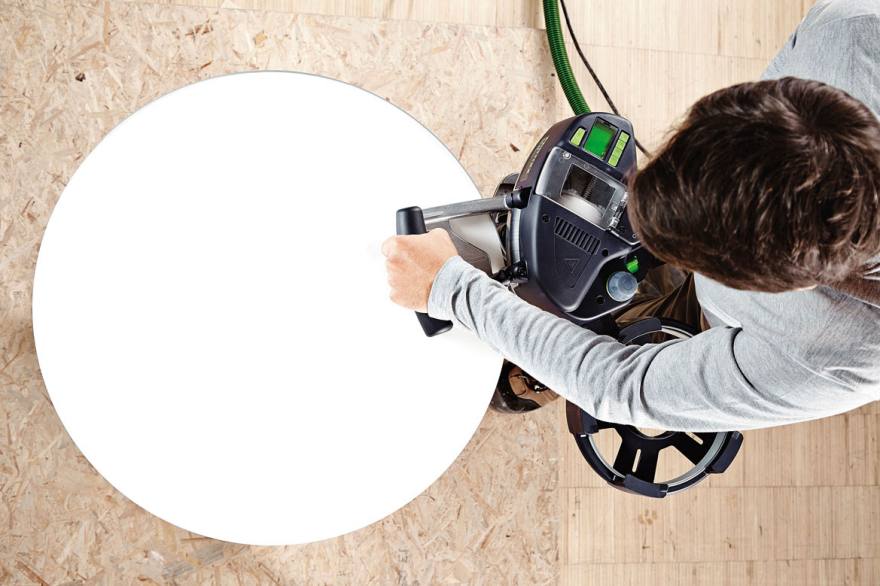 Festool's product development process is "all about the details, the ergonomics," says Oltzscher. "[Our developers] think about, 'How does a customer work with the tool? How does it feel? How does it feel when you work for eight hours straight with this tool?' There's a lot of testing."

From initial concept to finished design typically takes Festool four years. You could actually say the Conturo took about six, as there were two years of research capped with a reboot on the project's front end.

The Conturo project started with Festool spotting an efficiency gap, an area for which shops did not yet have a good standardized solution. "Our potential customers are totally used to perfect processes," says Robertine Koch, Festool Communication Manager, "and they are used to the combination of stationary machines with handheld ones; for all applications they can't solve with a stationary machine, they use a handheld one." She rattles off the examples of tablesaws and circular saws, sanding machines and palm sanders, router tables and trim routers. But there was one operation where they found this equation was incomplete.

The gap they spotted had to do with edge banding, where there was an established tradition of stationary machines, but no satisfactory handheld solution. High-end cabinet shops have enormous stationary edge banding machines, like this one: 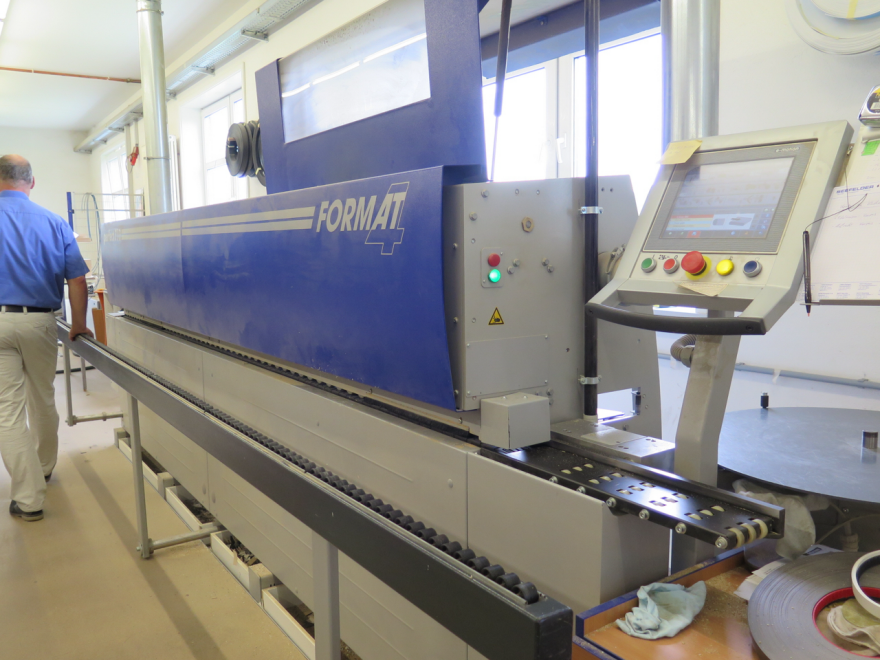 This six-figure beast is made to handle full-sized sheets and will band the edge and trim it flush all day long. Cabinet shops doing production work find the machine a worthwhile investment. The problem is that it can't do curves, rounded corners or bevels. And it sure can't be transported to the jobsite.

To solve that problem, another company had previously invented a handheld edge banding machine. It was being sold on the market, and it wasn't very good. Here's what that machine looked like: 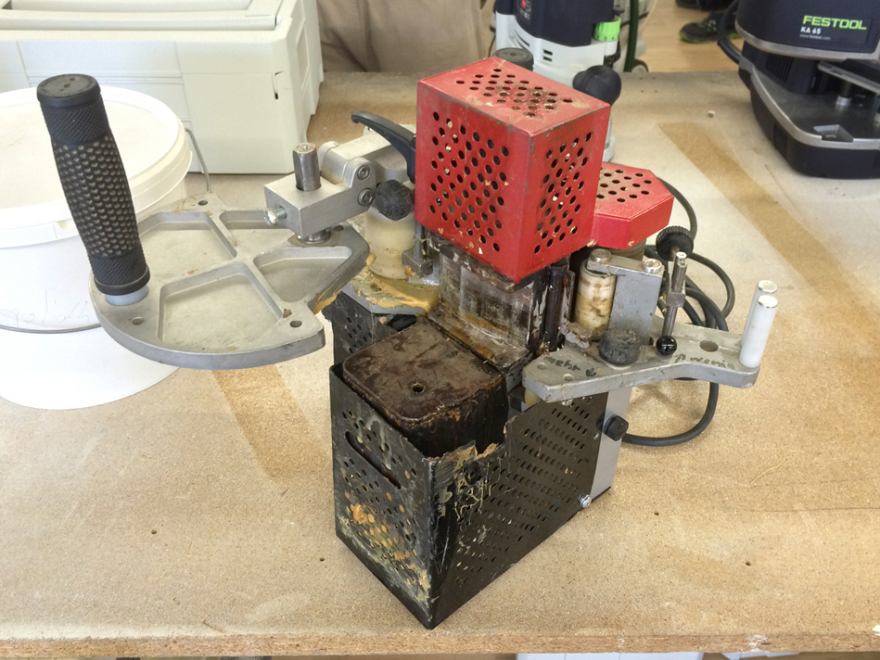 That's not a prototype, that's another manufacturer's actual production model.

In 2008, Festool commissioned two engineering students from Stuttgart's Fachschule für Holztechnik ("School of Wood Technology") to research edge banding possibilities and see how the machine you see above performed.

Their assessment wasn't positive. The machine was clunky to use, ergonomically lacking, messy, and dangerous. The user needed to pour glue pellets into a hopper that melted it down. Figuring out how much glue you needed to insert in order to edge band a particular length was pure guesswork. You'd thus need to err on the side of too much, and keep the hopper full; but left in the hopper too long, the extra melted glue started turning a darker shade, which showed up on the edge banding. The weight balance wasn't optimal, and the hot surfaces of the machine could burn the user's hand. (And while this may or may not have been in their report, as you can see, the machine isn't exactly attractive or professional-looking; would you carry that into a client's kitchen?)

Armed with this research, Festool then commissioned an outside engineer to produce a "constructional concept" based on this machine. Festool wanted to see if they could work with the existing technology to produce a better variant.

They couldn't. By 2010, the development team realized "that this was not the way to go," says Festool industrial designer Timo Kuhls. They couldn't achieve the desired user experience and the desired results with the existing technology. They were going to have to come up with their own solution and something that hadn't been done before.

Four long years later, project leader Reines, his team of engineers, and his sole industrial designer Kuhls (we've got a Q&A with him here) had pulled it off. 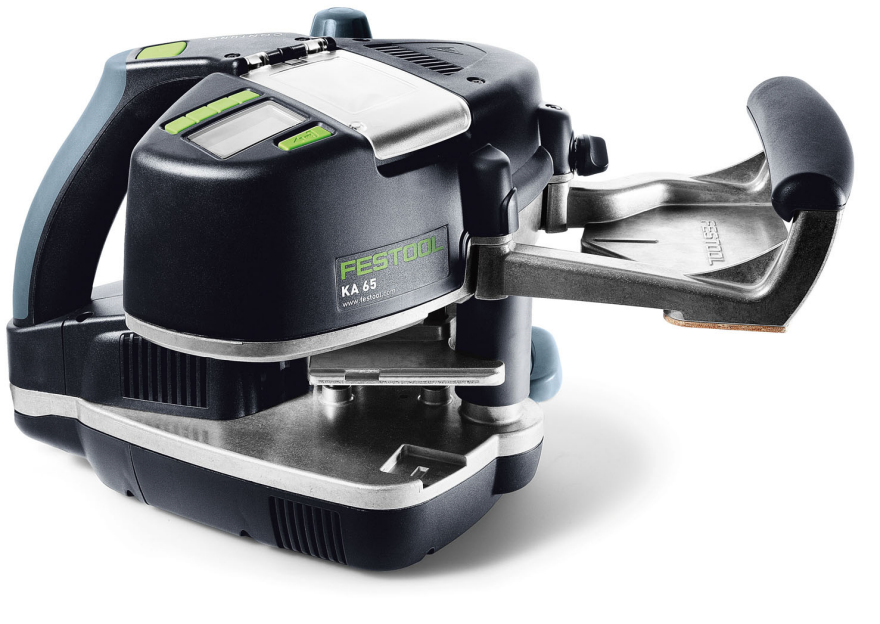 In a conference room on the top floor of Festool HQ, the half-dozen prototypes leading to the final Conturo are laid out on tables for us journalists to see. 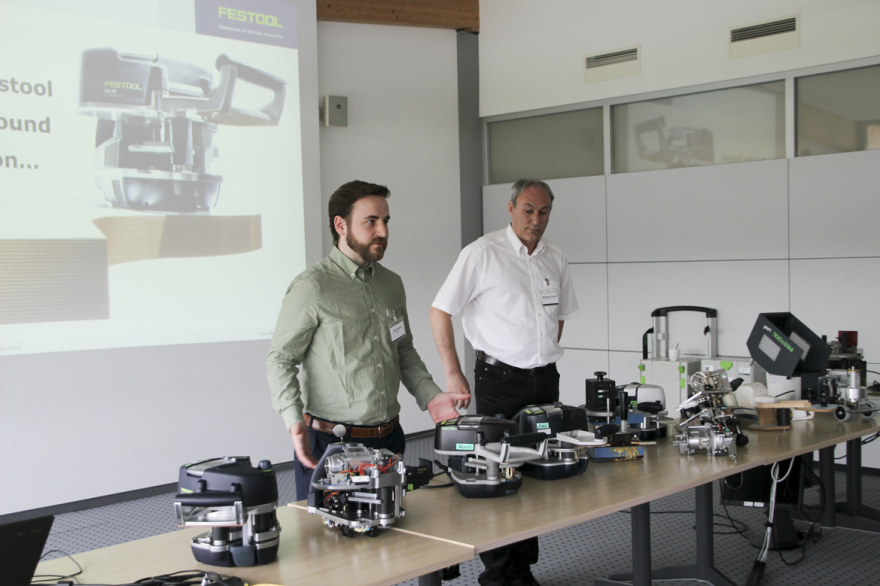 Starting at the far right is a buck made from plywood, styrofoam and plastic, with crude handles attached; this was mocked up at the beginning of the process, prior to the development of the machine's guts, to set the guidelines for what the machine should feel like ergonomically. 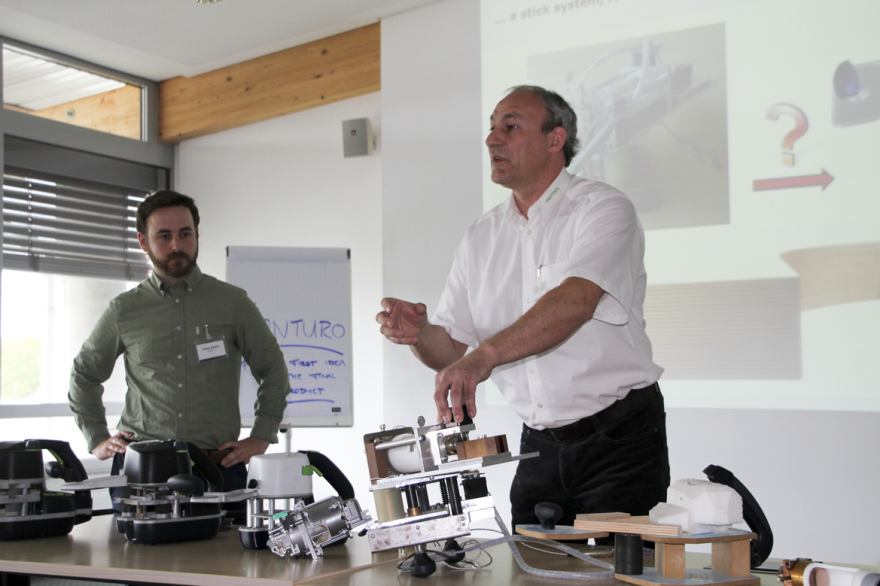 With the form roughly decided upon, the next four years were filled with intensive engineering and "details, details, details," says Kuhl. There were technical challenges aplenty: In addition to removing the burn risk and keeping the machine's physical balance distributed, the team had to carefully consider how a user would operate the machine, and what kinds of feedback they'd need during any given point in the edge banding process. Thus a display screen was added, the first to appear on a Festool product: 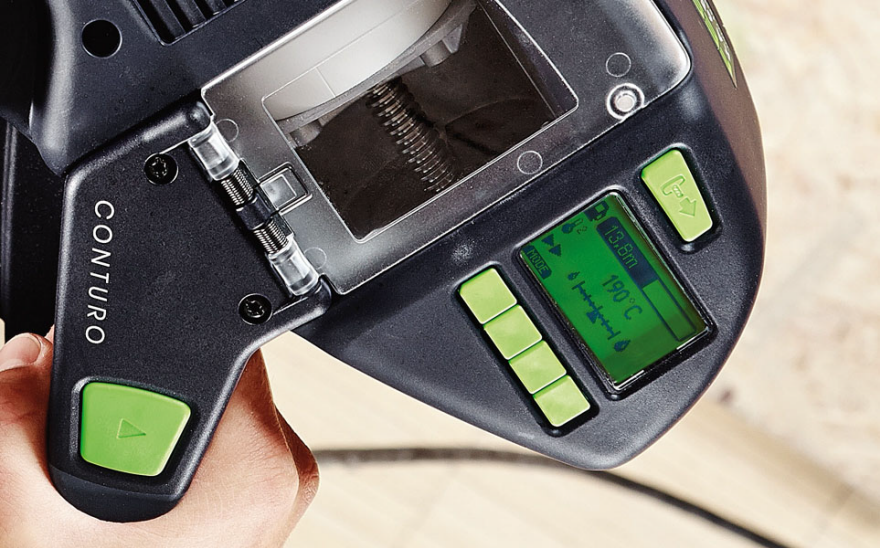 When you turn the machine on, the screen is red, and the internal glue-melting heater turns on. When it's ready to go, the screen turns green. It tells you the temperature setting—the user can choose between two, depending on the glue used—and displays exactly how many more feet (or meters) of edge banding you can apply, based on the amount of glue you've got in the machine. It's also smart: It recalculates that amount if you change the height of your banding (which thus alters the surface area equation).

The glue itself has gotten the ergonomic treatment. Placing a puck into the machine is easier than pouring pellets into a hopper. 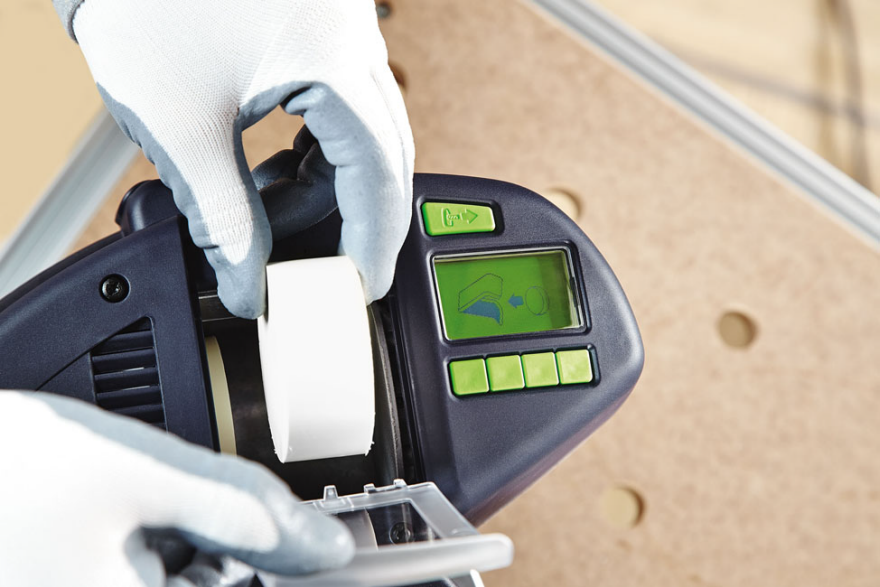 The glue-melting heater is thermally isolated to protect the user from burns. And it only melts the glue required, rather than melting up a hopper's worth. The melted glue is then precisely applied by nozzles in thin, perfectly-distributed strips. 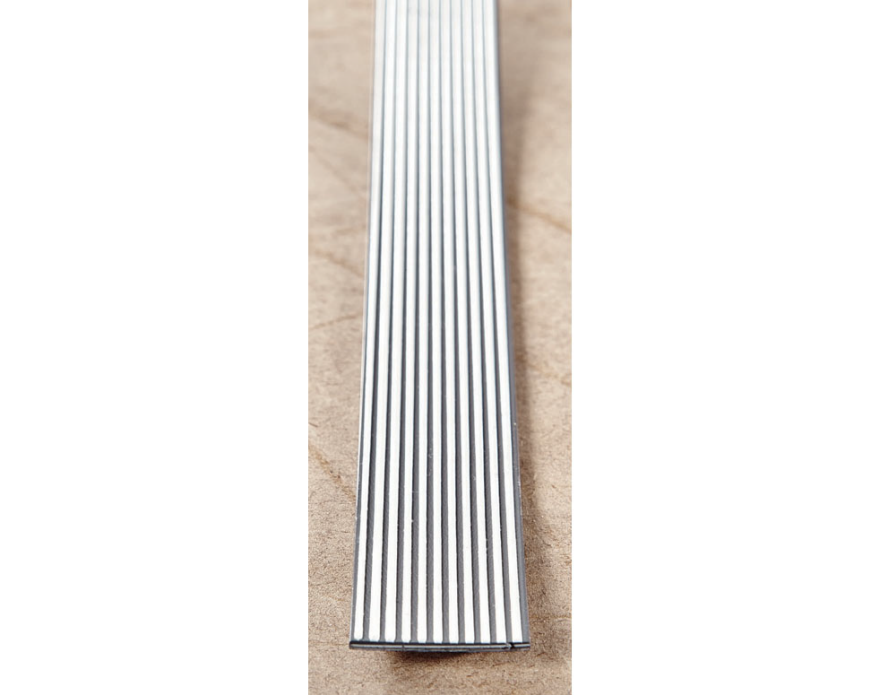 The machine can of course do straight edges as well as curves both concave and convex. Intelligently, the developers have placed a speed-controlling trigger on the handle, so the user can speed or slow the feed rate of the banding (when navigating a curve, for instance). 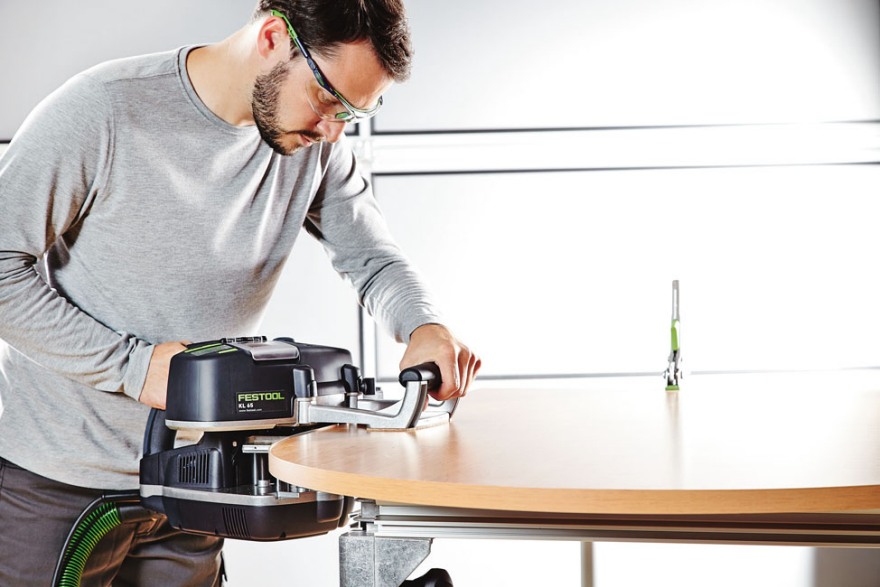 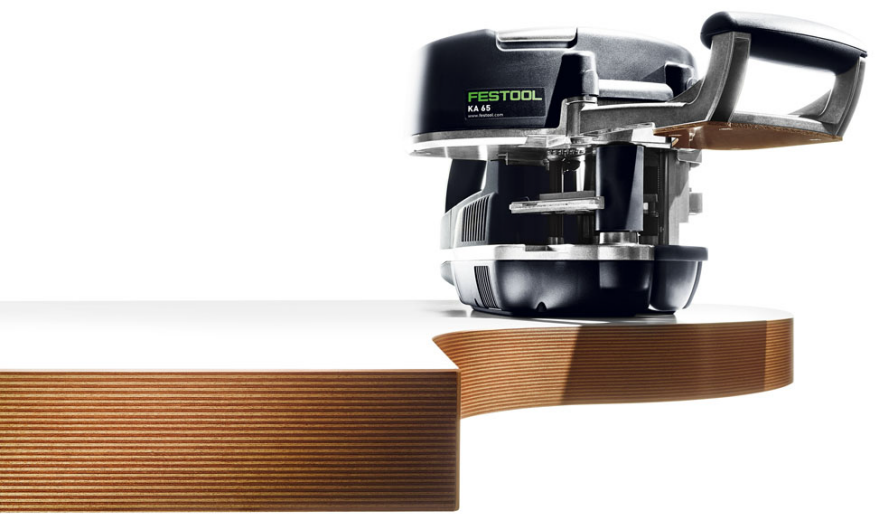 They also ensured the machine could be used upside-down. In this manner it can be mounted in a table, or even at an angle to apply banding to beveled edges. 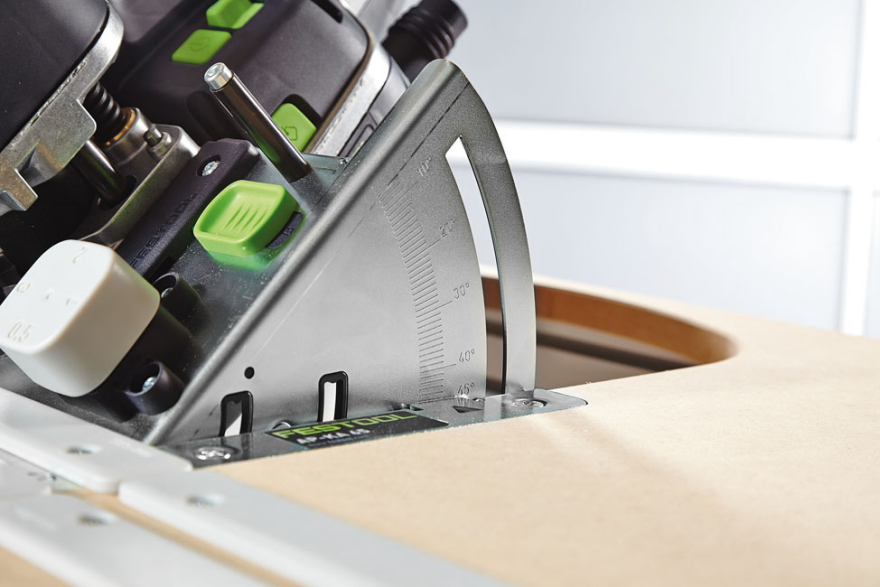 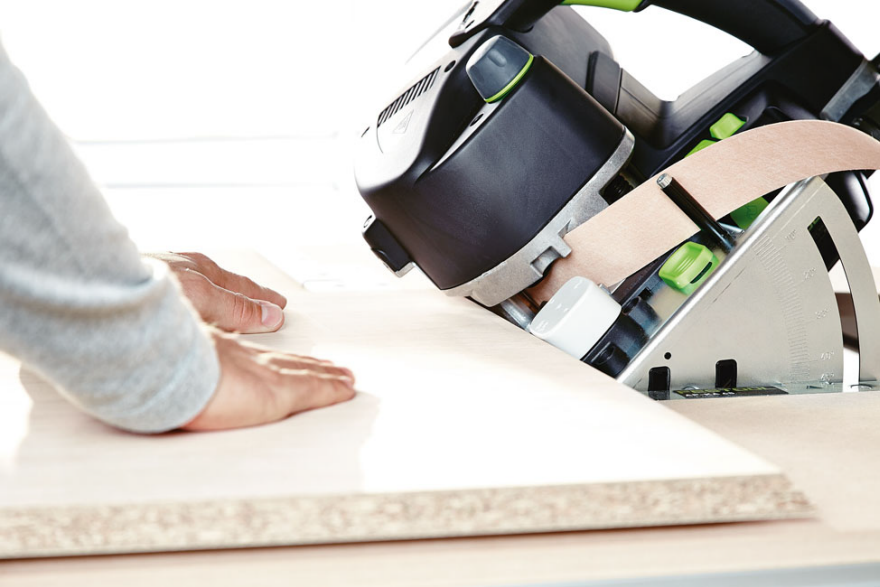 The Conturo is not designed to replace a $150,000 stationary edge banding machine, which does all of its operations in one; it is intended to complement it, doing what the larger machine cannot. Thus once applied, the edge banding must still be clipped at the ends (via a clipper they designed), trimmed flush (Festool prefers you use their trim router, naturally) and shaved (with a hand scraper they developed that features different radii). 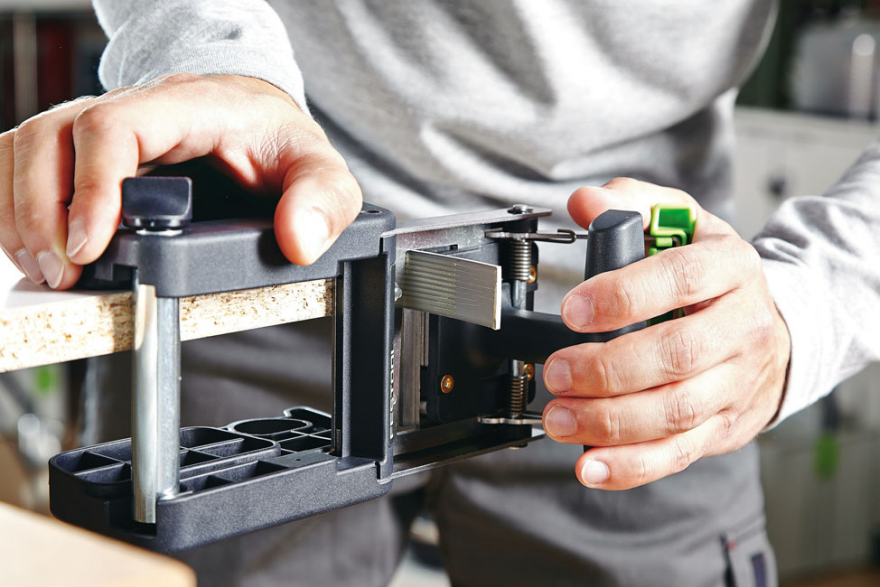 Clipping the end of the banding off 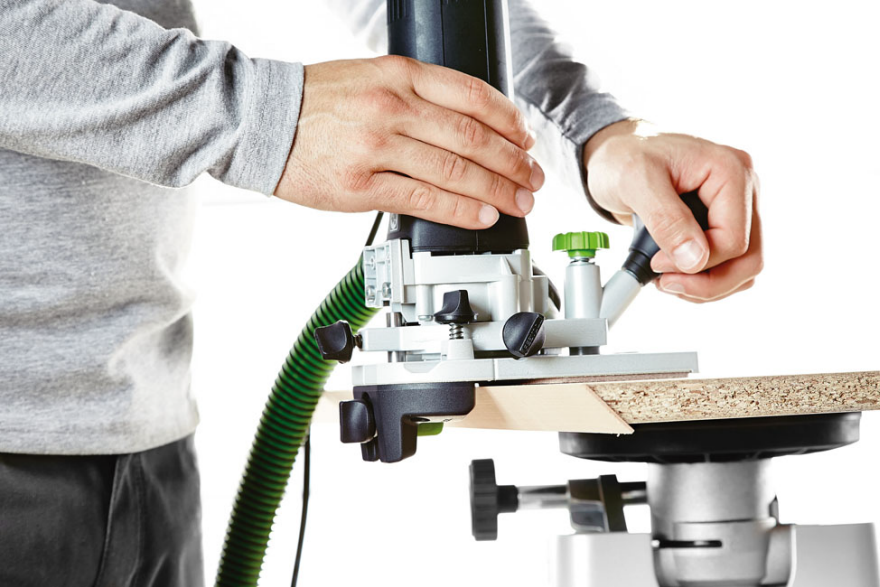 Trimming the banding flush to the surface 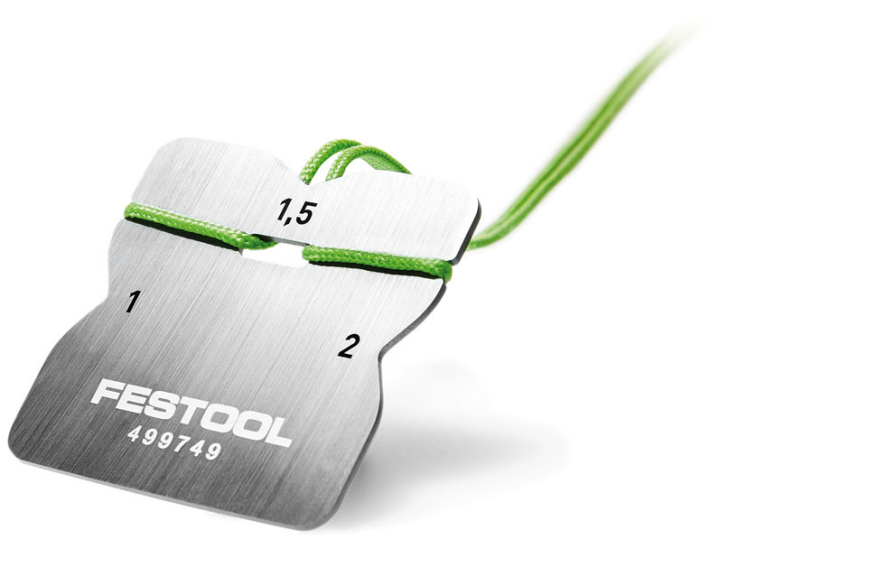 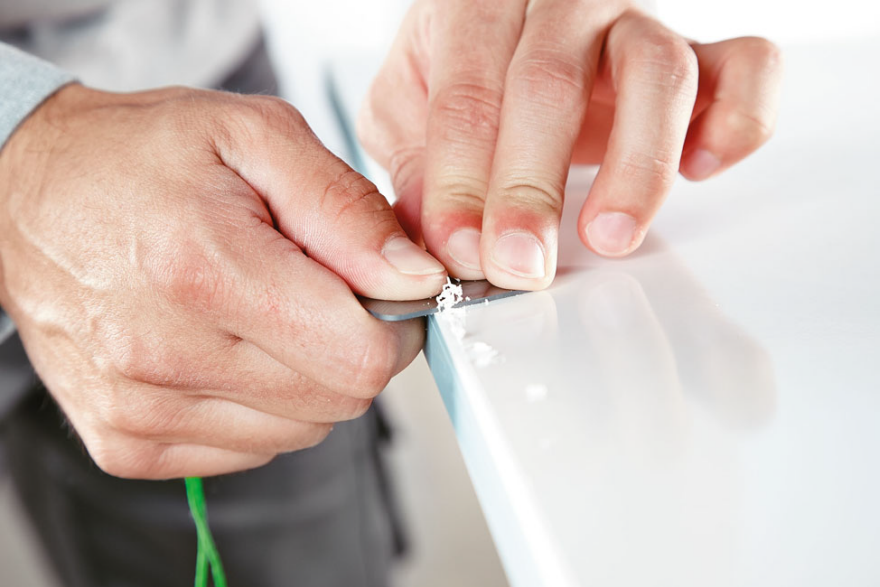 The scraper in action

However, it's possible that a smaller shop that can't afford the six-figure asking price for a stationary machine would conceivably use the Conturo alone. And for tradesmen edge banding on-site, it seems an obvious home run. The Conturo retails for $2,800 alone, or $3,200 with all of the accessories; the competing prototype-looking machine we showed you above is still on the market—for $3,500.

And it appears the company was correct in anticipating the demand. "Before, we were thinking 'Okay, how can we sell this product? It's going to be difficult to explain it,'" says Leonhard Zirkler, Festool's Business Development Manager. "So we were surprised by the success of this product—it sells easier than we expected. The reaction from the customers is enthusiastic, and since our European market launch, the word of mouth has been quite strong." Following its successful launch in Europe last year, the Conturo was imported to American shores earlier this year. 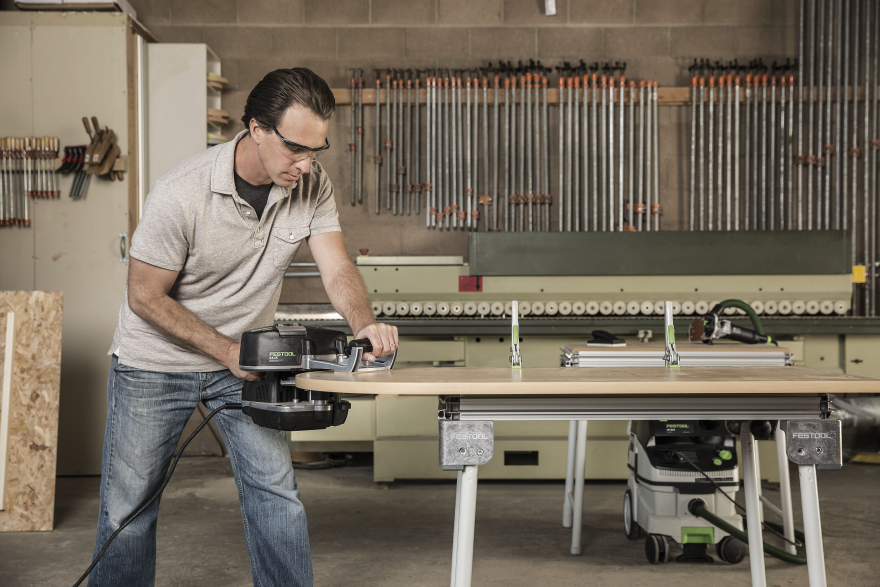 Zirkler understands that the marketing challenge with a tool as sophisticated as the Conturo is explaining all of its features without overwhelming the end user. For that reason, the company set up multiple demonstration events at dealerships where customers could try the machine in person to see how easy it is to use. (I tried the Conturo myself during the trip, with no experience in edge banding at all; I nailed it on the first try. The Conturo is incredibly easy to use, which I would not have gathered until I put my hands on it.)

"It's very important to bring the machine to the customer and to demonstrate this solution," Zirkler says. He presumably knows that when the target market gets their hands on one, they'll walk out of the store with one.

"And most importantly here, we don't sell an edge bander. We sell a perfect edge. We sell a whole system. We solve the problem for the customer."