Chinese Design students and DIYers tackle the challenges of living in a rapidly changing city of 20 million residents and counting.

Design schools have long taken to their hometown design festivals to capitalize on a broader audience for their work, and the China Central Academy for Fine Arts is no exception. From the Visual Communication department's “Museum of Bicycle Parts” in 2013 to last year's Industrial Design student showcase “Everyday Issues,” the renowned institution is slowly but surely ramping up its presence at Beijing Design Week. In addition to the second edition of the latter show, Professor Fei Jun of CAFA's Digital Media Lab spearheaded a pop-up makerspace in the hutongs of Baitasi in collaboration with a few other organizations.

In the case of “Everyday Issues (Continued),” the research-intensive projects offer insight into the fast-changing culture of Beijing at large; the Making Hub, on the other hand, captured the global DIYer/maker spirit — eight teams were wrapping up at 48-hour hackathon when I visited — with a Chinese twist. And, as in design fairs the world over, these kinds of exhibitions offer a glimpse of young, local design talent, so here's a survey of what they're up to in the academy and on the ground. 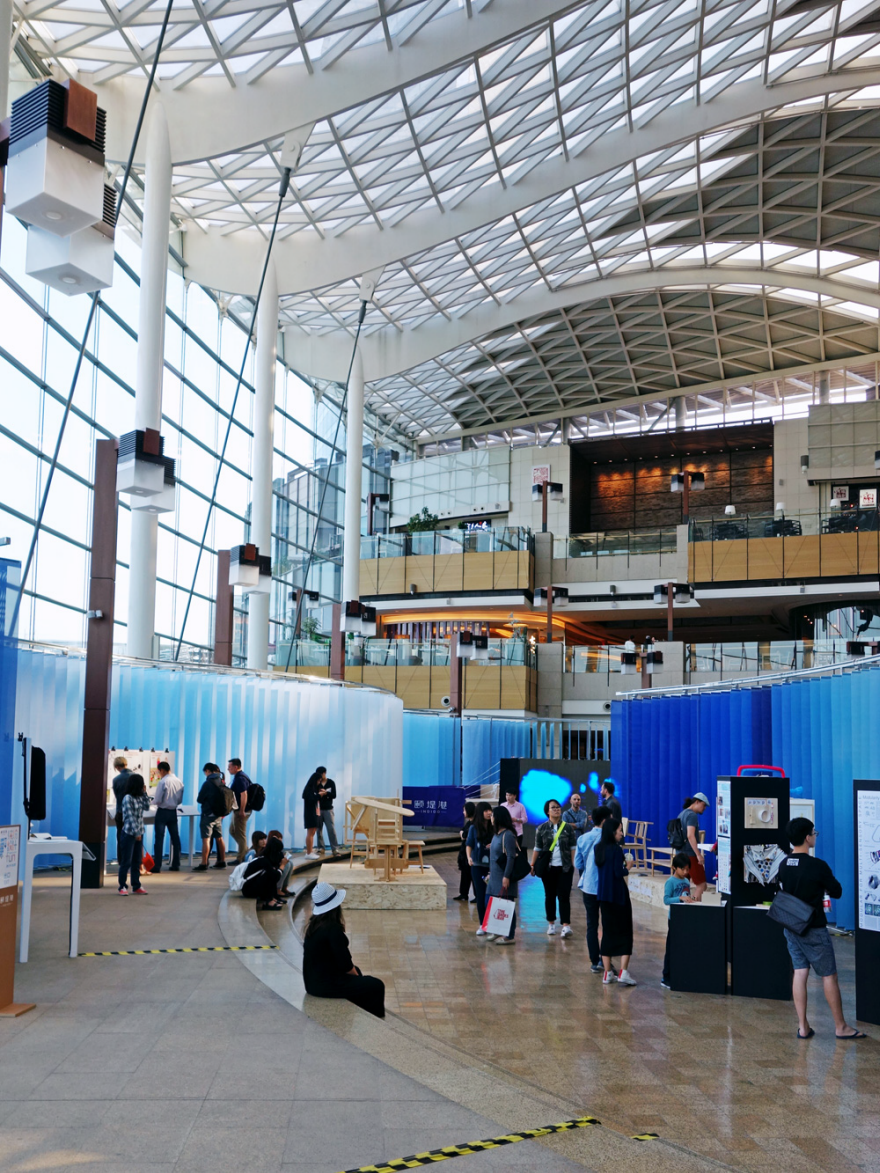 The Winter Garden at Indigo Shopping Center. "Everyday Issues (Continued)" was on view along the wall at left.

In the interest of reaching a broader swath of the Chinese public, A4 Studios relocated their curated exhibition from Caochangdi to the more accessible Indigo shopping center, where the mall-wide exhibition was anchored by a pop-up gallery in the Winter Garden. In addition to a number of independent design studios, Ben Hughes has staged a sequel to last year's successful CAFA exhibition. As in last year's exhibition, he tasked his students with a brief to tackle real-world problems to develop contextually relevant solutions based on their ethnographic research efforts.

(Although the displays were smaller — and denser — than those at Naihan Li's Caochangdi studio space last year, they were no less interesting.) 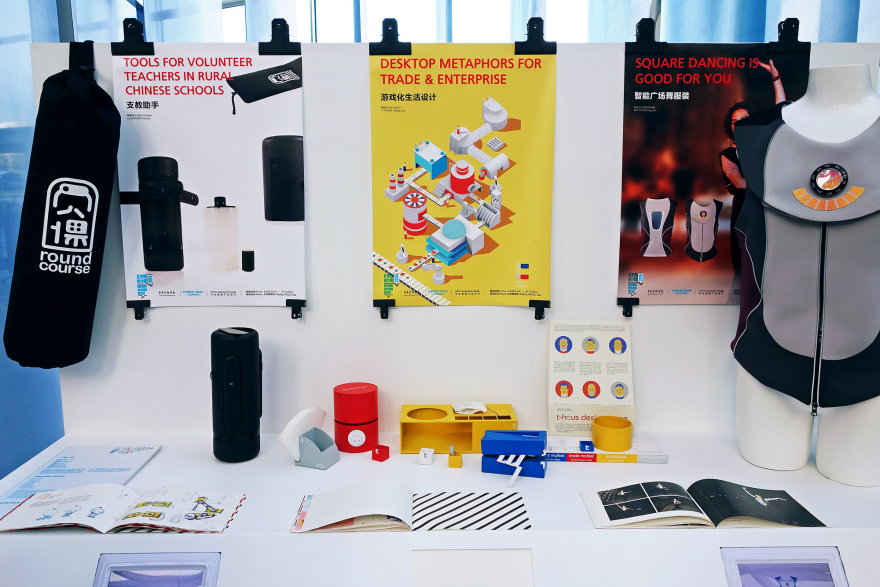 Having volunteered as a teacher in rural Guangdong, Chen drew on his experience to design a toolkit with a 360° projection screen and a thermal printer module in a carrying tube. These relatively inexpensive items enable a circular classroom configuration, for which the designer has also developed several interrelated activities.

This set of fun and functional office accessories was inspired by Buckminster Fuller's World Game and can actually be "played" as a game to encourage users to maximize efficiency.

Li PengHao – Square Dancing Is Good for Us

Li's project speaks to the trend of “square dancing,” in which older citizens take to public spaces for dancing sessions. “Recently it's been vilified in the media as being a public nuisance because of the noise pollution,” relates Hughes, “which is incredibly upsetting because it's such a brilliant way for them to get exercise.” This vest has built-in speakers atop the shoulders and gyroscopic sensors to provide feedback on the accuracy of the user's movements. “The holy grail is to get younger people doing it because it's seen as a very elderly activity.” 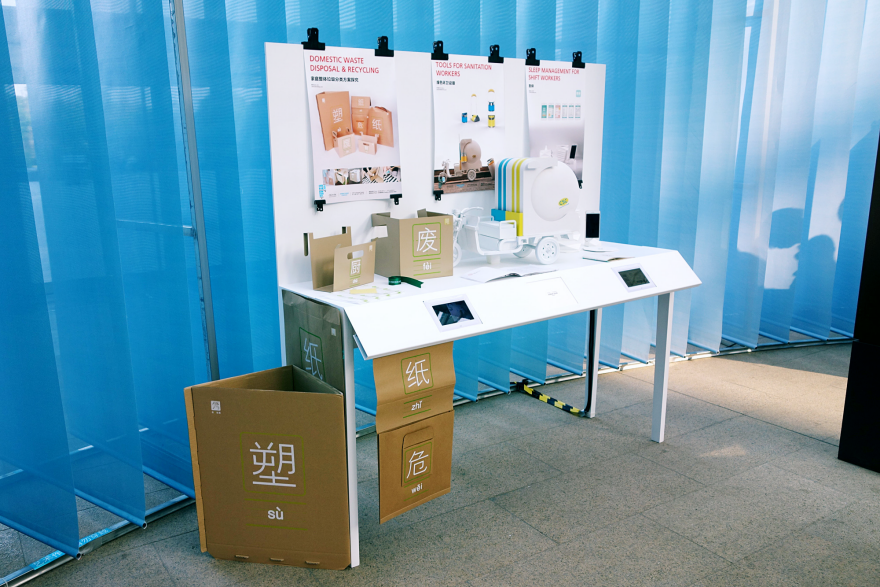 Given that recycling is gaining traction in China, Guo has anticipated the next step: separation of household waste, researching users' waste-disposal patterns and habits. The result is a suite of specialized receptacles for different rooms — office, kitchen, living room — that correspond to the types of waste in each area of the home. Hughes relates that there has been some interest in the project: “She got sponsored by a local community in Shanghai, so she's prototyped and produced 500 sets of this, and they're trying it out in this series of residential towers.”

Noting that Beijing's sanitation workers are underappreciated despite the importance of their role in maintaining and beautifying the city, Shi has designed a series of products and equipments that allow them to take more pride in their work.

From taxi drivers and factory workers to nurses and policemen, shift workers typically find themselves fatigued on the job due to irregular sleep patterns. This device employs color, movement and light to promote the best sleep cycle, as well as dispensing timely herbal remedies. 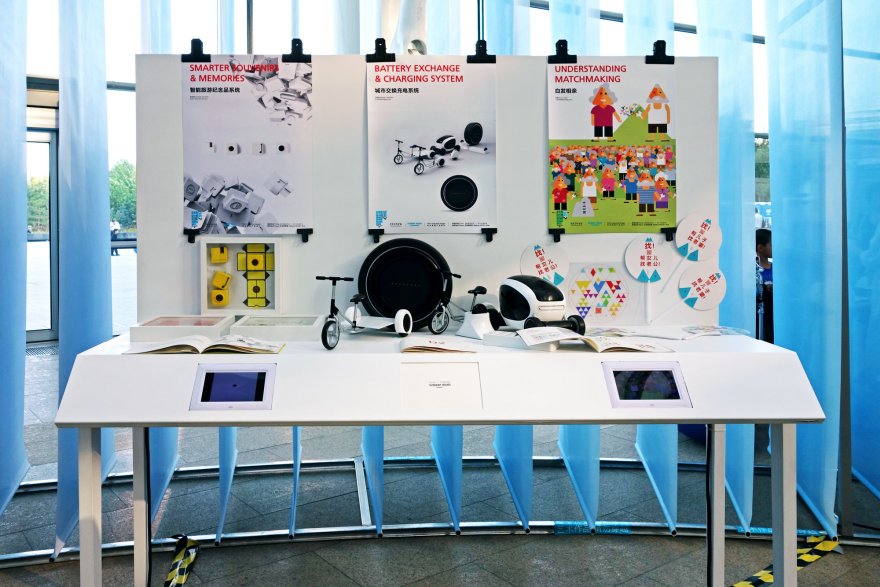 Although smartphones offer great potential for documenting one's holiday and vacation experiences, it can be difficult to organize and share multimedia from the experience. “These are kind of like souvenirs, digital fridge magnets that contain information that's created by you and your mobile phone, but it's taken off your phone and kind of made more real.”

Thousands of manufacturers are producing the electric vehicles that clog the streets of China, yet it there is no standard charging procedure or technology. From bikes to cars, millions of battery-powered vehicles demand a solution. This modular wheel solution is a wheel-sized rechargeable battery pack that can power (or even function as) a personal mobility device with anywhere from one to four wheels.

Hughes admits that "this is my favorite one of the whole lot," briefly describing China's long history of matchmaking that is increasingly at odds with the culture of independence of the current generation. “This girl researched contemporary, emerging matchmaking cultures. They have fairs, almost like trade fairs, in parks, where grandparents go to post advertisements for their kids, on the floor.” Thus, Liu developed an app, for which marriage-age youngsters can create a profile, which is then printed as a kind of abstracted pattern on a fan. The grandparents can then bring these fans to the park to make a match. 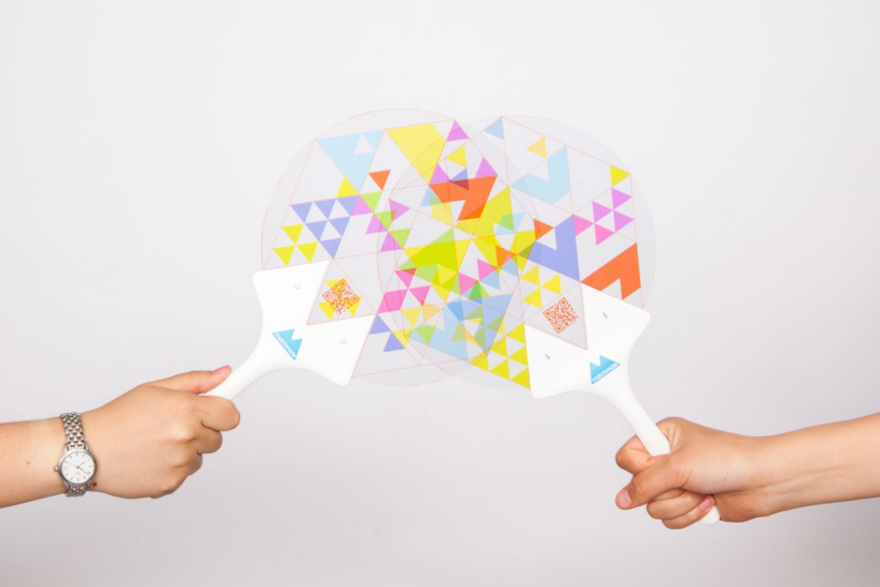 “The main insight is that matchmaking is not a problem with the kids meeting each other,” Hughes continues. “The matchmaking problem is the intergenerational problem, of pressure from the grandparents and the parents, and this really goes a long way to solving that in an interesting way.”

The Making Hub at Baitasi

Meanwhile, the innovators at the Making Hub also tackled quotidian concerns, albeit in a more compressed timeframe as they brainstormed and prototyped concepts on-site, in a warren of brightly colored rooms in a quiet corner of Baitasi. Led by Moujiti (a.k.a. Fei Jun) and Interactive Beijing in partnership with Shenzhen-based Seeed Studio, the Making Hub is billed as an “innovation platform equipped with open-source digital and fabrication tools.”

The program aims at pursuing the challenges of co-creation and future living as inspired by the urban and social context of Baitasi in relation to the efficacy of new forms of applied thinking generated with new production technologies and motivated by a collaborative spirit of making. 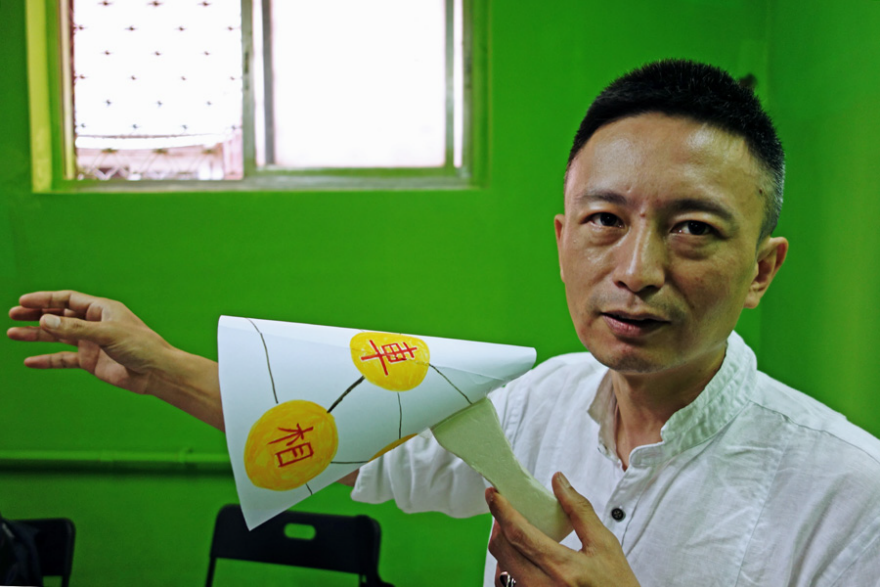 Fei Jun demonstrates a skeuomorphic "opinion collector," into which Hutong residents can voice their opinions and complaints, which are then digitized and aggregated at a community center. 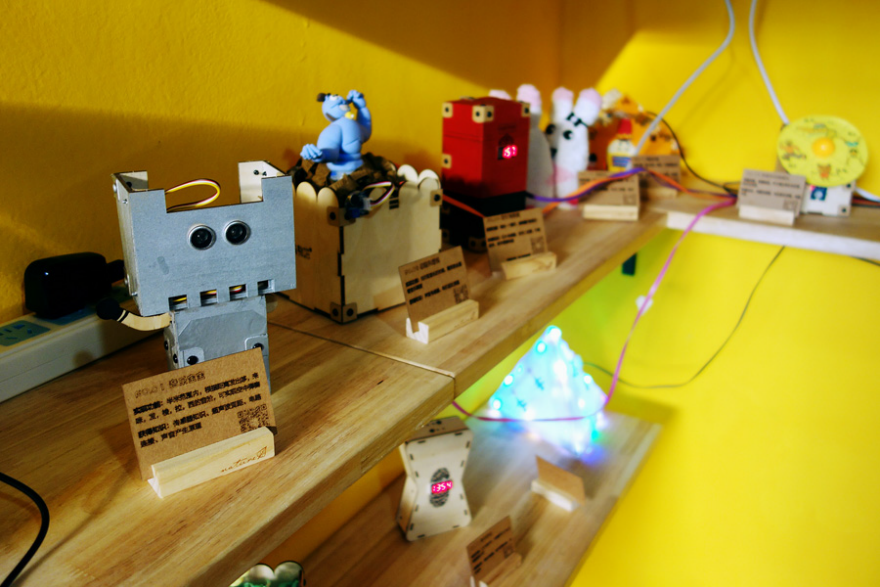 The DIY toys, made with Little-Bits-like electronics kits, are popular among the neighborhood children. 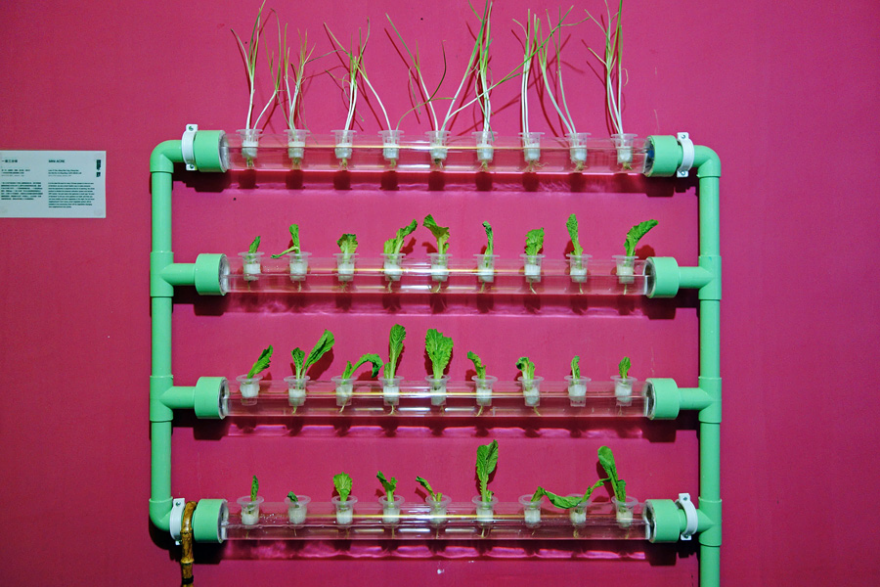 A wall-mounted hydroponic system (monitored and controlled by app) allows city-dwellers to have a garden.

Intended to be a community space as much as a design studio, the hub kicked off with a hackathon in which various teams addressed residents' problems. It's a familiar scene: folding tables strewn with circuit boards and soda bottles alike; coders hunched over laptops; the telltale whir of a 3D printer, cranking out iterative prototypes in the background. In contrast to the polished models, mock-ups and maquettes of “Everyday Issues (Continued),” these bits and bobs represent earlier stages of the design process. 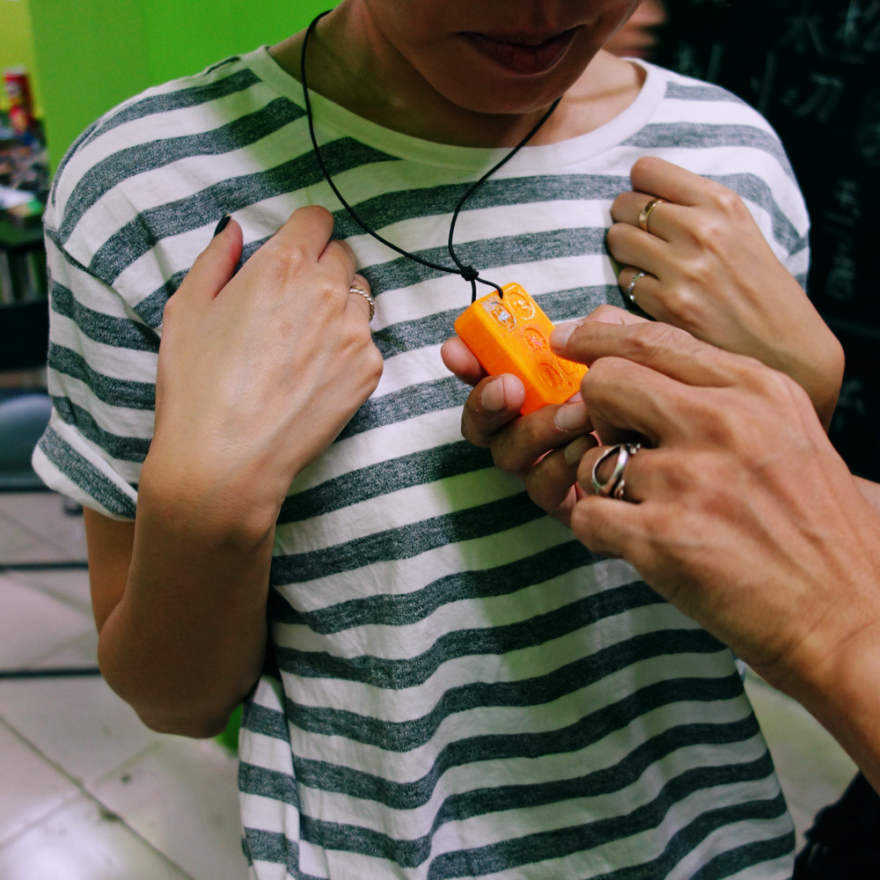 Based on a Mahjong tile, this dedicated device for socializing will broadcast whether the user is looking for fellow users to play Mahjong or cards, share a meal, etc. 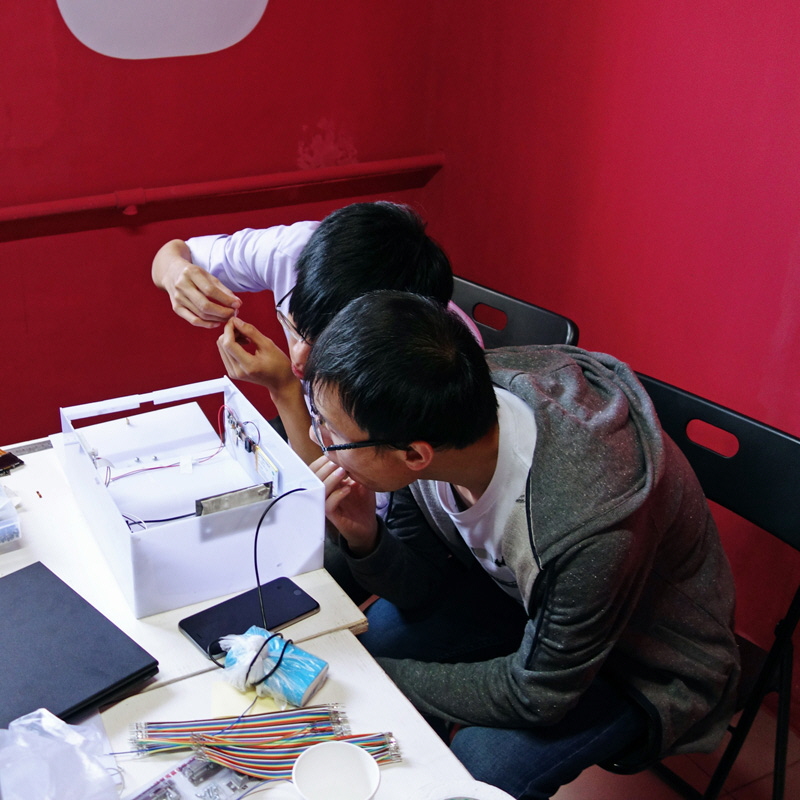 While snail mail is increasingly obsolete, physical addresses remain paramount for deliveries and wayfinding. This smart mailbox notifies the user about deliveries via app. 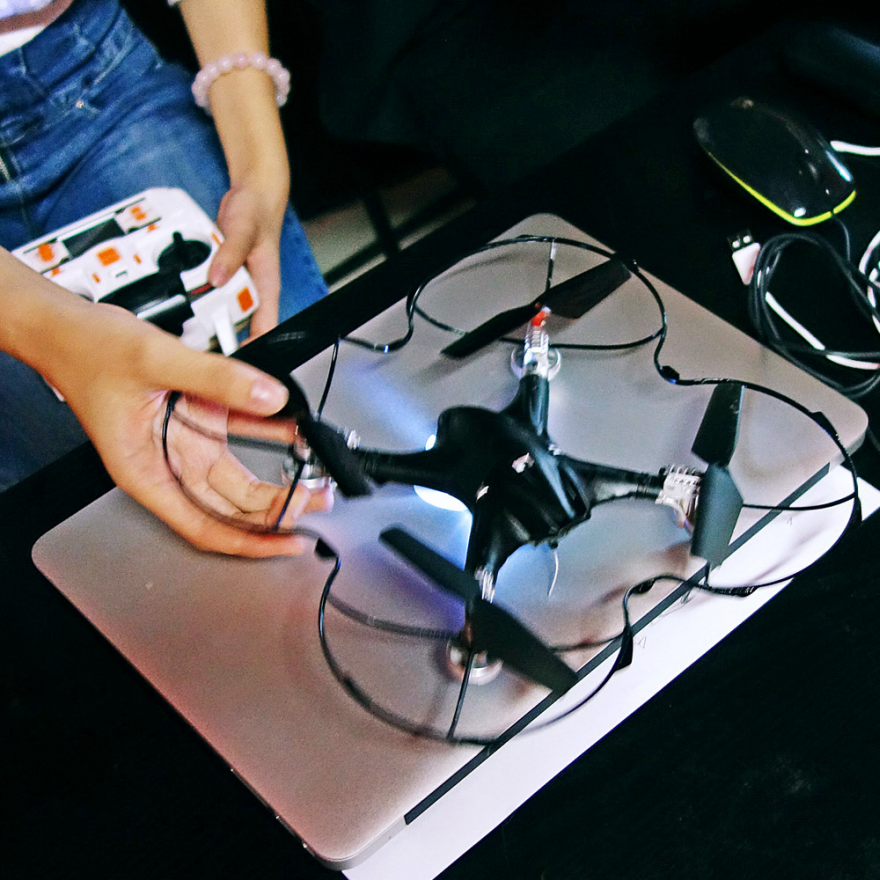 This personal drone is intended to guide women home at night. Programmed to fly just in front of and above the user, it provides illumination and security, as it can notify family, friends, or the police if it detects a threat. "It's called 'Flying Boyfriend,'" Fei jokes, "but it's more useful than a boyfriend, actually."

All told, these projects — a dozen and a half in all — collectively show just how China's designers are looking to make a difference in their communities. From CAFA to the maker hubs popping up in cities across China, designers are bringing their talent to bear on contextually sensitive solutions to the problems faced by upwards of millions of workaday Chinese.