Even as the mall meets its demise in America, the one-stop retail megaplex rises anew, bigger and better than ever, in the Far East, with the gravitational pull to bring design week into its purview.

The narrative is altogether too obvious; the artlessness fitting, in some ways, for China, but all-too-easily misinterpreted: After three solid years exhibiting in a quiet artist's village, one of Beijing Design Week's more eclectic offerings had forsaken its home to relocate to a generically ritzy shopping mall. But considering that Parkview Green — another luxe shopping center that expressly differentiates itself with contemporary art exhibitions all year round — is also participating this year, it is worth taking a moment to reflect on why, exactly, exhibiting in a shopping mall is a contextually appropriate solution for a design exhibition in China. 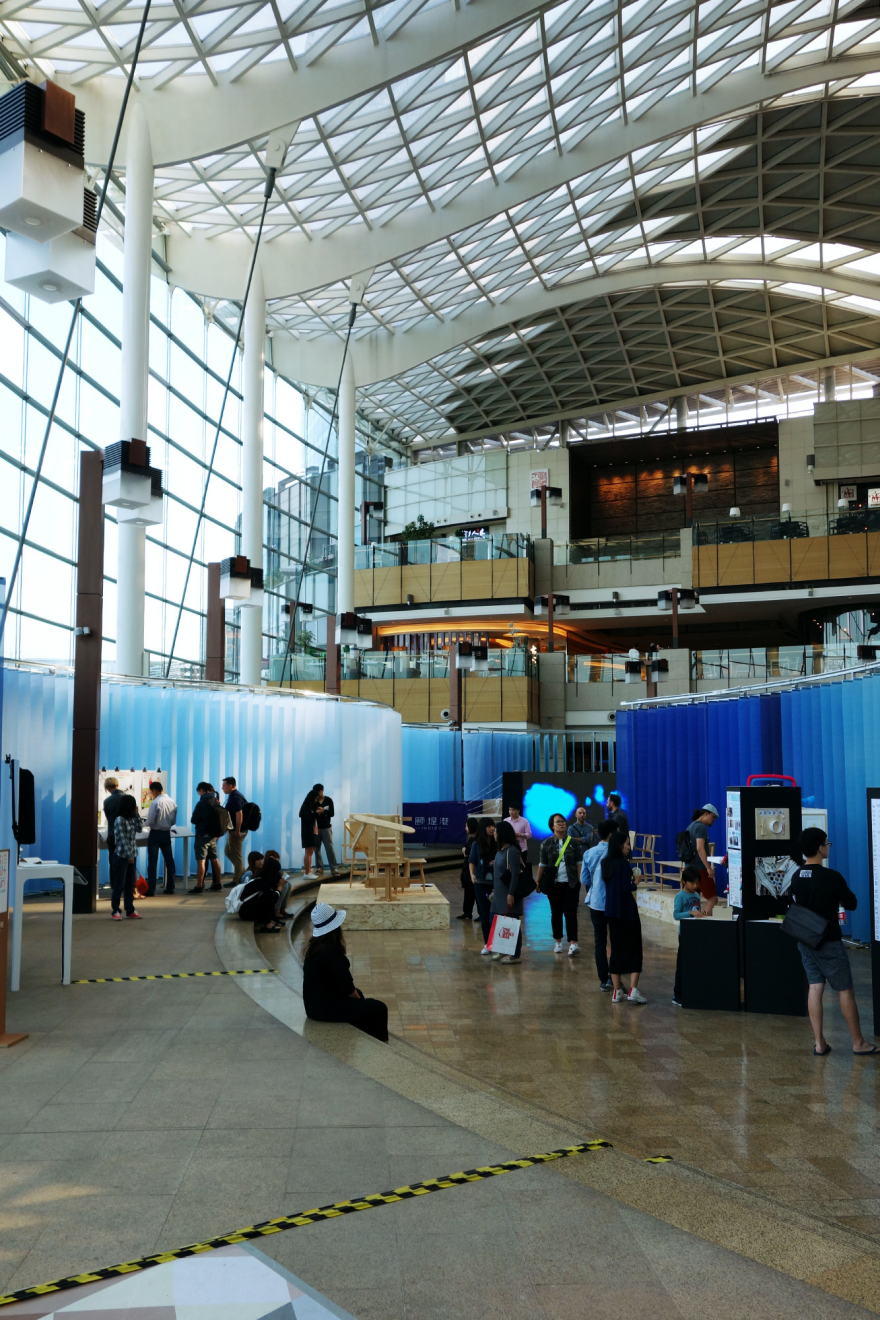 Case in point, the first example: I was initially surprised to learn that the tight-knit CaoChangDi design community (originally established by none other than Ai Weiwei some 15 years ago) would not be reprising their well-regarded exhibition on their home turf but rather at the multilevel retail concourse of INDIGO Mall. Even so, if this bizarro-world epiphenomenon is attributable to the rise of consumerism in China, it is less a case of selling out as it is a symptom of contemporary Chinese culture.

In some ways, it is a kind of reaction, a knowingly subversive ploy to infiltrate the system. Given curator Ben Hughes' evergreen intentions, the temporary colonization of Indigo is best construed as a means of hacking urban space, meeting the everyday citizens halfway, at a popular venue where an unsuspecting public might stumble across a proper design week exhibition. A destination in itself, INDIGO is both familiar and accessible to the vast majority of the populace — especially compared to an artist's village on the outskirts of the city, tucked in an otherwise unremarkable residential pocket of northeast Beijing. 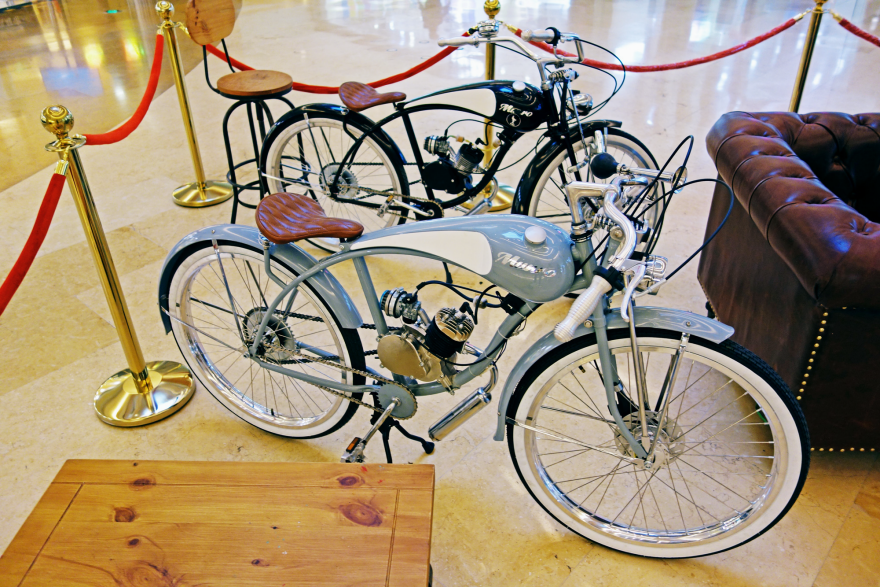 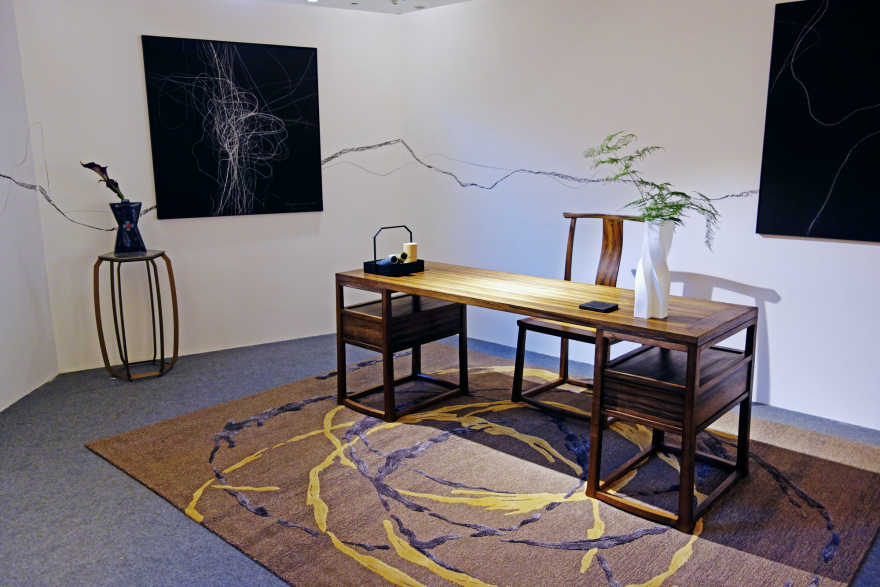 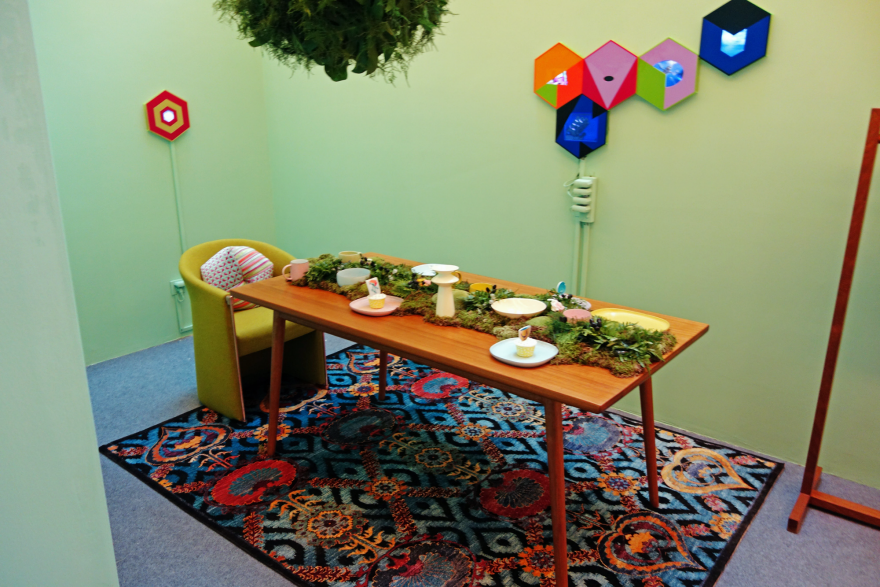 And to its credit, Hughes spoke highly of mall management: Indigo is owned and operated by multinational developer Swire Properties, which boasts tens of millions of commercial square footage in mainland China and Hong Kong, where it is based. Moreover, Swire's recent development efforts have a cultural dimension, and the “INDIGO – Designed to Delight” exhibition is simply the latest manifestation of this strategy. Cynicism about the high-end property developer's agenda aside, Hughes and his team at A4 had a high degree of creative control and were well aware of what they were getting themselves into.

Working with Indigo has given us the opportunity to re-imagine some familiar spaces in unusual ways. Temporary installations within shopping malls are typically heavily commercial in nature. We hope that our designers' exhibitions will give visitors the chance to experience the space in a different way.

Of course, the wider audience comes at the expense of the focus afforded by non-commercial environs: even within the largely self-contained “Symphony in Blue” pavilion in the Winter Garden, the porous walls intended to invite mall patrons but inevitably permeable to the sights and sounds of the multi-story food court surrounding it on three sides. The pop-up exhibitions throughout the rest of INDIGO similarly suffer from the supersaturated backdrop of window displays and bombastic signage. 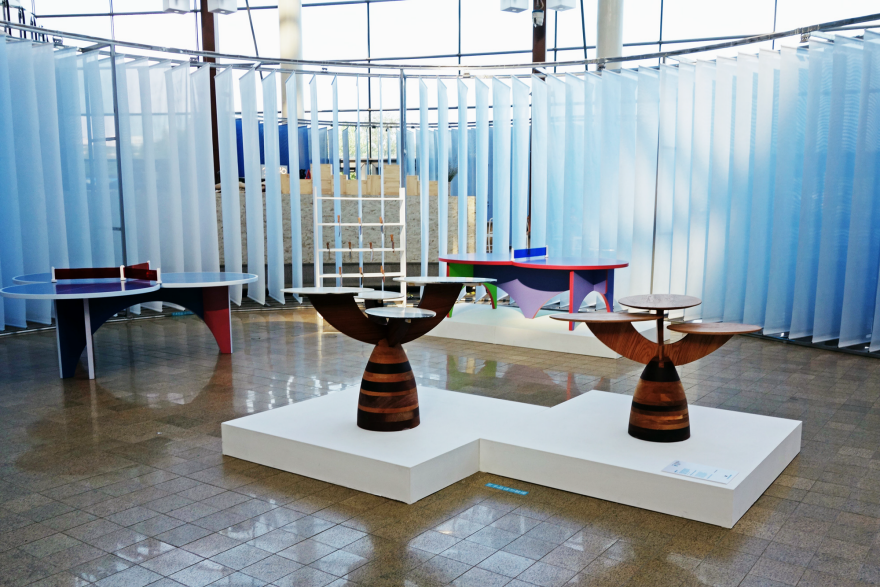 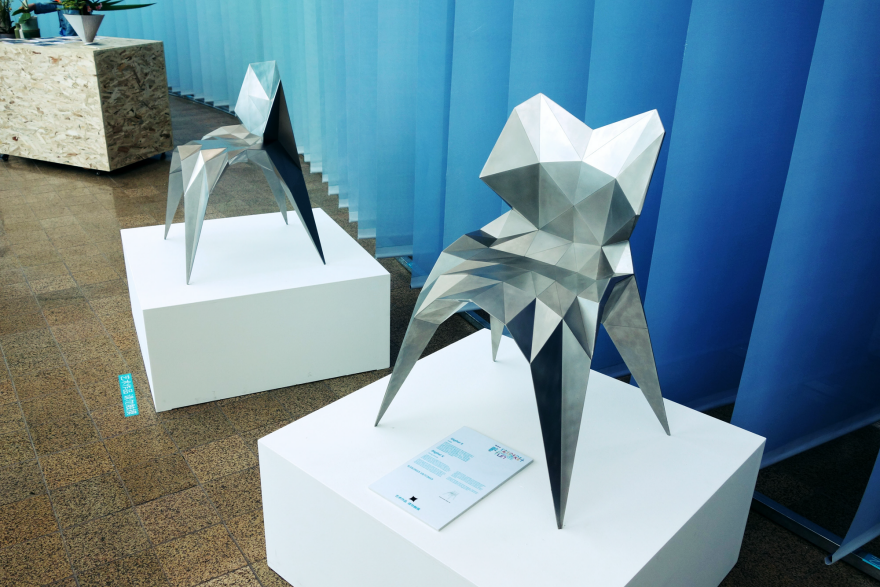 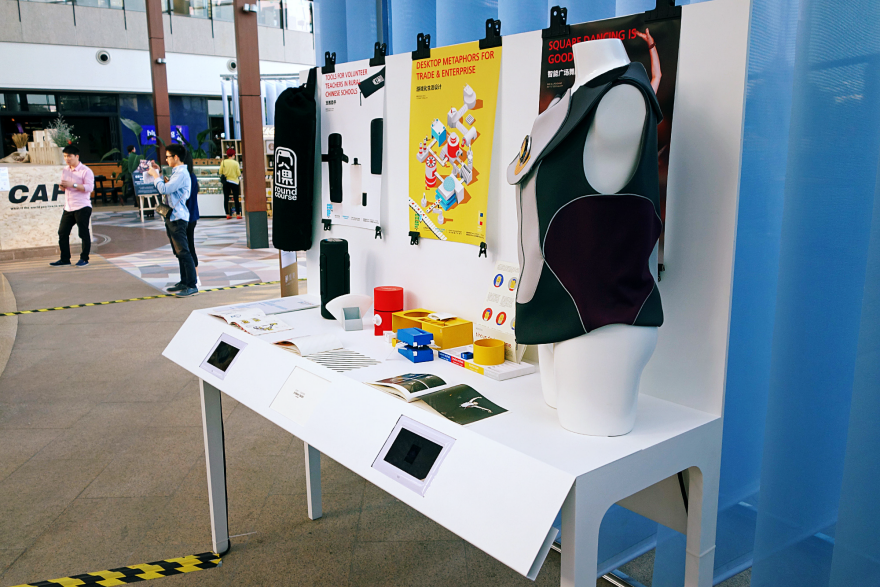 Nevertheless, it seems that visual cacophony is the norm for Chinese city-dwellers — middle-class mallgoers and nouveau riche collectors alike. One of Swire's competitors, New World Development, opened the first K11 Art Mall in Hong Kong in 2009, set the precedent for the hybrid temple of art and commerce. By last January, M+ Museum's Lars Nittve (a colleague of BJDW's founding Creative Director, Aric Chen) expressed his reservations about the rise of the art mall in China and beyond; from a South China Morning Post article:

“Artists don't make art to fit in malls. Artists make works of art for different types of spaces, usually discrete and distant from the ambience of commerce. ”

But retailers have more leverage because of a lack of exhibition space around the city.

“It's more challenging in a city where you don't have lots of opportunities to exhibit in proper exhibitions spaces... We struggle all the time to find spaces to do exhibitions. I'm sure this gives malls in Hong Kong an upper hand. Artists are satisfied with less than they would be in, say, in London.”

Conversely, Beijing's 798 Arts District has endured the opposite, as the last few years have seen property owners capitalizing on its status as a tourist destination, leasing newly inflated commercial space to retailers, brands and companies looking for a bit of cachet. While it's no coincidence that INDIGO is actually a short walk from 798, it's worth noting that Ai Weiwei himself would hang out at that very mall, during his otherwise idle days of house arrest — equally at home in his former stomping ground and the newer establishments that his efforts have indirectly attracted, some two decades later.

It's perhaps too optimistic to depict it as a rising tide, lifting all boats, but suffice it to say that the status of art and design remains subject to the whims of a still-nascent market and consciousness; there's no crystal ball, but at least the annual pulse of Beijing Design Week serves as a useful barometer. 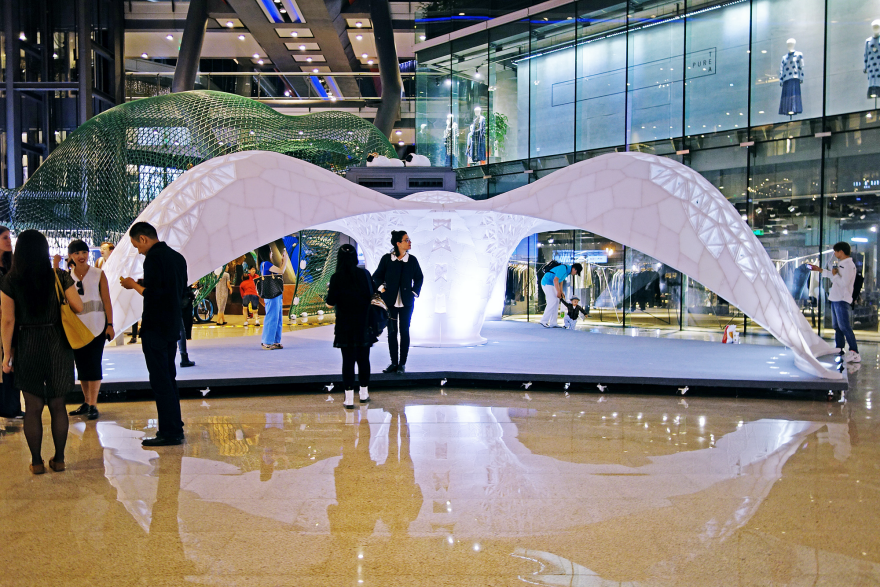 It was not surprising, then, to see another shimmering shopping center offer a design exhibition of its own. Run by yet another developer, Parkview Green is both a mall and a gallery, with rotating permanent exhibitions of artwork from the private collection of owner George Wong, a Hong Kong real-estate mogul. Known in Chinese as FangCaoDi, the LEED-certified glass demi-pyramid hosted a special exhibition, apropos design week, of its own, anchored by a 3D-printed pavilion. Designed by architects Yu Lei and Xu Feng of the Laboratory for Creative Design (LCD), the freestanding canopy — created with bespoke software — is made of over 1,000 unique panels, produced on 20 FDM machines of Yu's own design in the ten days leading up to design week. Lo and behold, the 8.08m-diameter structure earned the Guinness World Record for largest 3D-printed structure. 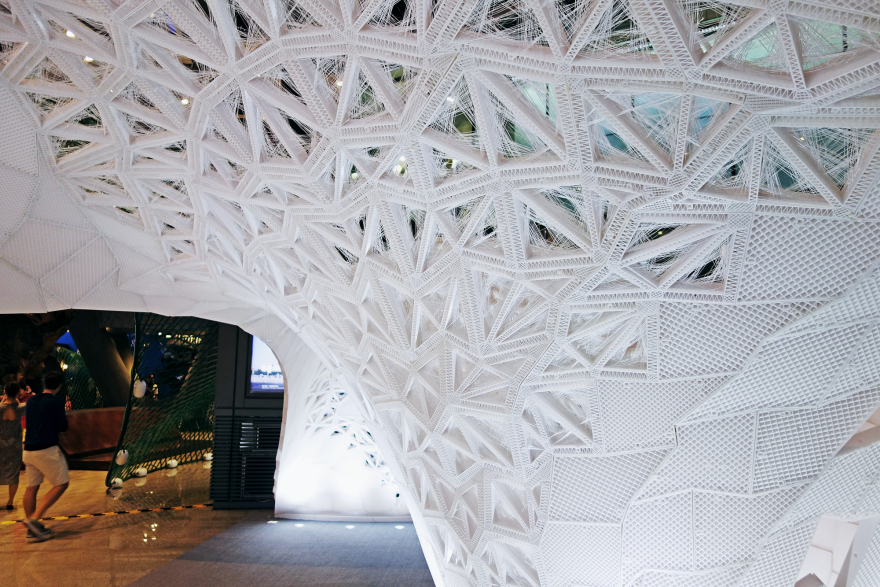 Back in INDIGO, Hughes mentioned that Swire, too, would be keeping at least one of the pieces from “Designed to Delight.” Acknowledging the lack of seating in shopping centers, where idling is discouraged, Hughes explained that Lin Jing's “Ridiculous Bench” speaks to the Chinese proclivity to adapt objects at hand as stools, a riff on psychologist James Gibson's notion of affordance. 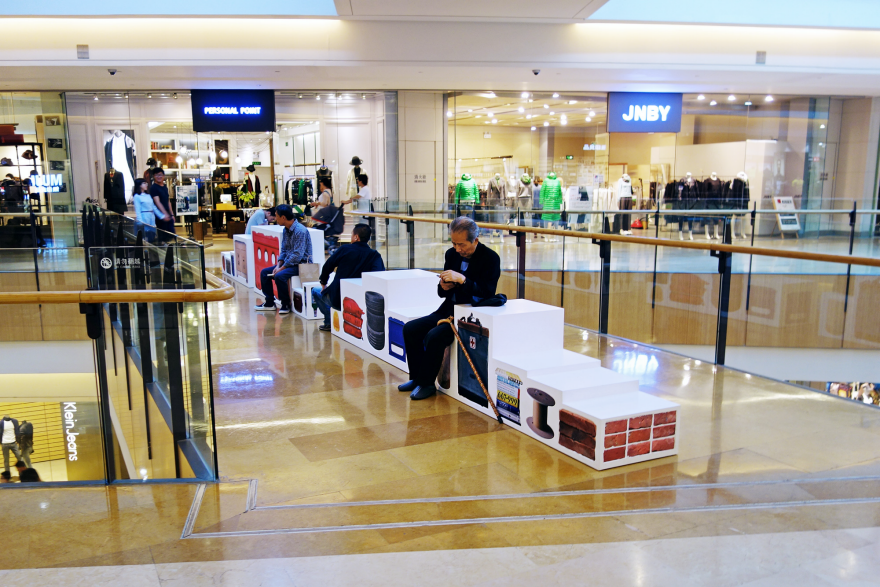 It's a funny concept, actually, presenting these ad hoc stools graphically, printed on a series of rectilinear objects, each measuring slightly larger-than-life scale and arranged as a single linear seating unit. For a seemingly straightforward concept, there's a lot to unpack: The basketball, for one, evokes a Jeff Koons equilibrium tank. The fact that the volumes overestimate the dimensions of the original objects means that each would make a perfect plinth for its "contents"; the larger size also implies that the original object might be encased within, either boxed up in foam or otherwise packaged for shipping and safekeeping. 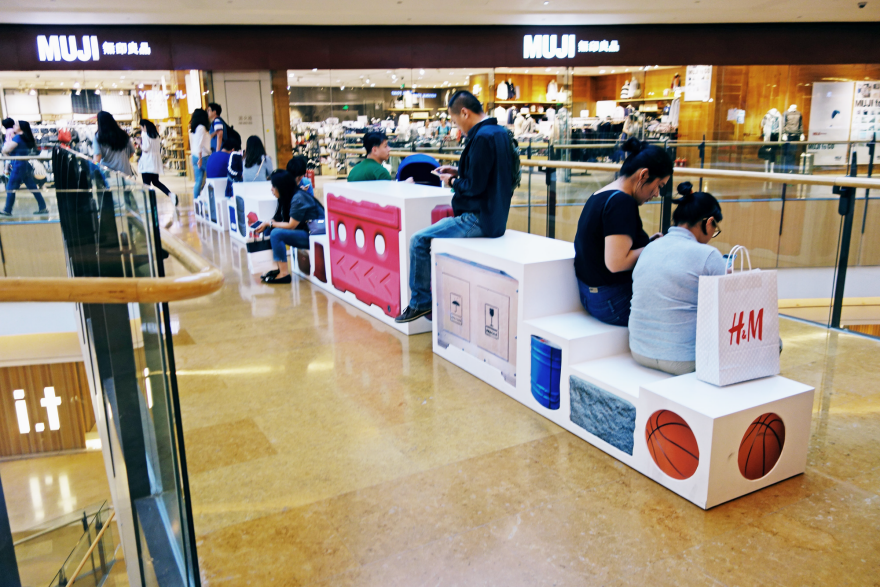 Yet the objects have been flattened into pictures; stripped of their utility, their function is reduced to sitting, to the effect that they are useful precisely because they have been made sculptural. As a series of white cubes, the “Ridiculous Bench” might be construed as a gallery that has somehow been turned inside-out — a fitting metaphor for “INDIGO – Designed to Delight.”

Postscript (10/13/15): Hughes sent an update, noting that “last year [at Caochangdi,] we probably got around 4,000 visitors in total. This year, the show was on for three weeks and INDIGO register around 20,000 visitors per day!”