The Nine Safest Cars in America, and Volvo is Getting Closer to their Overall Zero Volvo Deaths Goal

We are winning the automotive safety war, and here's Volvo's take on the autonomous vehicle they'll have ready in four years

In 2007 in America, no matter what kind of car you drove, someone else had died in that exact model. With over 200 million licensed drivers in the U.S. driving everything under the sun, that's to be expected.

But what the Insurance Institute for Highway Safety found last year was staggering: The data showed there were nine car models that not a single person had died in (we assume they're using U.S.-only data). Tracking all new-model cars from 2011, by 2015 the following models had zero fatalities: 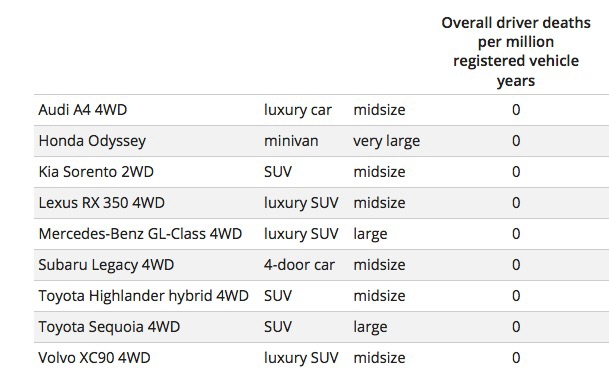 The data contains some surprises, as you'd imagine that only the most expensive cars would contain the best safety features. But it's also possible, of course, that drivers attracted to the lower-cost Kia Sorento are not the type who are liable to wrap it around a telephone pole while doing cocaine and Instagramming at 95 miles per hour.

One non-surprise is that Volvo made the list, as they've been leading the safety charge for decades. (They were the first to ditch plate glass way back in 1944 for a laminated windshield, introduced the three-point seatbelt in 1959, added side airbags in 1994; there's a laundry list of their firsts here.) And this week it's all over the news that Volvo has announced a "death-proof" car by 2020, stating that ""By 2020, nobody shall be seriously injured or killed in a new Volvo."

Volvo actually made this claim way back in 2008, as part of their Vision 2020 initiative; good on them for sticking to it. The initiative appears to be back in the news now because with autonomous cars a sure thing, their claim sounds less like optimism and more like certain truth. Volvo has announced, after all, that they'll be selling autonomous cars in just four years' time. "With the development of full autonomy we are going to push the limits of automotive safety," Volvo safety engineer Erik Coelingh told CNN Money, "because if you make a fully autonomous vehicle you have to think through everything that potentially can happen with a car."

Speaking of which, I have always wondered how auto designers planned to handle, from a UI perspective, the changeover between the car driving and the driver driving. Here we get a glimpse of how Volvo thinks it should work, embodied in their Concept 26 car:

I might need those two paddles to first provide a shot of espresso, but the interface seems doable.

Lastly, congratulations to Audi, Honda, Kia, Lexus, Mercedes-Benz, Subaru, Toyota and Volvo for making the list. With any luck the list will be shown to have expanded when the new data becomes available.

The Nine Safest Cars in America, and Volvo is Getting Closer to their Overall Zero Volvo Deaths Goal