Seeing the Big Picture: An Interview with Artist/Designer Ellen McFadden

"How do I simplify it all? Down to a few short lines—to sift and sort—I get lost." - Ellen McFadden

I picture her hunched over her computer, surrounded by her paintings, as 87 years of images, colors and impulses run through to the tips of her fingers. I found myself charmed by the Portland-based painter Ellen McFadden's charisma, her self-effacing wit, and perhaps above all else, her struggle to organize all this life—the one she's imagined on canvas and the one she's lived with all of us—into a few sentences for our interview. 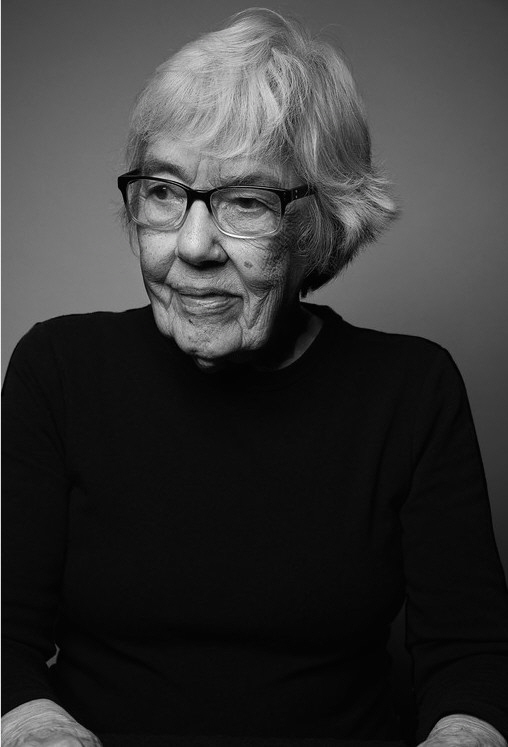 You seem to have always been making art. So let's go back to the beginning: do you recall an initial moment or a period in time when you first discovered this passion?

The first time that I really experienced "art" was in the fifth grade at Kerns grade school (1937, the Great Depression). There was no "art" program but the teacher had us color patterns on gridded paper. I had a box of crayons, not many others did, and I colored patterns and completed the project. The teacher then chose mine and mounted it on her desk, I was in love with the two dimensional surface forever after.

And beyond that, can you recall an early experience that demonstrated the importance of art in your life?

First, I had an amazing high school art teacher at Girls Polytechnic, a Portland high school that unfortunately no longer exists. As a student I also was very familiar with local and Alaskan Native American work (I had lived and worked in Alaska). Starting in 1939, I spent many years taking Saturday classes at the Portland Art Museum School, and I eventually became a full-time student. During that time, I was one of a few students that helped C.S. Price in the later years of his life. He and I became quite close.

You've worked in design, taught, and worked as an artist. How do these fields intersect? Or how did these worlds come together to form your work?

My husband, Irwin McFadden, followed the Neue Grafix approach in all of his design work through his years at Washington State University and the University of Iowa. When Irwin and I were both working and teaching at the University of Iowa, we met Ilya Bolotowsky and others. I also met George Rickey, the sculptor, and designed signage for his work.

How have specific locations and times influenced your art?

I followed the new global modernization of design that first came through to America in the Swiss publication Neue Grafik, as well as the influence of the Bauhaus. Then came The Responsive Eye exhibit in Seattle. Another very strong influence for me was the Native American work (it was never thought of as "art") that I experienced in my own area of the Pacific Northwest.

In the last two decades you began to focus more seriously on independent work and your paintings. What inspired that decision? And what inspires the direction of your paintings?

After 20 years of teaching, plus 15 years developing and supervising a work-study information design program with Hanford Nuclear and Kaiser Aluminum, plus other sites while teaching: it was time to retire. After retiring, I had the time and not the responsibilities. And the paintings are a continuation of seeing space, seeing color interact on that space.

Seeing the Big Picture: An Interview with Artist/Designer Ellen McFadden