Don't Get a Job: 6 Strategies for Making Your Own Job

In Gem Barton's new book, the traditional prospect of "Getting a Job" has faded away

The path to "success" for creative professionals has seen a marked shift in recent years. The traditional sequence of getting a degree, building a portfolio, going on interviews and eventually settling down at a firm is no longer a given—more and more, designers are not focusing on "getting a job" but rather on "making a life."

In her new book Don't Get a Job...Make a Job, designer, writer and educator Gem Barton highlights a crop of "new-generation trailblazers" that are carving out alternative ways of operating within the field of design. 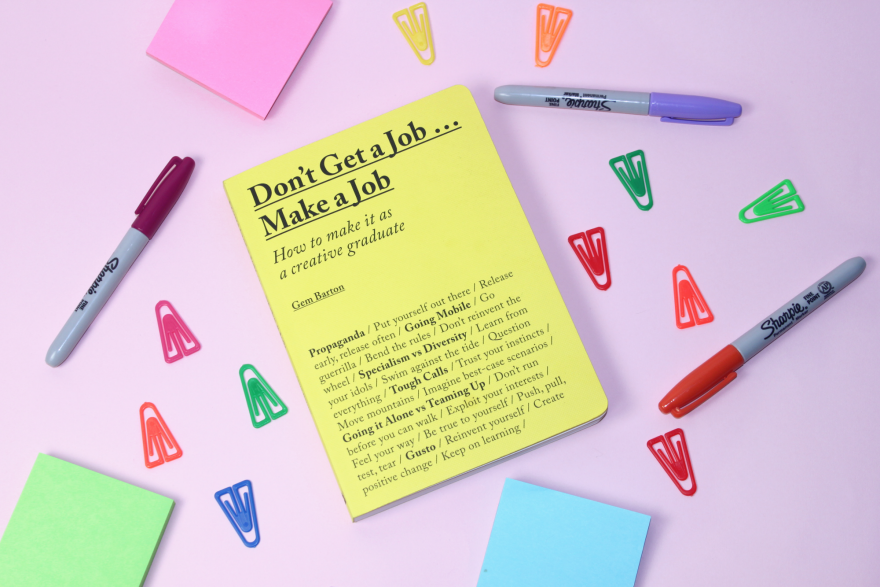 It might seem counter intuitive in our risk-averse world that young designers should embrace the unknown and go out on their own. Barton attributes much of the changes taking over the work landscape to necessity born out of the 2008 recession. When "the jobs dried up...the strong and the inventive found new ways to approach clients, to set up a practice, to specialize, diversify and subvert the traditions. While a terrifying time to be in the midst of, this is the time when new traditions are made, legends begin and the clock restarts." For Barton, designers working today have a new sense of responsibility to define their unique role and pursue it actively. Ultimately, she believes, the future will be shaped precisely by those "free-thinking, forward-looking, rule-bending, problem-solving, question-asking" individuals who are finding ways to activate the fringes.

Divided into seven sections that explore big-picture ideas, from "Specialism vs. Diversity" to making "Tough Calls" and "Getting the Most Out of Your Education," the book explores its themes by looking at specific case studies and getting inside the strategies and work processes that actual designers, including Sam Jacob, Something & Son and Jason Bruges, have used to ditch the 9-5 and start their own studios and businesses. In their own voice, the designers share the struggles they encountered along the way and reveal the emotions, gut reactions and instincts that propelled them forward. By collecting a wide range of diverse narratives and points of view in one place, the book surpasses the typical "How-To" guide and sets up a space for conversation and debate about what it means to be a designer today.

We've culled some of the most insightful takeaways from the book below:

Making your work accessible has never been easier, so why rely on traditional forms like CV's or portfolios to show people what you can do? There are so many innovative ways that designers can use social media platforms to share thoughts and ideas—find ways to innovate a little bit every day and connect with likeminded people. Even if your work is not yet fully fleshed-out, starting a presence early on and engaging viewers (and potential clients) in the development of your work can be a valuable interaction. "Allowing others to see how your ideas grow enables them to become invested in you and understand your process—people like what is familiar to them," notes Barton. "But be careful not to give away too much. You own the ideas when they are in your head, be smart about how much you share."

Go to the clients, don't make them come to you 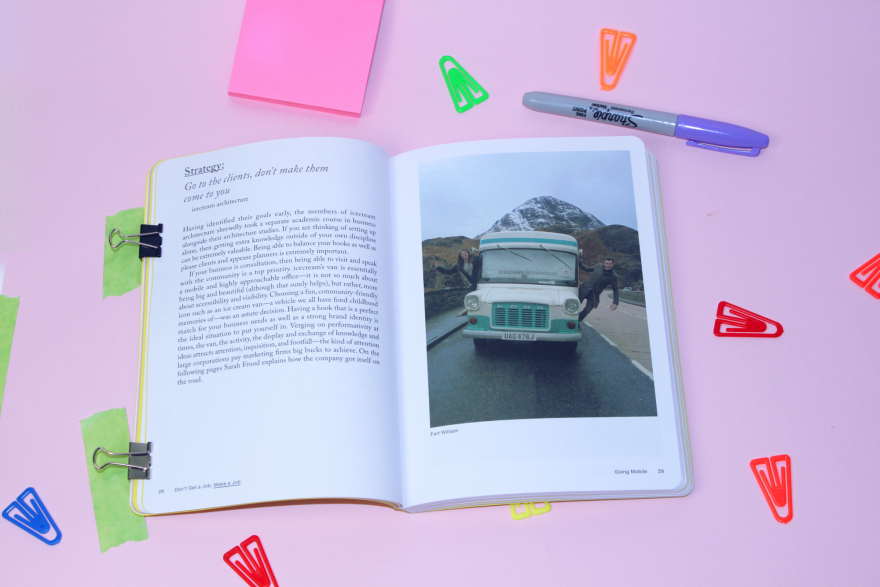 Soon after their founding in 2009, icecream architecture started using an ice cream truck to get around. Adopting a community-friendly icon not only gave the designers a strong visual identity right off the bat, it also reinforced their desire to practice architecture in an alternative way. "The exposed nature of the van instantly removed any barrier that might prevent people from approaching us," explains co-founder Sarah Frood. "The van quickly became a hook and a tool for engagement. It took us out of town halls and into the streets, and in a very practical way or ethos as a practice was personified by our brand and by the van." As Barton concludes, the key takeaway from this case is that "having a hook that is a perfect match for your business needs as well as a strong brand identity is the ideal situation to put yourself in."

Build best-case scenarios in your imagination

Jimenez Lai, founder of Bureau Spectacular, believes that there is no way to manifest the best future possible for you unless you give yourself the space and freedom to dream a little—or a lot. "If you have the courage to build a best-case scenario timeline in your imagination, that reality is already as good as real," he says. "My advice is: write a few 'fake' CVs for versions of your future selves—craft them, let your ambition run wild, project a few futures. No one is watching and there is no sense in feeling ashamed about these fake futures. I promise you, as you print them out and hold your plural futures in your hands, you will gain a deep sense of clarity about what you want to do and what you do not care about."

Even within a team, you need to be an individual

When you're thinking about taking the big leap and going out on your own as a designer, teaming up with like-minded people can be an intriguing route. Together, you can buffer some of the risks as well as create a support system and channel your excitement and energy to achieve a common goal. But, as Barton reminds us, in a partnership it is especially essential to retain your individual personality and not lose sight of what is important to you. The relationship you forge with your partner(s) can be thought of as a "framework to pursue your own individual interests and support each other in the process." 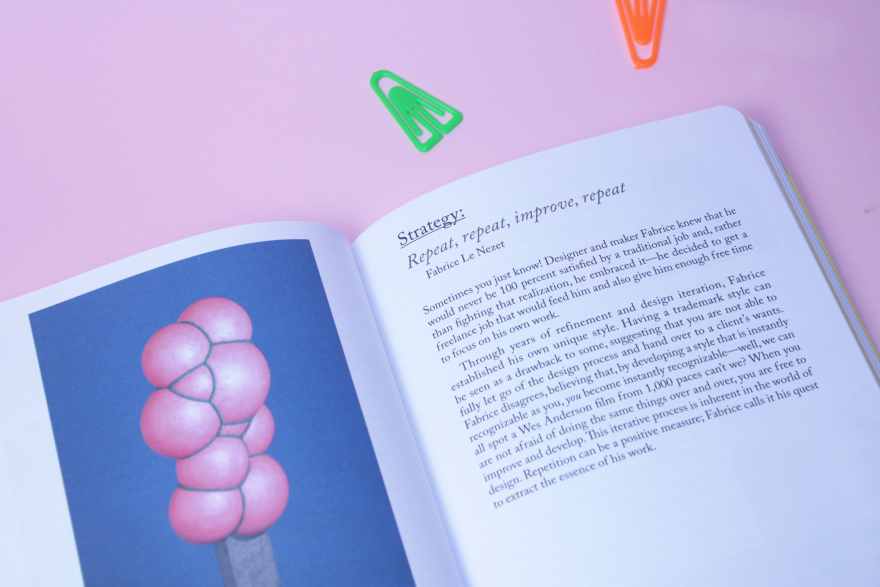 Designers always have to balance client needs with their own vision—being specialized yet remaining adaptable. Having a trademark can seem like a drawback if it makes you too regimented in your approach, but Barton argues that developing a distinct style won't pigeonhole you, it might actually open more doors. "By developing a style that is instantly recognizable as you, you become instantly recognizable," says Barton. "When you are not afraid of doing the same things over and over, you are free to improve and develop." Once you've "extracted the essence" of your work, every project you work on will function as an advertisement for your unique skill set and sensibility.

Don't wait for things to happen

If you had to boil Barton's book down to one key take-away it would be this one: "if you cannot find an opportunity that you like/want, you owe it to yourself to make your own." To illustrate this point, she gives art director and illustrator Mega as an example. Once he identified that he wanted to art-direct publications he didn't let a lack of work samples dictate what he could or could not do—instead, he created his own magazine to showcase his skills and get his foot in the door. Going a step further, once he started taking on clients and realized that it was hard to find a dependable freelance illustrator to collaborate with, he learned how to make illustrations himself—he expanded his skill set and never let the client see him flinch. "Being able to spot niches in the market, identify opportunities and close in on them before everyone else has had their breakfast is priceless. Be active, be busy, do things!"